All-electric, but previously upmarket-only, Tesla now has a saloon in the premium fleet driver's - read BMW 3-Series - heartland. Can it really fit the bill for business?

So many new cars are slight variants of something else, upgrades on previous models, or tweaks of once original ideas. The Tesla Model 3 by comparison feels like the car that could finally catapult the innovative but sometimes troubled electric vehicle (EV)-only brand - and indeed full-electric motoring full-stop - into the (premium) mainstream.

Of course, a vehicle range between £36,490 and £49,140 (including government grant) isn't in every company car driver's price bracket, but Tesla's own calculations suggest a monthly lease of around £406, which, once savings relating to low-cost electric recharging vs regular re-fuelling are factored in, could equate to £248 per month.

Despite asking several times, Business Car got no advice from Tesla spokespeople regarding any preferential fleet treatment, extra service levels, or even advice or call centres that might soon be available to fleet managers seeking to buy multiple Model 3s.

Some might argue that after five years it is early days for the brand in right-hand drive form - Tesla claims 22 UK showrooms and service centres so far - but the mainstream appeal of the Model 3 should see a flurry of activity, and eight more service centres - from Belfast to Southampton - are billed as 'coming soon' on Tesla's website.

With full EVs due to garner 0% BIK from April 2020 - a Model 3 delivered before that date will still attract a 16% BIK charge - it is fair to expect that Tesla should soon receive more interest from UK fleets.

Anticipating that, we drove the entry-level 254-mile Standard Range Plus model in rear-wheel drive at £37,340. Pricier, quicker and longer-legged all-wheel drive versions come in Long Range (348 miles WLTP and £46,340) and top-spec Performance form (329 miles, £49,990 and 3.2 seconds to 60mph). That is seriously rapid, but the Standard Range Plus model is no slouch either - 0-60mph in 5.3 seconds - and in real-world terms that equals a car that always feels like it has got the punch to quickly overtake or get out of the way of trouble. It feels wonderful for that. 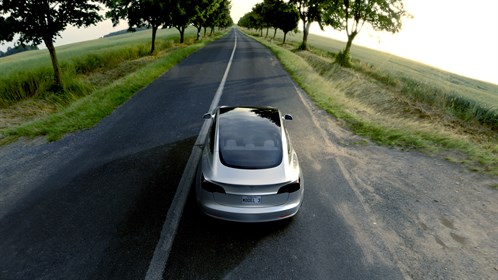 One thing that is less wonderful about the Model 3 compared with other recent new EVs is the level of regenerative braking (adjusted by touchscreen). 'Standard' feels far too harsh for most scenarios, like it is stopping progress rather than just merely slowing it down. The only other 'regen' option is 'Low', which would be our preference for everyday use.

The Model 3's steering is neither over-firm, nor over-light, and makes the car easy to manoeuvre, while progress is (as with almost all EVs) super-duper quiet.

Tesla's Supercharger network, despite some expansion into destination locations such as hotels as well as along trunk roads at motorway service stations, is still far from comprehensive. Below the Thames into south London and the south east to Brighton and Kent, they are conspicuous by their absence. Luckily, our Model 3 also had a CCS cable for rapid charging or even slower-paced overnight charging via non-Tesla chargers. This is sensible and a range anxiety reducer if you don't have off-street parking and home-charging options.

What is less good? The rubber mat on the diagonal part of the centre console below the centre touchscreen intended to hide fiddly wires when connecting smart phones is flimsy, and maybe in pursuit of an otherwise beautifully minimalist cabin, almost every function is adjusted via the touchscreen, which can make finding certain features a little hard, especially on the move. However, because the 15in screen is so central and large it is easy to reach, and its haptic feedback and speed is very good. You know very quickly if your command has registered - and it normally has.

There is so much more to say about this futuristic and original car that twice as much space wouldn't be enough. However, stand-out features include opening the car with a slim credit card 'key' pressed against the the driver's side B-pillar (or via your own mobile phone with the Tesla app loaded), finger-touch interior door sensor opening, a genuinely full-length glass panorama roof, not to mention the 'wow factor' when my kids discovered they could also use the main screen to play video games when the car was parked.

The Model 3 isn't perfect, but behind its relatively conventional-looking EV saloon facade, its high tech and original design detail and function is in a league of its own - and will be for a while to come too, as traditional makers scramble to catch up.