Toyota's striking C-HR is treated to a mild facelift and a new 2.0-litre hybrid powerplant. Is it still the SUV to be seen in?

We will never know exactly what the engineering department thought when Toyota's designers first presented the sketches for the C-HR, but we wouldn't mind betting it went something along the lines of 'what have those guys been smoking?'

Implications for crash testing, aerodynamic drag coefficients, brake cooling and over-the-shoulder visibility notwithstanding, given the outlandish looks of the thing, would anyone even associate it with Toyota?

Three-years-on and 50,000 UK sales later, those designers must be grinning like crazy cats from Cheshire. However, the original rendering was so profound, it pretty much ensured penning a facelift would be a very tricky undertaking.

Sure enough, the latest nips and tucks to the C-HR have been limited to mildly reshaped bumpers, a new lighting layout, a trio of fresh colours - including a vibrant orange for the 500 first edition cars - and a couple of new alloy wheel designs.

Inside, changes also amount to not much more than a lick and a promise. The dashboard gains plusher-quality materials and the doors are treated to some funky panelling, but otherwise things look very familiar. 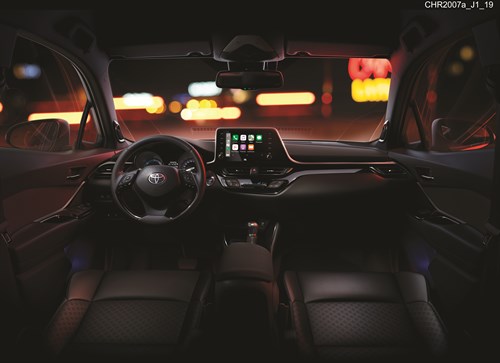 While the latest infotainment system remains on the petite side and is still a wee bit slow-witted, there are more physical buttons surrounding the screen, making one-shot command prods more assured while driving. The biggest news, however, is that Toyota has finally caved in to 21st-century demands and provided the C-HR with Apple Carplay and Android Auto connectivity.

With 80% of UK C-HR customers demanding hybrid powertrains, Toyota has ditched the 1.2-litre petrol engine and added an all-new 2.0-litre hybrid to the existing 1.8-litre version.

The 1.8 remains pretty much as is, although the electric motor now draws its energy from a smaller, lighter, denser-energy lithium-ion battery.

Somewhat at odds with this advance, the new 2.0-litre 184hp version sticks with the older-style nickel-metal hydrid battery, but you may forgive this, given that the 2.0-litre petrol engine is said to be 50% more powerful than the 1.8 and only 10% less fuel-efficient.

Overall, the 2.0-litre unit's performance is pretty wholesome and the powertrain is super-smooth - so much so, you will struggle to sense any mechanical transitions between electric and petrol modes as the CVT automatic transmission delivers the power to the front wheels.

Toyota has also worked diligently to reduce mechanical noise, vibration and harshness, as well as making significant advancements in software integration, to help minimise the peculiarities of the CVT, which typically allows the engine revs to soar exuberantly and create a distinct drone under forceful acceleration. To be fair, most folk will quickly learn to adapt their driving style to negate this rev-hungry trait by metering the accelerator pedal to stay just ahead of car's acceleration.

Toyota has also recalibrated the steering and the suspension of the 2.0-litre model. Consequently, despite its edgy looks, it is a surprisingly comfortable car and suspension component noises are well suppressed. In addition, the handling is predictable and secure, with plenty of grip, so even if you mess up and find yourself entering a corner a tad too enthusiastically, the C-HR's innate agility will do its best to sort matters out. 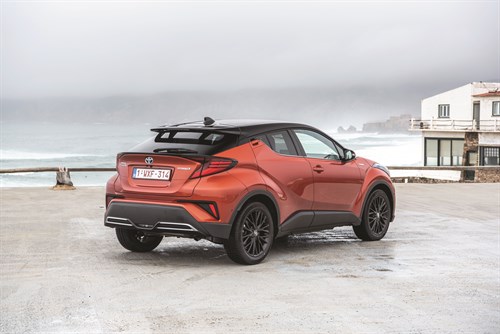 The steering itself is a bit on the soft side, feeling akin to driving with woolen mittens on, but it is appropriately weighted and the efforts you put in to negotiate a corner are mirrored by those you receive back as the steering unwinds.

Of course, before any of this can take place, you will need to mirror-signal-man alive. That is because the same design elements that make the C-HR look so distinctive, including those huge rear C-pillars, steeply inclined rear doors and dinky rear screen, do their utmost to obliterate the view of what is behind you.

It is not just over-the-shoulder visibility that suffers. Those same constituents also create a rather gloomy atmosphere in the rear quarters, making the somewhat limited headroom seem even more restrictive. More restrictions are also caused by the fact there is insufficient space under the bonnet to accommodate the 12V battery, so it abides under the boot floor, making the load bay very shallow and reducing usable space to a rather paltry 377 litres.

Just as well we are all suckers for a pretty face, eh?