Toyota's ditching of the legendary Corolla nameplate in favour of the Auris badge always struck us as one of the more bizarre corporate decisions taken over the last few years.

To reverse that state of affairs 12 years later and restore the Corolla name to pre-eminence, well, that is just downright baffling.

Regardless of naming shenanigans, the new Corolla will appear in showrooms later this month, and will be offered in three different body styles and with three different powertrains.

Alongside a niche-selling 4dr saloon, a 5dr hatchback and 5dr estate will round out the portfolio.

Of the three power plants, Toyota reckons the entry level 1.2-litre petrol engine will remain a relative scarcity and calculates that a pair of petrol-electric hybrids will make up the lion's share of sales.

The 1.8-litre hybrid, which uses a combination of a four-cylinder petrol engine and a 53kW electric motor, is effectively an upgraded version of the power unit found in the tried-and-tested Prius.

It emits impressively low levels of CO2, ranging from 76g/km-83g/km, depending on wheel size, so at the lower end of the spectrum, places the hatchback variant in a highly competitive 19% BIK bracket.

Move up to the all-new 180hp 2.0-litre power plant and you will be asked to pay a significant premium, as it is only available with higher trim levels, which places it in the sights of some pretty illustrious opposition.

Even so, a lowly 22% BIK rate means it is still a very attractive taxation proposition compared to similarly priced diesels. 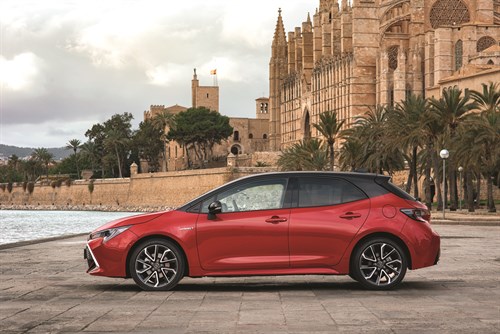 However, where the 2.0-litre hybrid really pushes home its advantage over its lower-powered sibling is in terms of driveability and refinement.

Although both hybrid power units are capable of deathly-silent running when tootling along in, albeit limited, EV mode and the transitions as the petrol engine is summoned into play are near seamless in both, the 2.0-litre's additional low-end torque means it is far happier working with the CVT gearbox's rather eccentric demands.

It is clear that Toyota's devotion to CVTs is unconditional and, theoretically at least, they are an efficient way of transitioning drive from the engine to the front wheels. They do require a considered approach, however.

Dish out a boot full of provocation and the engine will make a beeline for the red zone and doggedly cling to it until you either match your road speed to the revs or tire of the mechanical protests and back off the throttle.

With more engine torque and stronger electric motor assistance from the 2.0-litre unit, there is less need for sustained throttle abuse, and with it, less mechanical cacophony.

The 2.0-litre models also come with additional internal soundproofing and laminated side glass, and these enhancements make a world of difference. So much so, that the 2.0-litre Corolla is tangibly quieter and considerably smoother than the 1.8, both under acceleration and when cruising at a steady state.

If the 2.0-litre sounds right up your alley, then you should be aware of one penalty of the non-monetary kind.

There must have been oceans of blood on the carpet the day an unfortunate engineer announced that although there was sufficient space under the bonnet for the new 2.0-litre power plant, there wasn't any room left over to accommodate the battery.

As a result, the battery ended up in the boot, forcing the floorboard skywards and reducing capacity to a paltry 313 litres. The 1.8's boot measures a more palatable 361 litres.

Regardless of powertrain, rear legroom in the hatch is not exactly generous, so if space is a priority then you will be better off with the Touring Sport.

With its stretched wheelbase, the estate offers an additional 60mm of rear legroom and because the battery is packaged in the larger rear wheel arch, this frees up an unmolested 520 litres of load space. 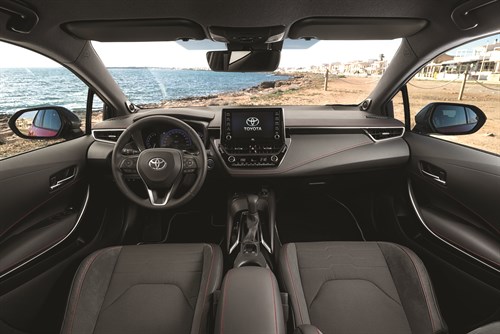 Up front, the Corolla's dash features an interesting mixture of colours and textures, and a large infotainment screen surrounded by some hard function keys. Not that there are that many functions to prod, as the Corolla isn't available with Android Auto or Apple Carplay connectivity, although it's likely to arrive at some point. But it does feature a range of accident prevention and mitigation kit.

Although there are some subtle differences, both the hatch and the wagon steer sweetly, with a light, precise turn-in and pleasingly consistent weighting throughout the speed range.

Best of all, there is a plushness to the Corolla's suspension that bears easy comparison with many luxury cars. What is more, harsher impacts are dealt with in an acoustically refined manner, making the new Corolla one of, if not the, most comfortable car in the class.

If there is a downside to this cosseting approach, then it is that the lush vertical body movements permit a tad more bonnet lift under acceleration and more front-end dive under braking than you would experience in a VW Golf or a BMW 1 Series. That said, many will feel the additional comfort is well worth the compromise.