The original Rav4 transformed the way we viewed SUVs. A quarter of a century on and Toyota hopes its all-new Rav4 will have a similarly seismic effect.

When the original Rav4 launched it was effectively born into a class of one.

Pitched into a world of agricultural 4x4s that were primarily the preserve of hill farmers, the Rav4 completely transformed the landscape, offering sporty, hatchback driving characteristics wrapped up in a rugged, chunky body style.

Fast forward 25 years and you can't move for sport utility vehicles that owe their very existence to the Rav4. This sincerest form of flattery is all well and good, but it also represents a significant challenge for Toyota as the latest Rav4 attempts to re-establish its unique selling proposition.

It certainly differs in one key area; namely, its powertrain.

No other manufacturer has more experience of petrol-electric hybrids than Toyota and its unstinting confidence in the technology is evidenced by the introduction of an all-new hybrid.

The synergy of a 2.5-litre four-cylinder petrol engine married to an electric motor produces a wholesome 215hp in front-wheel drive form or 219hp when specified with the four-wheel drive, which carries an additional electric motor on the rear axle in order to boost traction.

Of course, the best bit about hybrids is their low CO2 output, which are claimed to be as little as 102g/km for the front wheel drive Rav4, with a similarly lowly output of just 103g/km for the 4WD model. This translates into a BIK implication of just 21%. 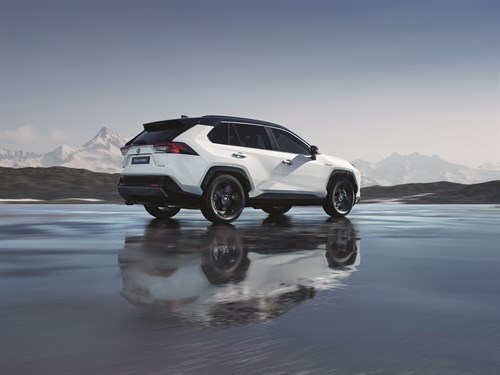 Hybrids operate most efficiently at low speeds and around town, where they are able to maximise their electric power, either to drive solely on electric power or by boosting the petrol engine's acceleration. They are, however, less frugal on faster routes when the petrol engine is doing the lion's share of the graft.

Even with WLTP data suggesting a combined figure of around 50mpg, if you are prone to banging in lots of motorway miles it may be wise to have a serious conversation with your drivers about their (and your) prospective fuel bills.

Although the engine is smooth and more than potent enough to fire the Rav4 along at a decent lick, the elephant in the room remains the rather eccentric CVT automatic transmission favoured by Toyota.

This is clearly the best iteration of the device to date, and in theory it is the most efficient way of delivering power to the driven wheels. Not that you would guess it, as a tendency to send engine revs soaring every time the accelerator pedal is pressed firmly is a trait that many may struggle to get on-board with.

Pronounced engine note aside, the Rav4 is a very refined car to barrel along in. The suspension is well judged and although it favours comfort over agility, it is generally excellent at controlling lateral body movements, and dials out ruts and ridges with some aplomb.

The downside to this cushy approach is that, on twistier routes, you will notice a fair bit of body lean and a tendency to run out of front-end grip quicker than you might expect. Thankfully, the steering is accurate and nicely weighted, which will let you know exactly what is going on long before things get excessively slippery.

The latest Rav4 may look like it was designed with the aid of a potato peeler, with an abundance of chiselled body panels and squared off wheel arches, but the designers haven't been allowed to take liberties with visibility.

It is easy to pull out of tight junctions and keep a watchful eye out for cyclists, thanks to narrow windscreen pillars and low-mounted door mirrors, and although the rear pillars are quite beefy, standard rear parking sensors and a rear-view camera are fitted to help you sling-shot the Rav4 into tight parking spaces.

Toyota has always built solid interiors but has often been accused of lagging behind European rivals when it comes to design appeal. Thankfully, although things still look a little utilitarian in places, the Rav4's cabin is pleasantly trimmed overall. 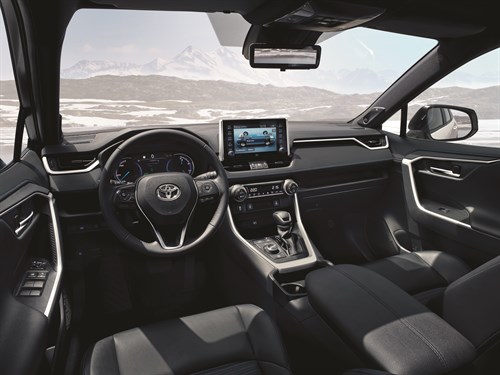 Unfortunately, the infotainment system is completely different gravy. With retro-looking graphics and a small, fiddly screen, it is a proper chore to operate when driving. What is more, in a world where Apple Carplay and Android Auto are standard fit on most rivals, Toyota has failed to deliver either.

Although the cabin is far from cramped, with sufficient leg and elbow room for five to travel in comfort, front headroom is a little on the tight side, while the rear seat cushions are set rather low, so smaller children may struggle to glean much of a view out.

The rear backrests do recline to provide some additional long-distance snoozing comfort, and as with almost every car in this class, they split-fold in a 60/40 to free-up luggage space, so you shouldn't have any problems slotting in your latest mountain bike.