The traditional fleet favourite has been given a thorough update, with a major emphasis on efficiency.

When most cars are given a mid-life update, or facelift, the usual trend is as the latter name would suggest - for a thorough going over of the styling to make it look as new and interesting as possible, while still being broadly the same underneath. With the newly-revised Vauxhall Astra, however, this is definitely not the case. Partly because you'd be very hard pressed indeed to spot exterior changes if you saw one drive by, but mostly because the internal revisions have been extreme.

This is especially true under the bonnet, because the entire previous engine line-up has been ditched. Instead there is now a choice of two 1.2-litre petrols with 110hp and 130hp, a 1.4-litre petrol with 145hp, and two 1.5-litre diesels with 105hp and 122hp. While the popularity of petrol in this segment is ever-increasing (and Vauxhall expects 85% of updated Astras to be powered by it) the diesels will be of interest to company car drivers since they meet the RDE2 emissions standard, meaning they avoid the 4% BIK diesel surcharge. We've seen a few such engines coming onto the market recently, mostly from premium brands, but the Astra is arguably the most mainstream application so far. The cleanliness of the new diesels doesn't unduly affect the driving experience, as the 122hp version tested here provides adequate grunt, although it can be a bit noisy, particularly at urban speeds. 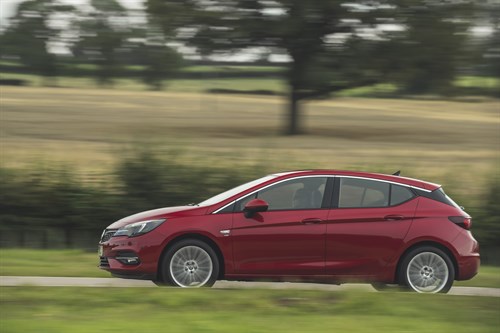 The list of available gearboxes has also been updated, meaning drivers can now choose from a six-speed manual, a stepless automatic (with the petrols) and a nine-speed auto (with the diesels). Paired with the diesel the six-speed manual is reasonable, although the shift action isn't the slickest. At least it avoids the slight hesitancy in response you get with the nine-speed auto.

The mechanical changes aren't only limited to the drivetrain. The suspension has been given new dampers, and the steering has been recalibrated, with the aim of improving handling at higher speeds. Unfortunately on the evidence of our test drive these elements could still be better. The suspension doesn't do the best job of smoothing out ruts in the road, and gets a bit bouncy on occasion, and the steering feels woolly. Otherwise the Astra is a pleasant steer, feeling nippy and agile when cornering.

While the Astra's styling hasn't changed much, the car's exterior has still received a significant going over in the name of aerodynamic efficiency. The upper and lower portions of the front grille can now open and close independently of each other, and airflow under the body has been improved with covers for the engine and transmission, panels at the front of the floor, and an enlarged fuel tank heatshield that doubles as an air deflector. The ride-height has been lowered by up to 10mm, depending on spec, and aerodynamically shaped control arms have been added to the rear axle. 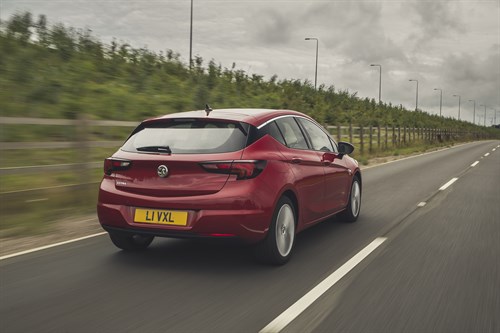 Vauxhall claims that all this saves 4.5g of CO2 per kilometre compared with the outgoing car. Together with the new engines, all this work has put it among the cleanest cars in the segment, and while there's not much to choose between it and deadly rival the Ford Focus on a cost-per-mile basis, that RDE2-compliance means a big BIK saving for drivers compared with the equivalent Focus diesel.

Inside, the Astra has gained updated versions of the various infotainment systems on offer depending on spec. The 8in touchscreen in the high-end Elite Nav car we tried is impressively responsive, picking up touches without hesitation. Kit levels on the whole are good, with standout features of Elite Nav cars including an 8in digital instrument cluster and both front and rear heated seats. While overall the interior at this grade isn't quite as plush as you might expect near the top of the range, with a fair few scratchy plastics around, some gloss plastics and soft touch materials have also been applied to improve the overall ambience. 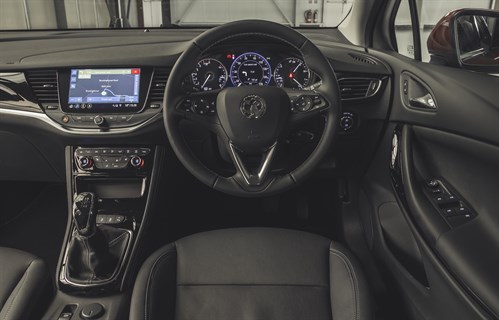 Finally, Vauxhall has moved to improve safety, with an upgraded front camera meaning the autonomous emergency braking system now includes pedestrian detection. It completes an impressive range of updates that makes the Astra a much more attractive fleet proposition, although still a bit short of the class's best.