The arrival of a new Golf is always a stellar event, but will the radical tech changes to the eighth-generation model prove a step too far for the seminal hatchback's traditional customer base?

It is crazy to think that before the first Volkswagen Golf was launched the brand's most notable model was still the air-cooled Beetle.

That probably tells you all you need to know about Volkswagen's unstinting commitment to a project - and may explain why 45 years on and 35 million sales later, the Golf remains the cornerstone of the Volkswagen empire.

Although the styling of the eighth-generation Golf hasn't strayed too far from the original's iconic lines and classic hatchback layout, drawing parallels between the two is like comparing Morse code and telegraph lines with wi-fi and Bluetooth.

The most radical departure, even from its most recent predecessor, is the way you interact with it. Dominated by two hi-definition, dash-mounted screens and denuded of many physical buttons, access to the various drive modes and infotainment menus is controlled by a quartet of dash-mounted, touch-sensitive prod points.

These provide access to groups of on-screen menus, which can be explored in greater depth, either by swiping the screen or by barking commands via an Alexa-style voice assistant.

It all looks very NASA, and the kaleidoscope of colours and wealth of customisation options is akin to peeling back the layers of a very large onion. 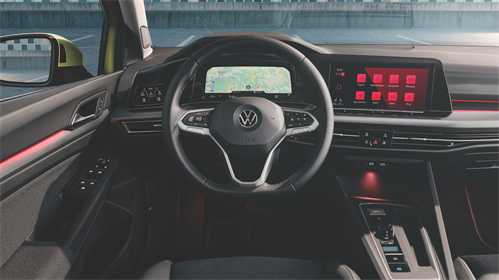 Unfortunately, because our prototype car was short of its final sign-off software, the activation speed and ease of use of many of the functions was very hit-and-miss.

What is more, operating the features that did work, including the slider-style cabin temperature controls and the cornucopia of toggle switches on the steering wheel, leads us to question the wisdom of replacing perfectly good rotary dials and switches with flashier, but ultimately less ergonomic devices.

The Golf has always been renowned for the quality of its interior fixtures and fittings, but you do get the impression some of the budget has been sacrificed. While the dashboard materials, door tops and switchgear remain superior to those you will find in a Ford Focus, there is certainly evidence of cost-cutting, especially in the rear of the cabin, where the plastics look and feel significantly inferior to those used upfront.

Interior space is almost identical to the outgoing model, so there is still more than sufficient space for four, while the large glass area and excellent all-round visibility ensure the cabin is a pleasant place in which to while away the miles.

At 380 litres with seats up and 1,237 with seats down, the boot is on par with the class norm, so it will easily cope with your daily requirements, but you will still need to fold down one of the rear seat backs to accommodate your golf bag.

As for power choices, there will be some familiar 1.0-litre, three-cylinder units, and a smooth and punchy 1.5-litre turbocharged petrol engine, which is likely to be the overall bestseller.

This is supplemented by a 48V mild-hybrid version of the same engine, which delivers extra low-end punch, smoother automatic gearshifts and quieter start-stop functionality. It is also claimed to improve fuel efficiency and we would like to tell you by just how much, but Volkswagen is refusing to release mpg and CO2 figures, despite the car going on sale in February.

The big fleet news, however, surrounds the introduction of the all-new 2.0-litre diesel engine, which uses a twin-dosing AdBlue system to reduce exhaust gas pollution by up to 80% compared with the outgoing diesel units. 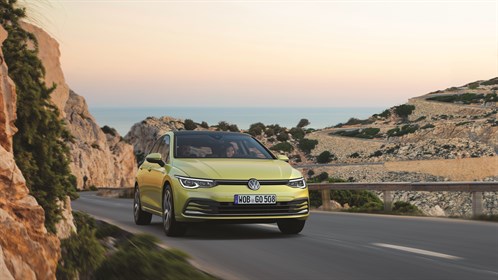 Although no official data was forthcoming, whispers suggest that the new motor could better existing technology by up to 17%, which should push the combined economy figure well above 60mpg.

The new engine will be available in two states of tune at 110 and 150hp, and you can have it with either with a seven-speed dual-clutch or six-speed manual transmission.

We have driven the 150hp version with the auto and although it doesn't sound as quiet as some rival engines of similar size (especially when asked to tackle steep gradients in the lower gears), it does generate plenty of low and mid-range pulling power, so it is easy to pile on speed using relatively few revs.

Based on our drive in foreign climes and fitted with DCC adaptive damping, which will probably be a £1,000 option, we would happily go out on a limb and say the latest Golf offers the smoothest ride quality, and the best suspension and tyre noise suppression, in its class.

It also features effortlessly smooth and wonderfully connected steering, even if some of the suspension's inherent comfort means the Golf doesn't change direction with the same eagerness as a Ford Focus.

Normally, we wouldn't hesitate to recommend a new Golf and we strongly suspect we will once again, providing the new car's tech issues are resolved and we get the answers to those critical questions over running costs.

For now, though, there is just enough of a chink in the Golf's armour to give rivals hope of finally breaking that stranglehold.