There is a new Passat in town and guess what? It is very similar to its predecessor. Fashion is fleeting while class is permanent seems to be the message.

No less than 30 million. That is how many Passats have rolled off Volkswagen's production lines since the model was first launched back in 1973.

Obviously, much has changed in that time, including an SUV onslaught that has done its utmost to render all other modes of transportation redundant. However, despite changing fashions, the appeal of the Passat remains resilient.

The new car or 'technical upgrade' is effectively a facelifted version of the current model, so the visual changes are subtle, to say the least. Shaved bumpers, a reprofiled radiator grille and the relocation of the Passat name to the centre of the boot are the most notable changes. Pretty small beer then, but you could argue that if it isn't broke then why fix it?

As things stand, the Passat is only outsold in its sector by fleet darling the Insignia, but the key here is that the Passat estate outsells the saloon by 2 to 1 - and it is easy to see why.

If you are looking for a premium image saloon there are plenty on offer from rival German manufacturers, but if you need an estate to do a job of work then a compact BMW 3 Series Touring or an Audi A4 Avant simply isn't going to cut it.

The Passat, on the other hand, is simply immense. Inside, other than the disappearance of the dash-mounted clock everything looks reassuringly familiar, which means every detail, from the smallest toggle switch to the minute LED lights in the headlining, is beautifully engineered, while all the panel gaps are laser precise. 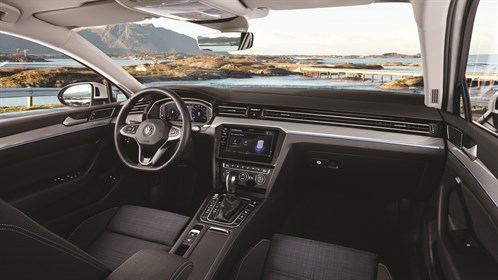 Equally, the driving position is a study in precision and almost infinitely adjustable thanks to an enormous amount of steering wheel and seat adjustment. There is loads of passenger space and obviously boot space is a key ingredient. At 650 litres with the seats up its already echoingly cavernous but throw down the split folding rear seats and that volume rises to an Albert Hall-rivalling 1,780 litres, making it easy to carry no end of long or awkwardly shaped items.

Supplementing these virtues is a range of new tech for 2019 that includes
semi-autonomous driving modes with adaptive cruise control that will automatically adjust the car's speed to the prevailing limit and influence the steering to consider oncoming bends in the road.

There is also a wide range of powertrains to choose from including 1.6 and 2.0-litre diesels, with power ranging from 120hp to 240hp. All the petrol engines are boosted by turbochargers and range from a 150hp 1.5-litre to a punchy 2.0-litre offering 190hp or 272hp. All very commendable, but the real jewel in the crown is the uprated plug-in hybrid GTE. With pure electric running increased by 30% to an official WLTP range of 34 miles - VW is remaining tight-lipped regarding official economy and CO2 figures - it is sure to create plenty of interest among those looking to minimise their BIK liability.

It is also a pretty impressive thing to drive. Select E-mode, employ a moderate accelerator application and the GTE slinks around near silently, and the claimed range seems easily attainable unless you start taking liberties with the 80mph maximum speed that is available under pure-electric power. 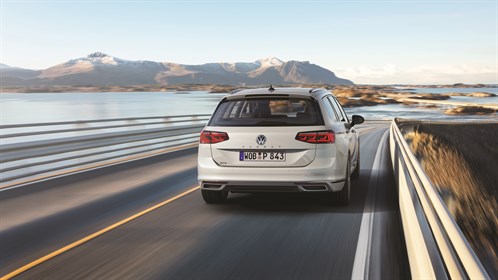 You can also decide to hold or top up the battery charge, which will seem like a godsend if you regularly sprint to work on the motorway only to hit city limits gridlock. There is nothing particularly trick about the 1.4 TSI engine, but it is smooth, and the mechanical transitions between electric and petrol power are verging on indiscernible. Additionally, there is a specially designed oversized central exhaust muffler to ensure the transitions remain acoustically refined.

The Passat has always been a sweet drive, despite the fact it is a large, heavy car. It is impressively hushed at motorway speeds and when fitted with optional adaptive dampers the ride is smooth and well controlled. Topping this off, the steering weights up sweetly with speed, giving you a strong impression of what is going on at the coal face.

All in all, the GTE seems like an immense amount of metal for the money - especially if estimates are confirmed at £36,000 for the saloon and £38,000 for the estate.