Bentley has abandoned its short-lived relationship with diesel and launched a plug-in hybrid. Is this enough to make a case as a high-end company car?

Bentley is not a brand that you expect to appear often on fleet choice lists. However, in the upper echelons of the corporate world, where senior directors are richly rewarded and staff retention is a significant issue, ensuring drivers can be seen in something that reflects their status is important.

The entry point to the Bentley brand lowered a few years ago with the introduction of the Bentayga SUV. Launched with the 6.0-litre W12 engine, the Bentayga was soon offered with an entry-level V8 petrol engine. In 2016, a V8 diesel was added to the range, but this has now been dropped.

Essentially superseding the diesel, power comes courtesy of a 340hp, turbocharged, 3.0-litre V6 petrol engine combined with a 126hp electric motor. Seemingly, Bentley had dibs on the powertrain that will soon be available in the Audi Q7 60 TFSI E. 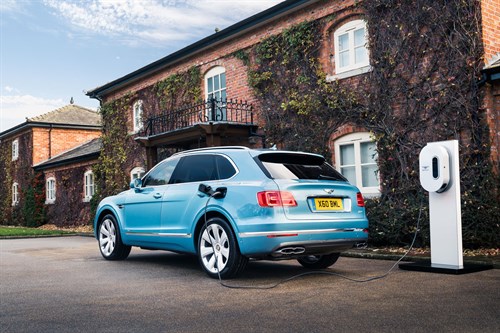 It is because the Bentayga shares its basic architecture with the Audi Q7, Volkswagen Touareg and Lamborghini Urus, so there are common elements among the brands that use them.

While completed Bentaygas leave the gates at Bentley Motors' historic Crewe factory, bodies are pressed in Germany and painted in Banbury, before assembly at the Cheshire facility. This kind of activity is part of modern automotive production.

The Crewe factory also has its craftspeople hand-finish aspects of the car, whether it is stitching leather upholstery or polishing wood veneer, to ensure a human element in the completed product.

Also, the specification process allows a greater degree of personalisation than with a Touareg. For example, there is two-tone leather available from a range of hide colours, as well as numerous trim elements. Bentley claims each example takes 130 hours to build - that's around two weeks' work, and substantially longer than the process for other expensive SUVs.

The craftmanship is easy to appreciate the moment you step inside the Bentayga, but other aspects of the interior seem a little out of place. The 8in touchscreen, for example, could be from the outgoing Seat Leon. I struggled to find a USB connector, and I suspect the lockable storage box under the front centre armrest (part of the 'Mulliner Specification' on our test car) might well have usurped the fitting of them. The car didn't connect to Apple Carplay or Android Auto, so music streaming is via Bluetooth. 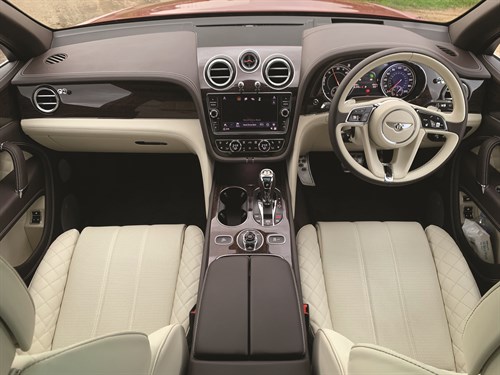 The option packs, or 'Specification' in Bentley parlance, allow customers to add features that might be welcome, but there is little here that you can't get on any other high-end SUV.

The Mulliner Driving Specification, at a cost of £12,030, adds 22in alloys, diamond quilting to the seats and doors, drilled alloy pedals, embroidered Bentley emblems in the seats, and jewel fuel and oil filler caps.

The Touring Specification adds adaptive cruise control and collision alert (perhaps you would expect them as standard), as well as a head-up display, lane-keeping assistance, and night vision, for £6,350. The optional Naim audio system is the same price.

We know Bentley customers will be ticking boxes like these, but it is easy to see how the P11D value is bumped up, taking the Bentayga Hybrid out of any rational business purchase. Too many of these items are available on other premium cars, which means the Bentley doesn't seem so special.

One positive is the exceptionally smooth ride - even on the optional 22in wheels - thanks to adaptive air suspension, and refinement is a cut above most of the rest.

Although Business Car is not a design journal, and I am fairly agnostic when it comes to how vehicles look, I do find it frustrating that Bentley's designers can only come up with stylised 'B' motifs in exterior design features, while grafting in some scalloped wings harking back to the 1950s as its current 'design language'. And while a mesh grille was purely functional in a 1920s endurance racing car, making it as prominent as it is on the Bentayga is never going to look subtle.

Bentley, with more than 100 years of heritage, deserves better.