Fiat's most successful model gains a new mild-hybrid powertrain - and this is just the precursor to an all-electric future.

As legend would have it, the original air-cooled Fiat 500 was all set to star in the Italian Job movie before some behind-the-scenes shenanigans intervened and a trio of Minis ending up on the silver screen instead. Talk about a missed marketing opportunity - but as they say, every dog has its day.

Reinvented in 2007 and facelifted in 2016 as the cutesy city car we all know today, no model has done more to save Fiat's bacon than the 500.

Key to this success is undoubtedly the retro-chic design (more of this later), but to help the 500 comply with increasingly strict inner-city emissions standards, Fiat is about to introduce a new hybrid powertrain. The electrification story won't stop there either, as later this year a new 500 powered solely by battery will hit our shores.

For now, we have driven one of the new Mild Hybrid models, which have a P11D starting price of £11,811 for a basic Pop version and a claimed combined fuel return of 53.3mpg, along with CO2 emissions of just 88g/km.

To be honest, touting these cars as hybrids is stretching matters somewhat, as power is generated primarily by a newly developed 1.0 three-cylinder petrol engine, with just a gentle prod of assistance derived from a small 12V starter-generator that draws its power from a compact lithium battery located under the front passenger seat. Perhaps the best part of the equation is the system also uses the electric motor to carry out smooth start-stop functionality, and it has the ability to switch off the petrol engine at speeds below 18mph and coast simply by selecting neutral. 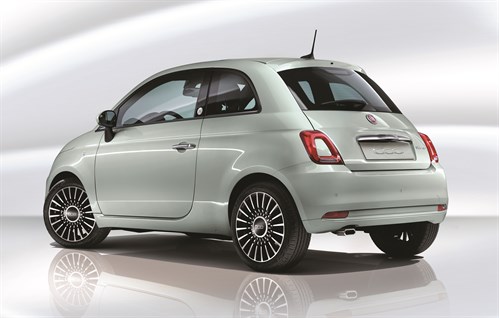 Overall, it is a pretty decent combination, as the petrol engine feels willing to rev and is reasonably smooth too, only permitting any obvious combustion signature to enter the cabin at higher revs. While it is clearly no ball of fire, the relatively modest 70hp power delivery does manage to feel man enough for the job under most circumstances.

One of the benefits of three-cylinder engines is the weight savings they bring, and in the 500's case, the engine is also mounted 45mm lower than the old four-cylinder arrangement, which is claimed to give it a modest agility gain - not that anyone ever bought a 500 for its edgy handling.

You can still expect a fair bit of lean in corners and some side-to side shimmy when driving over the type of crazy-paving that typically passes for UK urban roads. It is just a shame that the steering remains a bit vague and inconsistently weighted, while the clutch and brakes have a rather imprecise, mushy feel.

It is always striking just how high you sit in a 500, even with the driver's seat set in its lowest position. Despite this, and the fact there is very little adjustment for the steering wheel, it is relatively easy to find a comfortable driving position, thanks to a surprising amount of leg and headroom. Best of all, that bottle-nosed bonnet, dinky wheelbase and steering efforts that can be lightened to featherweight by selecting City mode, make the 500 an incredibly easy car to manoeuvre in tight city confines.

As suggested earlier, interior design is where the 500 really shines. The funky coloured seating, pool-ball gearshifter and painted dashboard, dominated by a grandfather clock-sized speedometer that displays info regarding the way the battery is being charged or depleted depending on how you drive, all combine to create a sense of simple, sophisticated elegance. 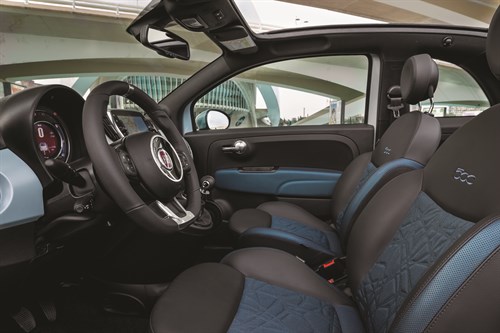 Despite its compact dimensions, the 500 offers a reasonable amount of cabin space for four, and it is a relatively easy job to get kids in and out of the back thanks to wide-opening front doors and a driver's seat that slide a long way forward. Admittedly, once ensconced, leg and headroom are on the tight side and those tiny triangular rear windows do limit the view out.

Boot space is also very snug at 185 litres; however, it is not a bad shape and you will manage to get a couple of small suitcases in without too much wangling.