Ford brings back an old name with its eyes on setting a new benchmark in the small SUV class.

You might remember the original Ford Puma as a Fiesta-based coupe from the 1990s. Well, now the name is back, but it returns to a motoring landscape in which coupes are out of fashion and SUVs are in. The new Puma is therefore a Fiesta-based small SUV, with which Ford hopes to do a better job taking on the likes of the Seat Arona and Renault Captur than it has with its existing competitor in this segment, the Ecosport, although that model does remain on sale. Since the current Fiesta is a brilliant and bestselling supermini, the omens are good for the Puma to be a success.

As you can see from the pictures, the segment shift doesn't mean the Puma is no longer concerned with style, although you can make your own mind up about how aesthetically successful the swooping body is. What we can probably all agree on, however, is that it is no good giving an SUV a sleek design if it comes at the expense of practicality. It is to the Puma's advantage then that, while it is based on the same platform as the Fiesta, the newcomer is not just taller, but wider and longer as well - indeed it stretches 146mm further than the Fiesta from end to end. 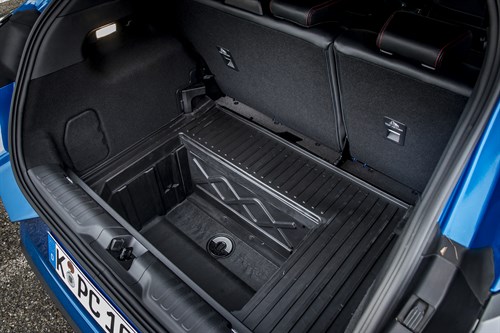 One of the advantages of this is a bigger boot, which is further aided by what Ford calls the 'Megabox', an area underneath the main boot floor that can be integrated into the main space for taller items, and also incorporates a drainage hole should the boot need rinsing out. It takes the boot to a large-for-the-segment 456 litres with non-hybrid powertrains, although the battery needed for mild hybrids like the one tested here brings it down to 401 litres. The luggage bay also features further neat touches such as a parcel shelf incorporated into the tailgate, and false floor supports that can be pushed flush with the sides of the boot (the false floor itself can be stored flush against the back of the rear seats).

The spaciousness is a bit less evident further forward. Space in the back is OK but nothing special, and while headroom in the front is fine without the optional panoramic roof, with it specced tall drivers might find it a bit tight. 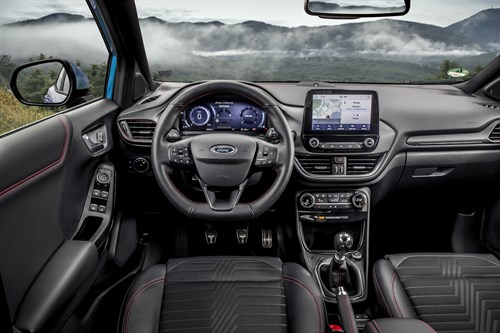 The interior trim on the ST Line X grade tested here has an appealing sporty appearance, but there is more hard plastic than you might expect from the current range-topper, although a more luxurious ST Line X Vignale should follow eventually (better-specced First Edition versions of the Titanium and ST Line X grades are also initially available).

The Sync 3 infotainment system with an 8in touchscreen is familiar from the Fiesta, but ST Line and ST Line X Pumas also get a 12.3in driver information display, which has only previously been seen in larger Fords.

Born to be mild

As mentioned above, the car tested here is a mild hybrid, another significant aspect of the new Puma range. Two 1.0-litre mild hybrid petrols are available - a 125hp version and a 155hp - along with a non-hybrid 1.0-litre, 125hp petrol. A diesel will arrive in a few months, as will a seven-speed automatic gearbox - a slick-shifting six-speed manual is the only transmission option for now.

The mild hybrid system uses a 48V battery pack to assist the petrol engine. According to Ford it is good for a fuel economy improvement of up to 9% on the WLTP cycle, as well as reduced CO2, although the system isn't really conspicuous while driving, instead working away in the background. For most drivers' needs the performance from the 125hp version will be adequate, but the 155hp engine is more flexible, at the cost of just over £700 P11D, 2g/km more CO2 and around 1mpg, with the extra grunt allowing the driver to hold onto higher gears more often. Both versions also offer a fun, rorty three-cylinder engine note when accelerating, although this doesn't intrude on cruising refinement. 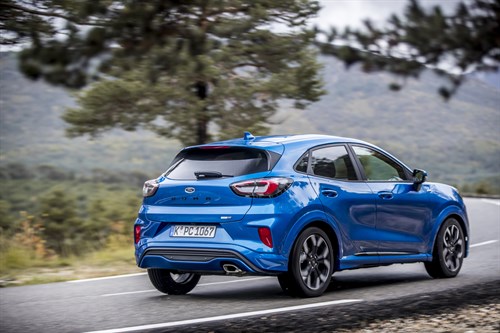 To drive, the Puma feels, rather as might be expected, like a slightly taller and heavier Fiesta, but given the Fiesta's outstanding driving dynamics this is not a criticism. For an SUV the Puma handles very well, and it is good fun using it to tackle a twisty road. That is not at the expense of ride quality either, even with the sports suspension fitted to ST Line and ST Line X cars, with a supple, well-damped ride that offers a good balance between comfort and body control. Selectable drive modes can also be deployed to tinker with settings such as throttle response, traction control and the steering, with the sport mode's subtle but effective livening up of the latter further improving the driving experience. Eco, slippery and trail modes are also available - despite the latter two, there is no four-wheel drive option.

It is not only drivers who are likely to be impressed by the new Puma - the cost sheet paints a happy picture for fleet managers too. Compared to equivalent rivals the mild hybrid system helps it to an impressive performance in official fuel economy and CO2 emissions testing, while strong predicted residual values mean it should also compare favourably on a cost-per-mile basis. It all adds up to a very strong overall package with little to count against it - it wouldn't be a surprise if Ford has another smash hit on its hands.