Honda has updated the Civic with a number of styling and equipment enhancements for 2020.

It can't be easy for vehicle manufacturers trying to flog traditional family hatchbacks these days. The market has clearly shifted toward SUVs, and some customers are also keen to know whether there is some kind of electrification.

The latest generation Honda Civic, launched four years ago, ditched its normally aspirated petrol engines for new, turbocharged VTEC units, while the diesel - always a significant investment for fiercely independent Honda going it alone - was improved to ensure it was fully compliant with the latest emissions rules.

The Civic has always stood out rather more than most mainstream hatchbacks, going in an alternative direction from rivals such as the Volkswagen Golf and Vauxhall Astra. The 2000 Civic adopted an MPV appearance, followed by the futuristic-looking replacement in 2006.

The following two generations were a development of that theme, but Honda's designers haven't been afraid to accentuate some of the styling features to enable the Civic to stand out further, resulting in an appearance that often polarised opinion.

It seemed to work well for the high-performance Civic Type R, but many would have found the styling-kit looks on the mainstream models a bit much.

However, as part of the 2020 revisions, Honda has introduced a Sport Line equipment grade, which mimics the appearance of the Type R more than any other version to date. It is offered on the 1.0-litre turbocharged petrol engine, perhaps going some way towards making people driving the entry-level petrol engine feel like they have something in common with the hot version. 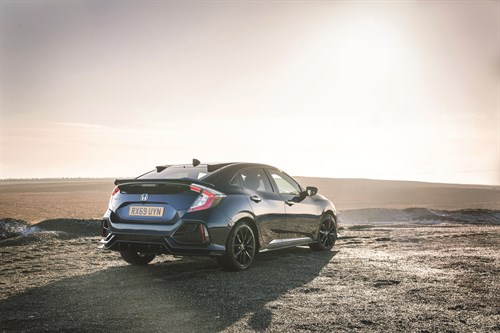 That is not to say the 1.0-litre is deficient in any way. With a maximum output of 129hp, and 147lb-ft of torque from 2,250rpm, it manages to deliver enough low-down acceleration for most needs.

The engine has CO2 emissions of 110g/km with the six-speed manual, or 107g/km when choosing the optional CVT automatic. However, anyone thinking the auto will deliver lower BIK tax bills would be mistaken - the price premium for CVT means it is less
tax-efficient than the manual.

The Sport Line is distinguished by lower front and side skirts, along with a rear diffuser, all finished in a high-gloss black finish. Window surrounds and door mirror caps are finished in the same high-gloss look. Inside the car, a unique and bespoke black leather seat is detailed with red stitching, exclusively available with the Sport Line models. 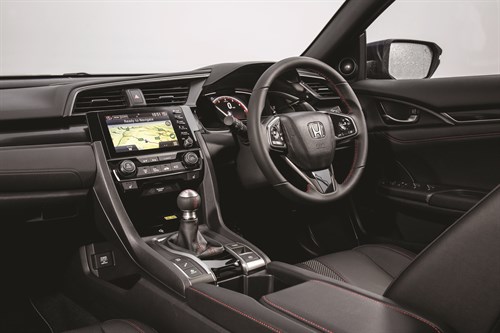 Interior changes across the Civic range include new materials to improve the perceived quality and a new gear lever for the automatic version in place of the button selectors. The Civic also now has physical buttons and dials for the infotainment and climate control (in response to customer demand) and the top versions come with an electrically adjustable driving seat.

This Civic generation was launched in 2017 and will continue until Honda moves out of the Swindon factory where it is currently produced in 2021. In some ways it was always a big improvement over its predecessor, with better handling and ride, and improved fuel consumption from the turbocharged petrol engines. However, it did lose a little of its versatility in the rear seats, with only the back folding forward. The seat part is fixed, unlike the previous Civic and the Honda Jazz.

After selling 4,000 units to fleets in 2019, it is still a good choice for people who value space and comfort in a traditional hatchback, while the brand's reputation for reliability is still strong.