Trust independent-minded Honda to come up with an EV city car like no other - but is it any good for fleet?

So many cars, even among the new breed of EVs, offer broadly similar features, but the new Honda E stands apart - and in more ways than one. Its simple but stylish exterior design is unlike any other car, and that is before factoring in its 'side camera mirror system' and flush door handles.

However, the Honda E's unique selling point is on the inside, with its dashboard-wide, five-screen infotainment system. Made up of one 8in driver display, two switchable 12.3in central infotainment screens and a pair of screens at each dashboard edge relaying rearward views captured by those compact exterior side cameras, the whole ensemble creates a world of possibilities that is equally accessible by driver and passenger (more later).

On sale in June 2020, Honda is marketing the E as an urban-focused, short-range (124-137-mile) EV. A DC fast charger adds 80% capacity in 30 minutes, while AC units can get the E to 100% in 4.1 hours. Much has been said about the E's small 35.5 kWh battery, but Honda says the weight and cost savings make environmental sense, as well as meeting the real-world range needs of the vast majority of its potential EV customers.

This is the same strategy as the Mini Electric and significantly, Honda is pricing its E at a similar level (and considerably less than the circa £35k predicted at the time of our prototype drive in summer 2019). After the government grant, the range starts at £26,160 for the 136hp, 137-mile E, rising to £28,660 for the 154hp, 125-mile E Advance.

Predicted sales this year are 2,000, but the fleet mix is initially predicted to be small, as Honda UK's head of car Phil Webb explains: "Corporate customers normally want to drive the car first and most of our orders so far are retail-biased, early adopters," he says. "But we are talking to small leasing firms, especially in London."

Only the higher-powered 154hp E Advance model was available to test. It has a lower 125-mile range on account of its 17in wheels, although you can opt for a 16in wheel E Advance with 137 miles too. It's spacious, open and light-filled up front, helped by its standard panoramic glass roof.

The multiscreen infotainment system dominates the E's dashboard but is easy to use and low-down enough not to be distracting. The central screens have a bank of direct-access digital buttons on either side to quickly get to radio and sat-nav functions, as well as 'back' and 'screen switch' buttons - the latter swapping the right display to the left and vice versa - to allow closer access to the part of the infotainment system each front-pew person wants at that moment. This two-central screen layout also means the map and one auxiliary page can be displayed side by side, which is super useful. With four USB ports and even an HDMI socket, remote devices can attach to play music, films and  even video games (when static). 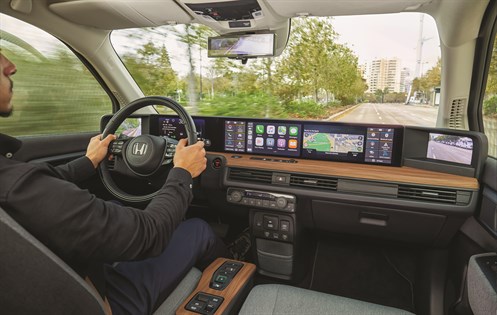 Safety wise, the rear-view interior screens beam crystal-clear images, even in different light and weather conditions. The central interior rear-view mirror, which also relays video of the view behind, can mist up, as its camera is behind the rear hatch's glass, but a quick swipe of the rear windscreen wiper quickly rectifies matters. Or you can use the mirror in a conventional way too, although we found it darker and less clear.

The Honda E's driving experience is excellent. The 154hp model feels EV-linear rapid (0-62mph in 8.3 seconds) while the rear-wheel drive set-up really does make driving fun. The steering is quietly focused and the tiny 4.3m turning circle adds to the E's agility. The 'single-pedal' driving button on the centre console allows you to do just that and with different levels of regenerative braking adjustable from the steering wheel paddles. If you fancy, there is also a Sport mode, to quicken responses.

In the negative column, the 171-litre boot is tiny, but the one-piece rear bench folds to expand luggage capability to 861 litres (up to the roof). Other downsides include only okay rear legroom, but then as a city car with limited range, long-haul comfort isn't as relevant. Real rather than fake wood would have been nice too.

Overall, the Honda E is a ground-breaking EV, from its design and drive to its multiscreen infotainment system. The latter especially feels way ahead of all other cars sold in the UK (large and luxury ones included). Drive and see for yourself.