Having previously sampled the range-topping diesel Tucson, we find out whether ditching diesel is really a good idea.

Last month, we tried the top-of-the-range diesel version of Hyundai's mid-sized SUV. Now we turn our attention to the most powerful petrol model, the 1.6 T-GDI, in the sporty N-Line equipment grade, and even though it is fundamentally the same car, it offers a surprisingly different experience.

The specific model we are looking at here is the 1.6 T-GDI DCT N-Line. To decode the alphabet soup for you, that means it has the 1.6-litre turbocharged petrol engine with 177hp and the dual-clutch automatic gearbox. N-Line is Hyundai's sporty equipment grade, which was introduced on the Tucson last year.

If this all sounds quite appealing, the big downside is that it emits 151g/km of CO2, putting it in the 34% BIK band. The manual version emits even more CO2, putting it in the highest 37% band. Thanks to the competitive P11D value and the generous equipment, you shouldn't rule the Tuscon 1.6 T-GDI out, but it is not as great a deal it might seem at first. 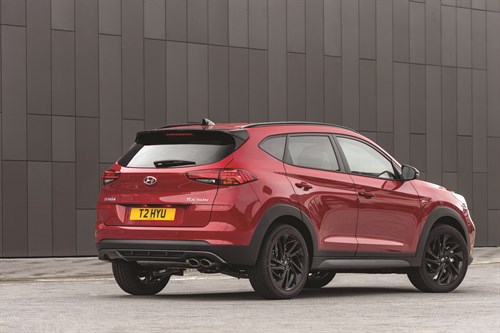 With the manual gearbox working out at a higher tax rate, the automatic is the obvious choice, although that may not be a good thing. Being a modern dual-clutch gearbox, the shifts themselves are lightning fast, but the software makes it very reluctant to downshift, therefore sometimes leaving you with a car that might as well have 77hp rather than 177. Once it does wake up, it has a tendency to change down several gears at once, setting the engine racing and even spinning the wheels. The conventional auto in the 2.0-litre diesel makes for much smoother progress.

The engine - when in the right gear - is more than powerful enough, and on a cruise is nice and smooth. The petrol engines don't benefit from the mild hybrid system that was introduced on the diesels - potentially a missed opportunity given that the 1.6 T-GDI averaged about 30mpg during its time with us. Curiously, the start-stop system, which was rather uncouth in the 48V diesel, is largely unobtrusive in the petrol.

The N-Line equipment grade is a worthwhile upgrade. Compared with the lower grades, it offers an upgraded infotainment system, a wireless charging pad, heated leather and suede seats, some sporty detailing, a smaller steering wheel, 19in wheels and sports suspension.

On a lot of cars, the latter only serves to make the ride more uncomfortable and not much else. While it does detract from the ride quality somewhat in the Tucson, it offers much more composed handling in return. N-Line doesn't turn the Tucson into a sports car (nor would you want it to), but it does give you more confidence in case you find yourself navigating some twisty country lanes. 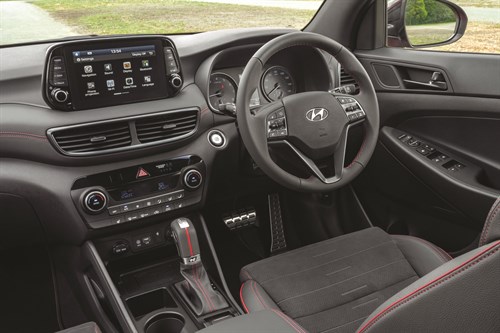 As with all the higher-spec Tucsons, the N-Line gets the 8in touchscreen infotainment system. It is one of the better systems on the market and has most of the features you need; however, it is not the most recent and is feeling its age somewhat. The best modern infotainment systems have huge screens and offer integration with the digital dashboard for maps and media. With this deep integration missing, it's easy to end up ignoring the native interface altogether and use Apple Carplay or Android Auto, which make the transition from your favourite music and navigation apps on your phone pretty much seamless.

The N-Line equipment grade, then, would be a good choice. The turbocharged 1.6 petrol, on the other hand, would not be our pick of the range; instead, we would opt for the 1.6-litre diesel. With a choice of manual or automatic gearboxes, 115 or 136hp, and available with the full range of equipment grades, it will suit most needs, and be rather more fleet-friendly thanks to its more competitive fuel consumption and CO2 emissions. Don't be tempted by the basic 1.6 petrol, either. Its 132hp output might sound like a happy medium, but a naturally aspirated petrol engine can feel less muscular than its figures suggest.