A major speed injection sees this quirky hot hatch demanding to be taken seriously - should we listen?

Regular readers may remember that we recently tested the facelifted version of the Mini Clubman lower-medium car, to which the changes made were very minor and purely cosmetic.

However, there is one model in the range that can't be said about - the John Cooper Works (JCW) hot hatch. In fact, the changes under the skin to this model have been fairly substantial, with the headline news being a big increase in power. From 231hp in the previous car, the new JCW now puts out 306hp - enough to upgrade its performance from merely rapid to very fast indeed. Official figures now show it can get from 0-62mph in less than five seconds, meaning it can stand toe-to-toe with some of the quickest hot hatches on the market.

Delivering all this power to the wheels is an eight-speed Steptronic automatic gearbox, with manual shift paddles mounted on the steering wheel, while four-wheel drive helps put that power onto the road. 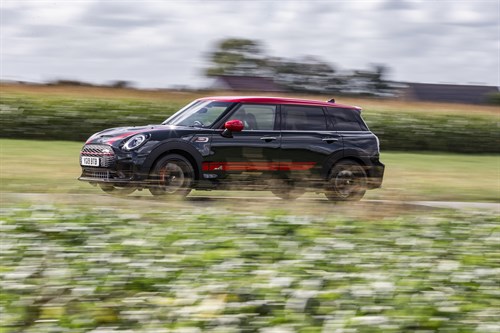 To go with the extra speed, Mini's engineers have carried out some chassis upgrades, including revising the suspension and upgrading the brakes, although an adaptive suspension system, which is also available, wasn't fitted to our test car.

The engine announces itself even before you reach the open road, with a conspicuous roar emitted when just moving away from a set of traffic lights, although it isn't the most tuneful for a performance car. When road conditions do allow the power to be safely utilised, it is fairly intoxicating, reminding you that not so long ago this sort of performance was the preserve of supercars. It makes a big impression, but unfortunately it is not one that the rest of the package is able to live up to in terms of driving engagement. The gearbox, for instance, could be quicker to respond to prods of the throttle in auto mode, and even when shifting manually with the paddles there is a slight delay before changes are made.

The suspension is firm, producing quite a rough ride, which in a car like this would be fine if it resulted in outstanding handling. However, the JCW doesn't corner particularly flat for a hot hatch, and while there is plenty of four-wheel drive traction we would like it to feel less weighty when changing direction. It is certainly not bad - the standard Clubman it is based on is one of the better drivers' cars in the segment - but the engine encourages comparisons with serious performance cars, and against that sort of competition the JCW's drive falls short.

A more impressive aspect is the interior, which is largely lifted from the regular Clubman, meaning the hot model retains a highly stylised yet high-quality feel, with superb infotainment. Distinguishing features here include JCW-specific seats and steering wheel, and rubberised stainless steel pedals. 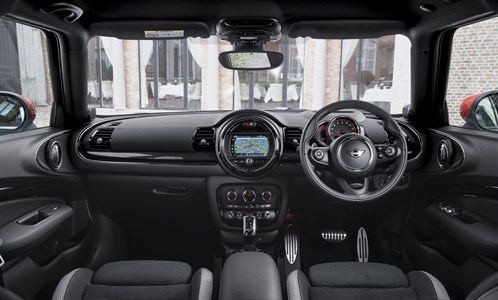 If your employees are being allowed to choose a car such as this then they are obviously getting plenty of leeway, and unsurprisingly the JCW incurs high running costs, with CO2 emissions of 169g/km placing it in the top BIK tax bracket, and official combined fuel economy of 34.9mpg. It is probably more instructive to compare it with a rival, and against the Mercedes-AMG A35 - another premium hot hatch with just over 300hp - the JCW is more than £2,000 cheaper to buy, meaning it incurs slightly less company car tax (although cost-per-mile figures are virtually identical).

Some drivers will undoubtedly consider the JCW worth a look, and its blend of quirky Mini style, the unusual Clubman base with its twin opening boot doors, and serious performance means it offers something genuinely different from the fast car norm. However, the lack of ultimate driving appeal means it is likely to be a niche choice.