Last month we reported on the second-gen Peugeot 2008's petrol unit - this month it's the fully-electric version's turn.

Peugeot's electric car history is longer than that of many makers. It offered the electric-powered 1941 VLV three-wheeler as far back as 1941 (to get around fuel rationing in Nazi-occupied France during the Second World War), an electric 106 in 1995 and most recently the iOn city car in 2010, but none sold in big numbers. Not even the latter rebadged and tweaked Mitsubishi i-MiEV. Blame the paltry 63hp motor, 0-62mph in 15.9 seconds, 93-mile range, and the iOn's high price, which made it lease-only to start with.

However, in 2020 the political and environmental times have changed and Peugeot is trying again, launching a full-EV version of the 2008 (and the 208 and Boxer large van too).

Peugeot's UK managing director David Peel told Business Car that he has earmarked 10% of total 2008 sales to be full-electric E-2008s. That equates to about 1,800 units, although he added that so far "60% of our online orders are for the EV, which is ridiculously high," and suggests more supply might be sought. In the meantime, to encourage take-up, Peel says Peugeot UK is making wall box chargers free for early EV adopters, plus it is chucking in six months' free public charging subscription via the Polar network operated by BP Chargemaster. As is now becoming typical, fast-charging 100kWh DC outlets will get an E-2008 to 80% full in 30 minutes, while more widely-available 7kWh AC points will get it to 100% in 7.5 hours. 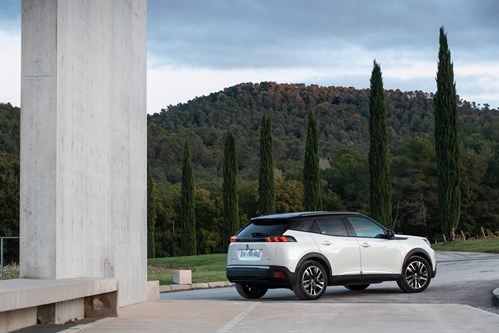 After driving the high-powered 155hp petrol 2008 back-to-back with the 136hp E-2008, it is surprising how much smoother, quieter and fun to drive the EV is. Achieving 0-62mph in 8.5 seconds adds three-tenths of a second to the petrol's 8.2-second result, but the E-2008 feels quicker and cuts the old iOn's time almost in half (to make a perhaps unfair comparison). EVs have come a long way in 10 years, and not just in direct speed. The e-2008 offers another 100 miles of range (193 versus 93), and also feels better bolted together and stable than the 'tall boy' iOn.

Controlling the E-2008 and preserving its battery life is straightforward too. As with many regular modern cars, the e-2008 has three driving modes - Eco, Normal and Sport - and also like many EVs, a few stages of regenerative braking, in this case labelled accurately 'Moderate' and 'Increased'. Use the regen levels with care and drive a bit like a good cyclist - coasting where pertinent and predicting the road ahead - and the brake pedal can almost be forgotten.

Usefully, boot space remains the same as diesel and petrol models at 434 litres minimum and 1,467 maximum, and the E-2008 even sports a few bespoke design details to subtly differentiate it from the rest of the range. These include a body-coloured and chequered-patterned front grille, 'e' badging on the side panel and rear hatch, and also a Lion emblem that changes colour depending on how the light catches it (for the record, Peugeot calls that 'dichroic').

Safety on the E-2008 is just as strong as on the regular engined variants, including lane and blind-spot assist function on the GT version. And best of all, as the car's April launch coincides perfectly with the 2020-21 changes to the BIK company car tax bands - this time in zero-emission EVs' favour - the e-2008 will start life with a 0% BIK rating, a massive drop compared to 16% for 0k/gm EVs under the soon-to-end 2019-20 year. 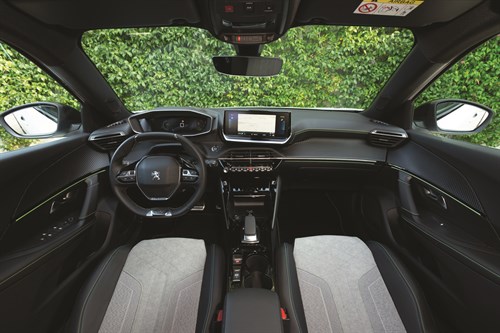 Pricing for the whole 2008 range starts at £20,150, but on the downside for
would-be electric car drivers, Peugeot's E-2008 models begin at £28,150 in Active trim, rising to £34,275 for the top-spec GT (after government grant). That pricing structure will reward EV customers choosing higher-spec models over lower-spec versions, as the price differential decreases from £8,000 between petrol and electric entry-level models, to £2,275 between the 155hp 1.2 petrol GT and the EV GT.

Again, like all powertrain decisions, one size does not fit all, but if your commute isn't too long, and access to chargers is good, the company car tax benefits and driving experience really do tip the scales in favour of the electric e-2008 over a regular 2008. It doesn't match the more powerful (204hp), longer-range (282 miles) and only slightly more expensive (£34,495 after grant) Kia E-Niro, but it is still a cracking new small SUV EV choice.