Renault's largest SUV gets updated engines and turns out to be excellent value, but does that excuse its lack of a third-row seating option?

If you don't want a large estate such as a Ford Mondeo or Skoda Superb, a big SUV like the Renault Koleos is about as much car as you can buy without going with a 'premium' car manufacturer like BMW or Audi.

It is going up against rivals such as the Skoda Kodiaq, Hyundai Santa Fe, Seat Tarraco and Peugeot 5008. However, it differs from the other contenders in its segment in two significant ways: its low price and its lack of a seven-seat option.

Renault treated its large SUV to a facelift late last year, keeping the engine and equipment grade line-up very simple indeed: There is a choice between a 1.7-litre diesel with 150hp and front-wheel drive, and a 2.0-litre diesel with 190hp and all-wheel drive. Whichever engine you choose, it comes attached to a CVT automatic gearbox. There are just two equipment grades - Iconic and GT Line. Iconic has all the essentials, while GT Line adds real leather upholstery, a larger infotainment screen, 19in wheels and an electric tailgate. We have been driving a 190hp GT Line car.

GT Line bundles nearly all the available options short of a panoramic sunroof and a handful of exterior and interior colours. With a P11D value of £32,910, it compares very favourably with the £35,815 for a similarly specced Skoda Kodiaq 2.0 TDI auto or £38,110 for a Hyundai Santa Fe 2.2CRDi. It turns out the Koleos is a bit of a bargain - as long as you don't need seven seats, that is. 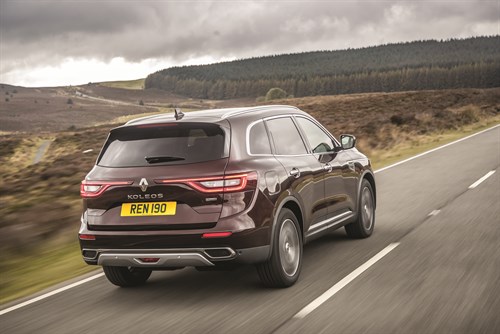 Even when CO2 outputs and resulting BIK tax are taken into account, the Koleos continues to stack up. The 2.0-litre diesel version falls into the highest bracket (37%), but so do its all-wheel drive, 2.0-litre diesel rivals. As a result, the Koleos is about £20 a month cheaper to tax than a Skoda Kodiaq for those in the 20% income tax bracket. The only comparable model that has a lower BIK tax is the Peugeot 5008, but that is because it is only available with front-wheel drive, resulting in a lower CO2 output. The 5008 is a good deal pricier, too.

If you just want the big car and aren't particularly interested in those two additional seats, is there a catch? You get the sense that the Koleos doesn't have seven seats since there is nowhere to put them, because at 579 litres, the boot is still smaller than most of its seven-seater rivals'. It barely bigger than a Mégane estate too. The infotainment system is quite poor, but thanks to Apple Carplay and Android Auto, that issue is easily ignored.

To live with, the Koleos 2.0 Blue dCi is a very pleasant machine. Continuously variable transmissions (CVTs) have a reputation for hurting refinement and driveability as they hold an ideal rpm, rather than having a set number of gears. Don't let that put you off the Koleos, however, because the system is well-judged. It is smooth, gives you power when you ask for it and doesn't set the engine racing at odd moments. Economy is perfectly acceptable too; during our time with it, its official figure of 40.4mpg was perfectly achievable.

Refinement is good, if not great. The 2.0-litre diesel is fairly vocal, but at a cruise, noise is suppressed pretty well. The ride, meanwhile, has quite a nice 'French' float to it, although potholes, ridges and other road imperfections make themselves felt a bit too noticeably. The interior gives a reasonable impression of luxury, even if the fake wood inserts are a bit apologetic. 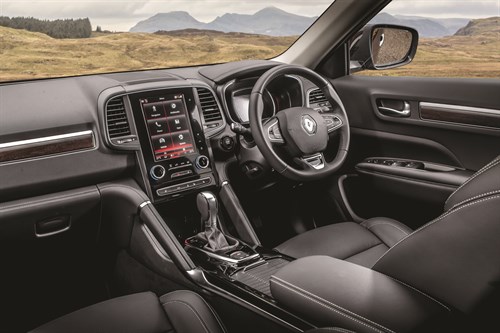 Our main reservation in the interior lies with the seats. Those expecting the soft armchairs that were traditional in Renaults of old will be sorely let down. They are quite hard and flat, with a seat base that is too short. Long-legged drivers in particular may find them tiring on a long drive as the legs aren't adequately supported.

The Renault Koleos dCi 190 is by no means a perfect car, but it is very good, and as long as seven seats aren't a requirement, a lot of its shortcomings can be forgiven because it is such great value.