Seat's city car is reborn as an EV for the budget-conscious.

When you opened this page, your first reaction may well have been 'That's not a new car'. And you would be justified, because fundamentally - aside from bigger alloy wheels and some badges - this is the same Seat Mii that has been with us since 2012, albeit with a facelift in 2017.

However, where previously it has been a conventional petrol-powered city car, the Mii has now been totally recast as an urban electric vehicle (EV), with non-electric versions no longer available in the UK. So, is it a successful transformation?

Well, the new electric motor produces 83hp, which doesn't sound like a great deal of oomph. However, while there isn't the same hot hatch-rivalling acceleration you get from so many other EVs, the instant torque you get from the motor means it is certainly sprightly enough compared with a typical family car. Its acceleration strangely resembles a train - put your foot down and it gains speed in a strikingly linear fashion, not especially rapid, but without much let-up either until you are at B-road speeds.

Seat clearly sees the Mii Electric as a city-based vehicle, but that doesn't mean it can't cope out of town; in fact, it is very comfortable, even on motorways, although here quite a bit of wind noise is noticeable, something it almost seems unfair to point out since there is no engine sound to cover it up. It also rides well here and in town, although it gets a bit choppier at speeds in-between.

Another positive is how, despite being a city car, it doesn't feel tiny from behind the wheel, and has good all-round visibility, so while its actually diminutive dimensions make manoeuvring easy, it isn't intimidating to drive in heavy traffic.

A more negative aspect is the steering - while its lightness is something that would normally be welcome around town, it is vague to the point where driver confidence suffers (when tackling roundabouts, for instance).

Perhaps a more serious failing is the Mii Electric's interior. It is spacious enough for a city car - passenger space is fine and the 251-litre boot is the same as the petrol version - but the problem is design. 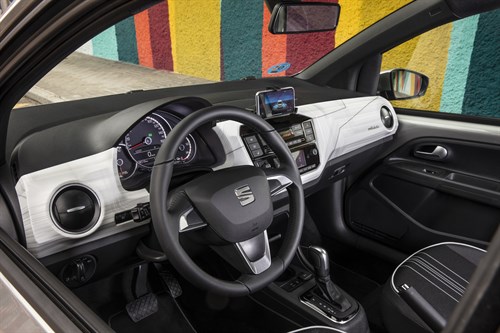 Seat has tried to add some interest with a distinctive injection-moulded dashboard panel, and there is kit such as heated sports seats and a leather steering wheel (only one equipment grade is available), but fundamentally this is the same old Mii, with details such as exposed metal on the insides of the doors making plain its budget car roots, as does the now-ubiquitous infotainment touchscreen being absent, replaced here by a cradle on top of the dash in which drivers are invited to place their smartphones.

We are used to electric cars being all about the new, and so it feels a bit strange to be driving one with old-school analogue instruments, and that even has a traditional key inserted into the steering column rather than a push-button arrangement. Combined with the as-you-were exterior styling, it means anyone looking to wow passengers with some kind of smaller, budget Tesla alternative will be disappointed.

Thing is though, the crucial word in that sentence is budget, because that is the Seat's trump card. At a cost of less than £23,000 - and that is before applying the government's £3,500 plug-in car grant - it is just about the cheapest mainstream EV you can buy, aside from the Smart EQ Forfour with its range of only 70 miles. By way of comparison, the newly facelifted Renault Zoe - another small city-focused EV - is around £6,000 more, although that does at least offer a greater driving range than the Mii. What Seat is therefore offering here is an approach to electric motoring that, while decently equipped (rear parking sensors and cruise control are among the other standard kit), foregoes up-to-the-minute design in favour of affordability. And for fleets with an eye on both the balance sheet and the increasing need for corporate sustainability - and with drivers aware of the 0% BIK tax on EVs from April 2020 - it could well be a compromise that is worth making. 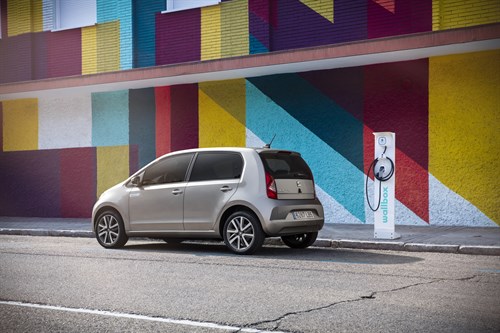 As demand and production increases the cost of buying a new EV will come down, but for now the high purchase price compared with petrol and diesel cars is still a significant deterrent to their wider adoption. By offering electrification for less than £20,000, the Mii Electric, while not without flaws, could be the right car for right now. In fact, the greatest challenge facing it could be its platform-sharing sister cars the Volkswagen Up and Skoda Citigo, both of which have electric versions with the same powertrain on the way.