Ssangyong now offers a petrol alternative in the Korando range, with a new turbocharged motor.

The very first test car I borrowed for appraisal from a car manufacturer was a Ssangyong Korando. I reported on it in the pages of the Stamford Mercury, and pondered whether this rugged-looking three-door model, with plenty of kit but little refinement, would have any staying power with consumers.

Since then the brand has undergone a number of relaunches, but its latest status, under Indian automotive giant Mahindra and Mahindra, seems more secure, and the latest models are displaying the results of significant investment.

We drove the diesel version of the latest Korando last summer and the brand recently added petrol versions to the range. The new engine is a turbocharged 1.5-litre motor with four cylinders, and with 163hp goes up against petrol versions of the Nissan Qashqai and Ford Kuga.

Like the model I tested more than 20 years ago, later versions of the Korando had tended to be favoured by those who needed a vehicle that wasn't afraid of hard work off-road. The current model steps back from that a little, and only diesels are offered with
four-wheel drive.

Our petrol test car underwent a long pre-Christmas journey from the East Midlands across the channel to France. The Ultimate equipment grade leaves nothing on the options list and the interior has a number of items that elevate it above other variants in the range. 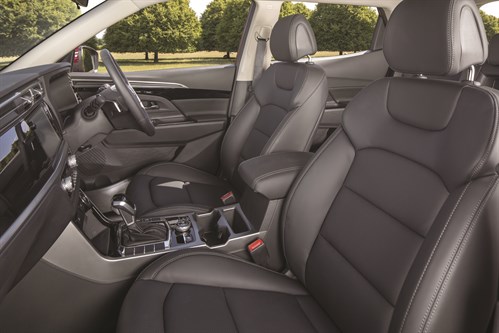 The infinity effect of the red LED lights in the dashboard and door trim is probably the most eye-catching, but the digital instrument display, which can be configured to different appearances, also helps.

The TomTom navigation system isn't the most intuitive touchscreen system, but it does include helpful things such as a reminder of the car's true average speed when in an average speed camera checking zone.

Although we don't expect many Korando drivers to be seeking off-road routes, the steering seems to be geared somewhat for navigating ruts and narrow tracks, with a little too much turn-in needed to feel truly agile in urban environments.

The engine itself is smooth and refined, and was definitely a decent unit to cover the near 1,000-mile distance clocked up in a few days.

Its pricing, undercutting equivalent versions of well-established rivals by several thousand pounds in some cases, helps negate its less favourable BIK tax situation. However, it is only a touch higher per month than a top-spec Nissan Qashqai, despite having CO2 emissions of 30g/km greater than the Nissan.

In fact, for a small business that could establish a strong relationship with a local dealer capable of offering support for SMEs, the Korando isn't a bad choice, even if it doesn't have the recognition of sector stalwarts such as the Kuga and Qashqai.