A small, lightweight premium car that was ahead of its time. 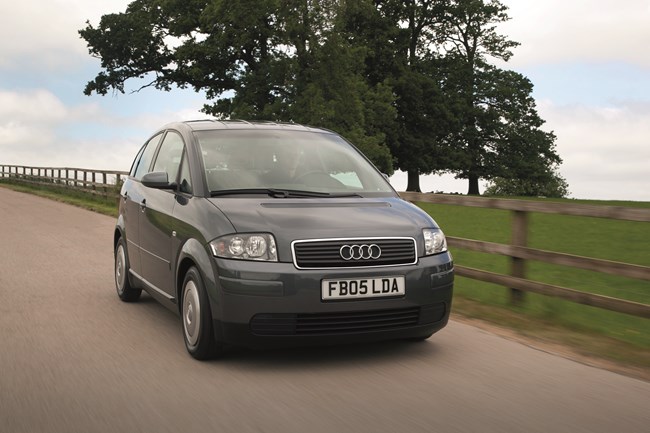 We hear a lot about small cars bringing only small margins for both car manufacturers
and dealers.

Small car platforms have had to become more versatile, spawning a number of different body styles, some of which are a little more profitable, but also deliver economies of scale.

In the 1990s, this practice was not widespread. Mercedes-Benz had launched the new A-Class, its smallest model designed in the then popular MPV silhouette. BMW didn't follow suit, although Audi did.

The A-Class used a revolutionary design, with a so-called 'sandwich floor' that could help keep the engine mass from introducing into the cabin in a front-end crash.

The Audi A2, launched in 1999, was revolutionary in a different way. It used aluminium construction, like the A8 luxury saloon, and had its own dedicated production line.

It tipped the scales at 820kg, but could accommodate four adults comfortably. Compromises for its super-aerodynamic shape included a split rear screen, bisected by a spoiler, but it was one of the most fuel efficient cars on sale at the time, with the 1.4 TDI capable of 62.8mpg on the old NEDC combined cycle, with CO2 emissions of 119g/km.

There was an even more fuel-efficient version available in some markets, but it was never produced in right-hand drive and was not officially imported by Audi UK.

This 1.2 TDI had narrower tyres with aerodynamic wheel trims and other tweaks to make the shape even more slippery.

It also came with a long-legged five-speed manual transmission with an electronic clutch allowing auto shifts. It meant software could decide the optimum shift points for fuel efficiency. Audi UK has since imported an example, which resides on its heritage fleet - the fuel-saving technology on that version was unusual at the time but exceptionally common now.

It included, for example, an automatic stop function when idling.

It was capable of around 95mpg on the NEDC combined cycle, which was better than almost any other car available at the time. A Volkswagen Lupo used the same engine and technology to achieve similar results, while the only other production car in touch was the Honda Insight, which also had clever aerodynamics, but deployed mild hybrid technology to assist its 1.0-litre petrol engine.

Production of the A2 stopped in 2005. It was an expensive car for Audi to produce and pricing it competitively was incompatible with it being profitable.

Since then, there have been rumours of a revival of the A2. In 2011 a concept car was shown with a similar shape to the original but with fully electric power. The A2 also served as a test bed for Audi to develop hydrogen technology, but that is so costly that most manufacturers end up collaborating to
share costs.

Will there be another A2? We don't know. But if there is, it is unlikely to be as revolutionary as the original.