Citroën's Saxo - and its Peugeot counterpart - revitalised the appeal of small cars in the 1990s. 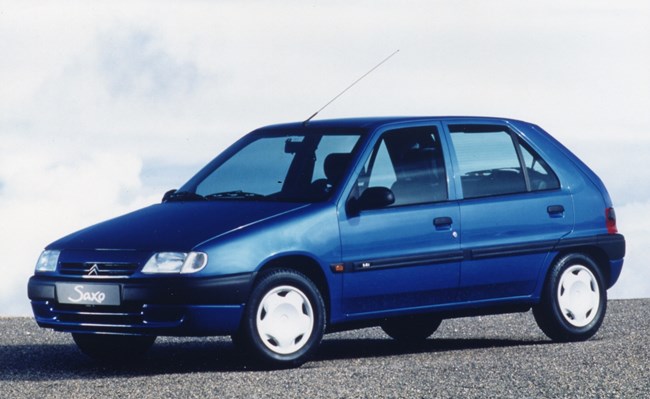 Small cars often have a reputation for being mundane, but it was rarely true of those produced by French manufacturers.

From the Renault 5 and Clio to the Peugeot 205 and 206, many will have wondered why most rivals looked a tad drab by comparison.

It was almost as if people buying cars in this price-sensitive sector had low expectations, and felt they deserved something lacking in character and sophistication.

The Peugeot 205, produced from 1983 and continued in production in some form until 1998, was a huge success, and we'll revisit that on another occasion.

Citroën's smallest car by the late 1980s was the AX, and this was at a time when platform sharing between the two brands was still more ambition than reality.

The first collaboration came with the Citroën XM in the late 1980s, and then the Citroën Saxo and Peugeot 106 followed in 1996.

Developed from the Citroën AX, the Saxo was sturdier-looking and feeling than its predecessor, but still had deft driving behaviour and a cheeky appearance. With only the front end and rear lights to distinguish it from the Peugeot counterpart from outside, the interior and driving experience were also similar.

Whichever variant you chose - whether an entry-level model that might have served as a pool car for a business, or bodyshop courtesy car, or the upper-end VTR and VTS beloved of the modification and tuning community when they became used cars - they were fun to drivein some way.

While the lowly 1.1-litre and later 1.0-litre didn't offer much in the way of straight-line performance, they were great fun on more challenging roads, with responsive steering and engaging handling.

Entry-level models did without power steering, but it wasn't a feature you missed as the car was relatively light.

In spite of this, Citroën made a great deal about the car's crash performance in its marketing at the time. Although the launch of the car was ahead of formalised independent crash testing from Euro NCAP, and when it was eventually tested it didn't come through with flying colours, it was almost as good as small cars were in the late 1990s.

Most of my miles in the Saxo were driven in the entry-level 1.1i X, which had little in terms of luxury. It didn't even have a rev counter - in its place was an enormous analogue clock. It also came with a push-button immobiliser below the dashboard, where the driver had to enter a four-digit code to start the car with the key in the ignition.

The Saxo lived on to the new millennium until Citroën's small car split into the C2 (sporty three-door) and C3 (five-door and spacious), but they didn't quite garner the following of their predecessors.