Citroën's big executive car was an oddball choice, but its legacy is about to live on in the C5 X. 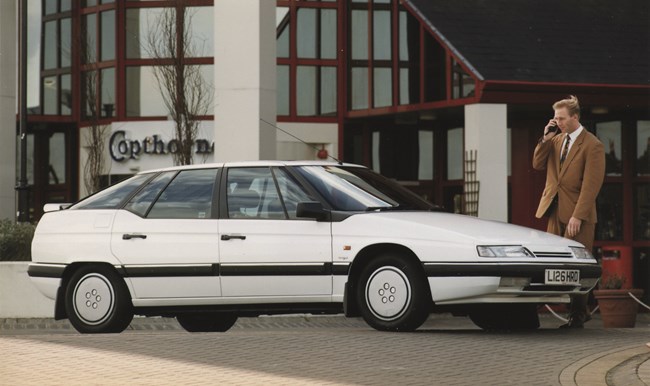 Citroën has a long history of avant-garde large cars, starting with the DS in 1955, which must have looked like a spaceship alongside the more traditional contemporary Austin Westminster and Vauxhall Cresta. That lineage continued through the CX and, in 1989, the XM.

Sharing its platform with the elegant-yet-conventional Peugeot 605, the XM certainly had enough traditional Citroën quirks about it.

The XM was launched as a hatchback - unusual in an executive car sector mainly populated by saloons, although the French have form for this (see also the Renault 25, Safrane and Vel Satis). Most rivals were saloons, although Ford had dabbled with the Granada and Rover hedged its bets with the 800 following the demise of the SD1, eventually launching a Fastback hatch alongside the saloon.

Among its rivals were the straightlaced Audi 100, BMW 5 Series and Mercedes-Benz W124 E range, so the XM hatchback, with its odd single-spoke steering wheel and electronically controlled, hydropneumatic, self-levelling suspension, was much more about comfort than driving dynamics.

And despite its rear hatch, Citroën introduced a secondary window to shield rear-seat occupants from the elements should access to the luggage compartment be required.

It also had a partly zinc-coated body shell, which gave some short-term reassurance against rust, although the method of the protection was not perfect, as used-car buyers later found.

The estate, launched in 1991, offered vast load space for those who needed it.

The range started at a little under £14,000 when the car arrived in the UK, late in 1989, for a carburettor-fed 2.0-litre engine. A premium of around £700 would buy a more efficient fuel-injected 2.0i. At the top of the range was a 3.0-litre V6 - the first six-cylinder Citroën since the Maserati-engined SM - and later a couple of diesel engines were also offered.

A couple of years ago I was able to drive a 2.0-litre petrol XM around some of the roads around Millbrook proving ground, where its ride impressed significantly more than its handling. A facelift in the mid-1990s put an end to the single-spoke steering wheel because of the expectation of a driver's airbag in a car of this stature.

But it was supremely smooth and comfortable, and its spacious interior was cosseting with its velour-trimmed upholstery. It was so different from German, British and Italian alternatives, and enough for some people to really want it.

Citroën no longer has an executive car, and after the XM ceased production in 2000, there was a pause before the Citroën C6 was introduced - which sold even fewer. But perhaps the forthcoming C5 X is its spiritual successor, promising greater comfort, individualism and a touch of panache that rivals won't have.