Fiat shocked the automotive world in 1998 when it launched the Multipla. Well, just look at it! 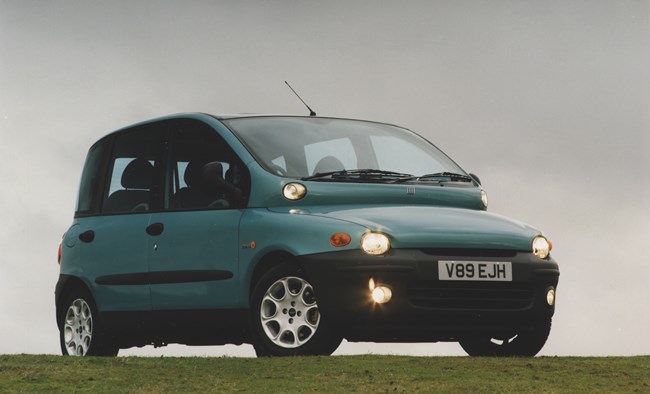 In the 1980s, a handful of car manufacturers stumbled upon a concept that slowly began to capture the imagination of drivers with families.

There's debate about whether Chrysler, Mitsubishi or Renault 'invented' the multi-purpose vehicle (MPV), using a car platform rather than putting windows and seats in a van.

In Europe, it was popularised by Renault and the Espace, followed by the slightly longer Grand Espace. Other manufacturers were quick to follow, but a decade later they were also trying to apply the same principles to the lower-medium sector.

We had the Renault Megane Scenic (later, just Renault Scenic) and the Citroën Xsara Picasso (later Citroën Picasso). Into the new millennium there was also the Ford Focus C-Max.

There was a definite pattern of adapting an existing car platform to maximise the space within it and market it as the future of family cars.

They all followed a similar format and there was innovation with most new introductions. For example, following the launch of the five-seat Megane Scenic in 1996, Vauxhall introduced the seven-seat Zafira in 1999. Its third-row bench seat folded flat when not in use.

But the folk at Fiat seemed to be on a very different mission to achieve the same aims.

The Multipla, launched in 1998 in Europe and a year or so later in the UK, looked like one of the weirdest concept cars ever conceived. But it made it into production.

Sharing its name with a compact six-seater Fiat of the 1950s, the new Multipla also had six seats with three individual seats in the first and second rows. The middle seat in the front was set back a few centimetres so the driver could comfortably reach the gear lever, but its appearance was utterly outlandish.

The headlights were set low, just above the front bumper, the bonnet was relatively flat, while the main beam lamps were at the base of the windscreen. If front foglights were also fitted, there was a definite three-tier effect.

The dashboard was just as peculiar, with no instruments directly in front of the driver, instead located in a central binnacle. The collection of vents, I remember reading from one automotive writer at the time, "looked like a demented nun".

I attended the UK media launch of the Multipla, which was offered with a 1.6-litre petrol engine producing 100hp and a 105hp 1.9-litre diesel, later enhanced to 110hp.

It was actually better to drive than most cars of its type because, despite its height, it was wide and had a fairly low centre of gravity. The middle seat in the front row could be folded down as a table and each of the three individual rear seats could be removed. But even with them in place, there was a huge amount of space and it was extremely usable because of the vertical sides.

It looked strange from the rear too, but most models in the UK were equipped with a sticker in the rear window that read: "Just wait until you see the front!"

Sadly, too many buyers were put off by the looks and the Multipla remained a niche car in a sector that was actually responsible for a great deal of volume for Renault, Vauxhall and others.

The looks were toned down in a facelift in 2003, but it didn't do a great deal to help sales and there is no real modern equivalent. But the automotive world is much richer for the Multipla having existed.