A model that changed perceptions of the Korean Kia brand, launched just three-years ago. 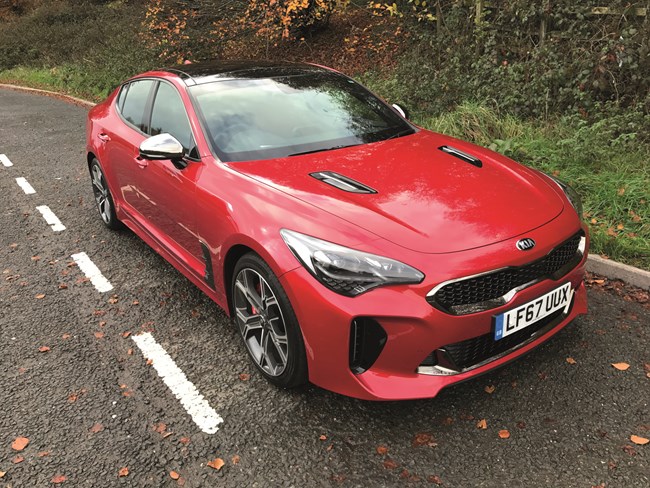 Rear-wheel drive, a twin-turbo V6 petrol engine and a 0--62mph acceleration time of under 5.0 seconds; these ingredients would be expected of Italian exotica in the early noughties - not a Korean Gran Tourer.

The Stinger was launched in the UK in 2018, with more fleet-friendly versions - a 244hp, 2.0-litre turbo petrol and a 197hp 2.2-litre diesel. All Stinger models were mated with an eight-speed automatic transmission - but all eyes were on the 365hp GT-S.

Kia's new flagship drove well, too. This was because it was one of the first cars to be engineered by former vice-president of BMW's high performance M division, Albert Biermann. The result, whether you went for the entry-level petrol or range-topping twin-turbo, was a car that felt both nimble and agile, with a decent ride and excellent grip. So to sum up, the Stinger was great fun to drive, with dynamic capabilities not seen from a Kia model before.

Outside the styling is best described as exotic, especially when compared with the rest of the Kia range at the time. At the front there is the family 'Tiger Grille', but it's flanked by a pair of curvy headlights and some aggressive air intakes. The muscular look carries on at the back, with the wide haunches and a swooping roofline.

Inside, the Stinger's design is equally attractive, well finished and as you'd expect of a Kia - filled to the brim with standard kit. The only demerit being the quality of materials don't quite match European rivals. This Kia might be sporty, but it's still a large car at 4,712mm long, so there's plenty of front and rear space and a usable 406-litre boot.

Never had a Kia locked horns with rivals such as the Audi A5 Sportback or the BMW 4 Series Grand Coupe, but the Stinger had the kit, stylish looks, and dynamics to upset these established premium German rivals.

Sadly, emissions and sales slowing killed off the entry-level petrol and diesel models. But we're pleased the 365hp GT-S carries on in 2021, for user chooser buyers that want a less obvious alternative to the German popular mainstream. The Kia range-topper has also received the mildest of facelifts this year, in the form a new design of alloy wheel, revised LED rear lights, availability of electric blue on the colour chart, a new 10.25in touchscreen and a 64-colour ambient light system for the interior.

Rumours are that sadly the Stinger will be discontinued in early 2022, with its place as the halo model of the Kia range now taken by the excellent EV6. As we move towards an electric future for cars, having an EV range-topper seems far more relevant than one with a big petrol engine. However, in our opinion, the Stinger has done what it needed to do and raised Kia's profile. After all, no one would now question choosing an EV6 or its prices, which start from £40,945 - the Stinger has done its job and remains a fine car.