Saab's executive car might have been trying to compete using old Opel underpinnings, but it delivered at least one world first in 1997. 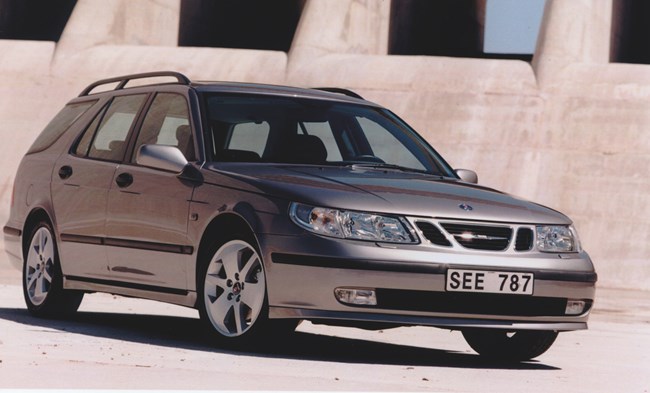 Saab's car business owes much to the company's development of aircraft, but before its demise in 2011, it seemed to suffer from chronic mismanagement.

The company began as Svenska Aeroplan Aktiebolaget (Saab) in 1937, providing aircraft for the Swedish air force, but after the war it turned its attention to road vehicles.

Its cars were said to be influenced by aircraft aerodynamics to improve fuel efficiency and many were design classics.

When a 20-year merger with Scania-Vabis came to an end in 1989, US car giant General Motors (GM) took a 50% stake in and management of Saab Automobile.

Part of the story is perhaps to do with how the large automotive manufacturers are watching each other's moves and keen not to let the other gain an advantage. Coincidentally, the year GM bought its stake in Saab, Ford purchased Volvo Cars outright.

Both would realise 20 years later that their own businesses' best interests lay with a less expansive vision.

The first Saabs under GM control were based on European Opel and Vauxhall models. The 900 that was launched in 1994 (later known as the 9-3), used the same platform as the 1988 Vauxhall Cavalier and Opel Vectra.

The 1997 9-5, a replacement for the 9000 executive car, was derived from the same platform as the 1995 Vauxhall Vectra. Yes, the one that infamously appeared on Top Gear when the presenter lacked the inspiration to give it a fair review.

The Saab 9-5 had a great deal of innovation, however. It was the first car on sale to offer ventilated seats, around nine months before the appeared on a Mercedes-Benz S-Class. A relatively common option today on high-end models, it keeps occupants cool with perforated leather in contact with the posterior and blows through the holes via the air conditioning system.

Safety was also a big deal for Saab and its head restraint design, which could move forward to reduce the risk of neck injury in a crash, was smart and useful. Other GM vehicles soon adopted it.

The aviation theme never really left Saab's car division, even though the company had been separate for many years.

The dashboard and instruments in the 9-5 were very much cockpit-inspired, with controls angled towards the driver.

There was also a 'night panel' button for driving in the dark. It would switch off all instrument illumination except for the speedometer, helping reduce glare and fatigue. Emergency warning lights would still illuminate if there was a serious problem such as engine fault or low fuel.

As well as the saloon version, there was also an estate, which had serious load carrying ability.

Saab had also promoted the virtues of downsized engines with turbocharging to improve fuel efficiency over larger engines.

The 9-5 was available with a six-cylinder version, as were many of its rivals in the executive car sector. But the high-performance Aero used a four-cylinder 2.3-litre engine to achieve a then remarkable 230hp, and later as much as 260hp.

Saab used to include in its promotional material that the fifth-gear acceleration time from 50-70mph was quicker than in a Lamborghini Diablo.

Another marketing gimmick - which seems to chime with the GM-led promotion - was that a greater proportion of Saab's buyers had degrees than those of premium-badge rivals. We're not sure if this would have been so heavily promoted had the Swedish been left in charge, but it's the kind of one-upmanship US advertisers seem to love.

I attended the UK media launch of the 9-5 Aero in 1998, and found it easy to get lured in by the appeal of the brand.

There were other idiosyncrasies I hadn't previously known about. For manual versions, the gearstick had to be in reverse gear when the car was switched off to allow the key to be removed from the ignition.

The multi-layered grid design for the vents was also part of the brand, and the dashboard-mounted cupholder underwent some serious acrobatics as it moved into position after pressing the release position.

The Aero, with 230hp then, was savagely fast when shifting down to accelerate. But its design was absent of some of the bling that was becoming increasingly common on other premium models, and all the better for it.

So why didn't it work? Well it did up to a point. However, there was a lack of investment by GM as a result of Saab struggling to make money.

The Saab 9-5 soldiered on, benefitting from minor revisions in 2002, and the introduction of a diesel engine. Sadly, as GM was a bit behind the times with diesel, the 2.2-litre engine offered so late in its life was a 125hp motor, also found in the Vauxhall Omega and Vectra, and did not benefit from the kind of technology that European rivals were offering to help with fuel efficiency and refinement.

And the addition of a V6 diesel, to try to appeal to company directors looking for a bit more performance combined with fuel savings, didn't really hit the mark.

The Isuzu-sourced engine was not as refined as what BMW and Audi were offering, and there wasn't the budget to re-engineer the car so that it could also be chosen with an automatic transmission. It was manual-only for the V6 diesel, although a new Fiat-sourced 1.9-litre diesel, also available with automatic, that arrived with a heavy facelift in 2005 was more up to the job.

It seems remarkable now that a premium car expected to take customers from German premium brands, as well as Jaguar, Lexus, and not forgetting fellow Swedish brand Volvo, would have to soldier on for 14 years before being replaced.

Fortunately, the 9-5 was put out of its misery in 2009, with a completely new model, sharing architecture with the 2009 Vauxhall Insignia, was launched.

The saloon made an appearance first, while a handsome estate was also due in 2011. Sadly, sales of the estate version didn't formally commence, as GM tried to stem its losses and the company went out of business in 2011.

Ford had sold Volvo Cars to Chinese automotive giant Geely a year earlier, so despite a vague parallel, for Saab it became a tale of what might have been.