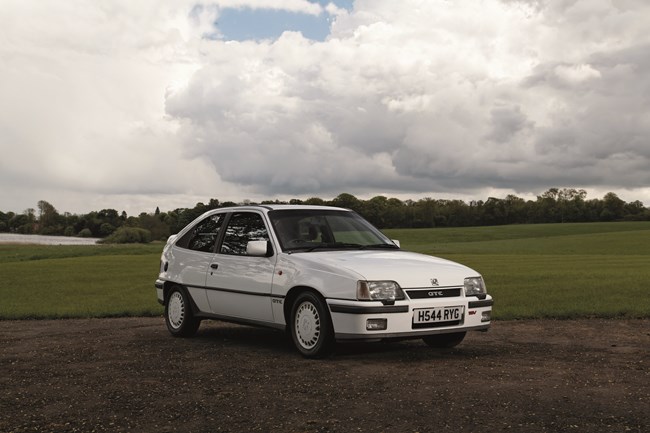 There is a new Vauxhall Astra due very soon - the eighth generation of the small family legend. This car is the first to be built on new owner Stellantis' EMP2 platform, the same as the third-generation Peugeot 308, which is also due this year. Because this Astra is built on this platform, for the first time in the model's 43-year history, it will be offered as a plug-in hybrid model.

This isn't the first time the Astra range has been shaken up, so we thought now was a good time to look back at the second-generation Astra, which when launched at the end of 1984, mixed up the fleet and small-family hatch market in much the same way as the Ford Sierra did after the much-loved Cortina, when it was launched back in 1982.

Why? Well just look at it for starters. The curvy hatchback suddenly made its closest rival, the Ford Escort, look very dated with its exceptionally low drag coefficient of just 0.32. Yet, the Ford was always the better seller. Although, the running gear was largely unchanged from the first-generation car. The Astra's restyled body, plus decent refinement and comfort was enough for the three and five-door hatchback and estates to walk away with the prestigious Car of The Year award in 1985.

That comfort and refinement was enough to take customers' minds away from the fact that even the sportiest GTE, was pretty average to drive. Saloon Belmont and Convertibles arrived in following years.

It is the fastest GTE that we were lucky enough to drive, in fact it's the rather peachy example from Vauxhall's own Heritage Fleet. Thankfully not fitted with the very mediocre 115hp, 1.8-litre eight-valve at launch, or the better the 2.0-litre, 124hp engine that replaced it soon after. No, the GTE we got to drive is the car it should have been from launch, as it has the legendary 2.0-litre XE engine or 'Red Top' to Vauxhall fans.

Thankfully, Vauxhall didn't just add this engine, they fitted shorter springs, a wider rear track, a thicker anti-roll bar, with another added at the rear, which all went together to transform the Astra GTE from also-ran to serious hot hatch contender.

Inside it's very '80s Vauxhall,' with grey velour sports seats and the tall dash. GTE 16v highlights include the three-spoke steering wheel and the amusingly hard to read digital instruments. Despite all the power, the XE engine doesn't sound much different to the naturally aspirated engine first tried in a Cavalier of the same age - but with a deeper exhaust note. The instant throttle response impresses - it's all too easy to break traction and wheelspin your way through the first four gears. Then there's the impressive low-down torque, meaning gear changes from the slick five-speed manual transmission are less.

With the Peugeot Sport Equipped 508, sister brand Peugeot have proved performance cars can also be frugal - at a price. It makes us wonder what further tricks Vauxhall has up its sleeve for the next Astra VXR.