Lots of new cars today have an E in their name for electrification, but don't be fooled - the model on this page wasn't decades ahead of the game with battery power. Instead, the initial in the Carina E's name is for Excellence in Europe, and reflects Toyota's pitch at the time that this was its first model designed and developed specifically for this continent. Significantly, it was also the first Toyota to be built in the UK, at the firm's then-new manufacturing plant at Burnaston, Derbyshire. But did the Carina E offer more than patriotism to win drivers over?

Well, with the entry-level Xi equipment grade we drove, that might have depended on the weather. Unfortunately, our drive took place on one of the hottest days yet in 2020, and with it came a stark reminder of in-car comfort features that today we take for granted. As it was, the (commonplace at the time) lack of air con had us winding down the (manual all-round) windows, and sympathising greatly with those who would have driven it in business suits back in the day, though at least our car came with a sunroof we could also pop open. Something else different in the 1990s was the placement of indicator stalks not being standardised, meaning we kept turning on the windscreen wipers by mistake when approaching junctions.

Positives? Well, the Carina E is comfortable, and indicators aside it's easy to drive, with good visibility, light steering and a compliant gearshift, though there's no hint of sportiness to match the rather incongruous rear spoiler. The styling is otherwise reasonable enough, if unexciting, but if it's innovation you were after you'd need to look under the bonnet. The Carina E has a 'lean burn' engine, a concept reasonably popular with Japanese manufacturers at the time. Based on a combustion pressure sensor that allowed the fuel-to-air ratio in the engine to be closely regulated, Toyota claimed at launch that it could achieve a 10% improvement in fuel economy compared with regular engines, as well as a reduction in NOx emissions. It's not noticeable from behind the wheel, but might have had a hand in the Carina E's impressive official fuel economy figure (though unrepresentative testing was probably chiefly responsible).

Although lean burn engines didn't really catch on, that didn't stop Toyota innovating with its powertrains. Instead, it continued to focus on efficiency and low emissions by putting itself at the forefront of hybrid technology, which now powers most of its range, including today's Corolla saloon. This is a car that also shares the Carina E's Britishness, being built at the very same Burnaston factory. And it also clearly demonstrates how much cars have grown over the years - despite the Corolla being a lower-medium car, placed below the Carina E in Toyota's range at the time, the modern version is bigger all-round than the 1990s upper-medium saloon. 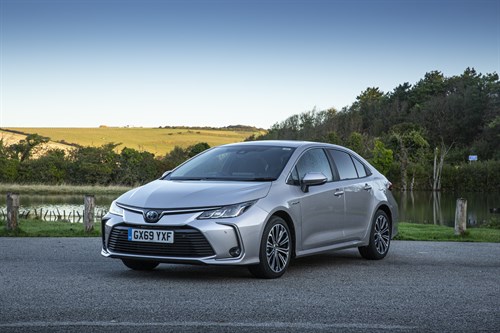