When Volkswagen offered a hatchback version of the Passat, it combined practicality with style and status.

In the Volkswagen timeline, the Passat appears even earlier than the iconic Golf. Loved by high-mileage sales reps and junior management, this D-sector contender has always had an elevated status among mainstream family cars.

The second-generation Passat (B2) was produced for the European market from 1981-1988. The GL5 hatchback was in production from 1985-1988, having been introduced with the facelift midway through the lifecycle.

Before that, customers had a choice of saloon or estate, but during the 1980s, British car buyers were in love with the hatchback.

The Vauxhall Cavalier offered a five-door hatchback with its second-generation model, and the Ford Sierra, launched a year later in 1982, started as a hatchback (a saloon came later), as did the Citroën BX.

In those days, saloons had fixed rear bench seats that didn't fold down to increase luggage capacity if a one-off bulky item needed to be transported. For that, you needed an estate car for maximum flexibility, but they weren't so stylish.

A family hatchback offered the best of both worlds - the elegance of a saloon with the folding seats of an estate. Volkswagen believed it needed to go in this direction with the Passat, and the GL5 was certainly a strong contender.

Sharing a platform with the Audi 80, the Passat also offered a longitudinally mounted engine, but with front-wheel drive (or four-wheel drive), a configuration that was revisited later with the fifth-generation Passat and Audi A4.

The version we tried is a 1985 example, owned by Volkswagen UK, and comes with a five-cylinder 2.0-litre motor, giving it a rather more cultured engine note than a typical family hatchback - and many of its rivals.

Power steering was standard across the Passat range at this time, and the car doesn't feel so far removed from modern motoring, although the slimmer window pillars offer much greater visibility. The biggest advance is probably the brakes, with greater planning needed to haul this family car (weighing about as much as the latest Polo) to a stop.

Our car is also equipped with electric windows and central locking, as well as upmarket velour upholstery. As it is a hatchback, we have chosen a version of Volkswagen's Arteon fastback as a comparison, illustrating how much expectations have grown in terms of space, equipment and performance in the last 35 years.

However, anyone given a Passat GL5 as their company car in the 1980s would have been pretty happy with their employer, and the envy of their Cavalier and Sierra-driving rivals. 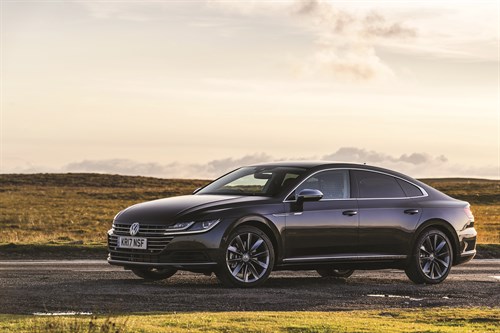