Our A3's touchscreen-based infotainment isn't the ergonomic handicap we might have feared.

When I heard that Audi had ditched the rotary control from the new A3's infotainment system and had gone touchscreen-only I expected to dislike it. I'm far from alone in thinking that many manufacturers, in making as many functions touchscreen-based as possible, have gone too far, forcing drivers to awkwardly point at a screen and therefore take their eyes off the road while driving, rather than using a more intuitive physical control. Indeed, my two favourite test car infotainment systems during my time at Business Car, fitted to the Mini Hatch and Mazda3, both feature a rotary control set-up.

However, I've found the A3's system to be much easier to use than I expected. Chiefly, I think this is because my usual reason for operating a screen on the move is to switch between the satnav map and the audio system controls, but with Audi's superb Virtual Cockpit display I can have the (Google Earth) satellite map in the instrument cluster the whole time, leaving the central screen free for the stereo (or if you prefer you can switch between the functions on the Virtual Cockpit screen with the steering wheel controls). 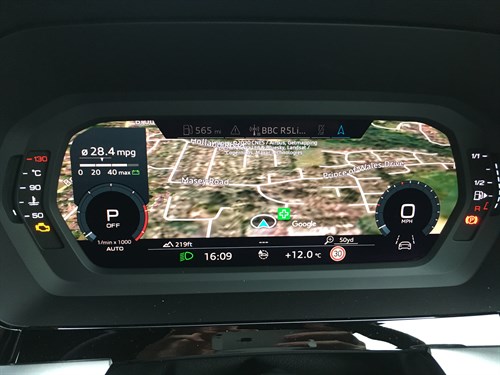 In addition, Audi has, at least with the A3, avoided the pitfall of putting ventilation system controls on the screen, meaning that these can be adjusted with good-old physical buttons. There's also the option to use voice control, but personally I find this too much of a faff to use most of the time given how much confirmation it needs for commands, though it could be useful if you need to reroute the satnav while driving.

One area where the A3's infotainment system does fall down is volume control. The knob on the centre console looks like a traditional, twist-able affair, but in fact it's touch-controlled, requiring you to awkwardly swipe your finger in a circular motion to adjust. It feels like the designers being too clever for their own good, but fortunately it'll only be an irritant for passengers since the driver can simply use the steering wheel-mounted controls instead. 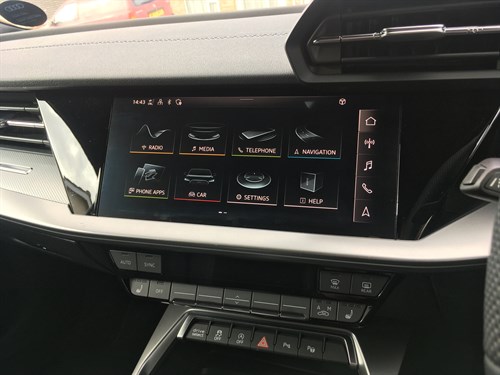 A feature that takes a far more straightforward approach is the warning system that tells you if your phone is still plugged in when you leave the vehicle - in the form of a literal voice announcement. Some may find that annoying, but personally I appreciate it, given how often, with the modern-day convention of relying on phones for in-car entertainment, I've walked several minutes away from the vehicle only to realise that my mobile is still ensconced on the centre console. If you do find it annoying, there's an option to switch it off.

As for the rest of the interior, it's a thumbs up from me. When the A3 launched, some reviews complained of sub-par plastics being fitted, but you have to pay close attention to notice them, and a far bigger impression is made by the consistently high quality of the fit and finish, with a satisfyingly substantial click to all the switches. The steering wheel is good too - reassuringly chunky without being cumbersome.

1st report: Audi you do?

That might make it seem like the diesel Audi A3, which has just joined our fleet, is on a hiding to nothing - particularly when you consider the last diesel car I ran in this segment, the Mazda3, was actually discontinued by its manufacturer during the test period due to a lack of demand. And the A3's engine doesn't even have a fuel-saving mild-hybrid system of the sort that has cropped up lately with other diesel Audis.

But the A3 does have two things in its favour. Firstly, that despite the bad publicity around the fuel, we at Business Car still think that with its good fuel economy and CO2 emissions diesel remains the right choice for many fleet applications. And secondly, as for many people, my own personal work journey profile this year has been greatly amended. Before, a large chunk of my mileage in long-term test cars was spent on rush hour commutes to the office, but like millions of others this has now disappeared, with homeworking becoming the norm. What's left therefore is the long-distance trips - three-hour slogs up the motorway network to attend the new breed of socially distanced media events. Potentially, it's the ideal proposition for a diesel, so I'm expecting impressive figures from our fuel economy calculations over the coming months.

Engine aside, this is, of course, the latest A3 that arrived on the market earlier this year, in close proximity to its platform-sharing VW Group cousins the Volkswagen Golf, Seat Leon and Skoda Octavia. Unsurprisingly, the Audi is the most expensive of those four, so what I'm looking for are tangible reasons to choose it beyond just having four rings on the front grille. It's in the sporty S Line equipment grade, which certainly helps it to make a good first impression, with bespoke S Line bumpers, a roof spoiler, chrome tailpipes and privacy glass among its cosmetic flourishes. However, I'm also pleased that as a no-cost option the A3's standard suspension has been retained, rather than the lowered sports suspension that is normally included with S Line. OK, cars fitted with that should have sharper handling, but with other Audis I've tried that also means compromised ride comfort, and with the diesel engine making the car feel naturally more suited to cruising than B-road blasting, the regular set-up seems like the right choice. 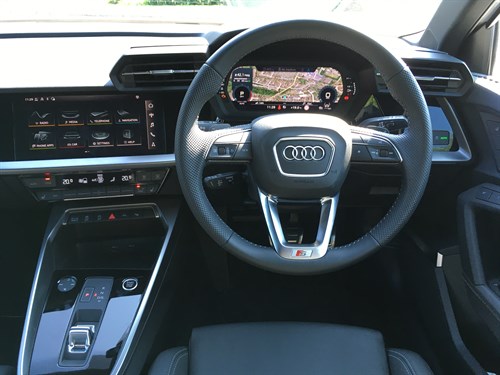 Inside, Audi's Virtual Cockpit display is standard throughout the range, along with a 10.1in infotainment touchscreen. It's a tech showcase, and does look good. But then the interior should be impressive, given the basic price of the car in this spec is more than £31,000, and if anything the extensive list of options fitted reveals some shortcomings in the standard equipment list - making you pay £330 extra for heated front seats, for example, feels a bit stingy. With the options included the price comes to over £37K - a chunky figure indeed for a lower-medium hatch, and one that creates high expectations for the A3 to live up to.