5th Report: Back down to earth

When editor Simon Harris suggested I take over the Audi A4 35TSI for the remainder of its tenure on the Business Car fleet, I have to admit, I felt pretty stoked.

I have driven more than my fair share of chubby-club motors over the last few years, and as much as I appreciate the commanding driving position and the ability to float over our dilapidated road surfaces with minimal impact on my aging bones, I have never been a fan of the dynamic tardiness associated with SUVs.

Consequently, the opportunity to move my derriere closer to terra firma, and pilot something that goes where I point it and responds to my right foot without pausing for breath... well, be still my beating heart. 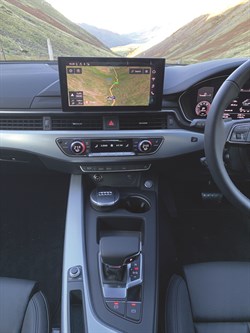 Climbing aboard for the first time and setting up my preferred driving position couldn't have been simpler, thanks to the A4's vast range of seat and steering wheel adjustments - although, like every German exec, the A4 is blighted by a protruding transmission tunnel, which has a certain fondness for my left kneecap.

This may seem like a bit of an anomaly, given our A4 is a front-wheel drive model, but because the A4's engine is laid out North-to-South rather than the more typical transverse arrangement favoured by most front axle-driven cars, a large transmission tunnel is required to accommodate the gearbox housing.

Speaking of drivelines, I can't begin to stress just how smooth and quiet the A4's 2.0-litre engine is. With barely a murmur when idling, and delivering creamy, linear power when revved, it is an absolute pearler. Despite its relatively modest 150hp, it whisks the A4 along at a healthy lick, thanks in no small part to its progressive turbocharged torque delivery.

Unfortunately, this ultra-refinement contrasts somewhat starkly with the amount of road noise that filters into the A4's cabin as well as the jolting abruptness of the stop-start function, which shakes the car quite abruptly as it fires the engine back to life post emissions-saving pause.

Overall though, my early impressions of the A4 are extremely positive and I am certainly looking forward to spending the next few months exploring its attributes in far greater depth.

4th Report: The sound of silence

Since our last report, the A4 has made a visit to Audi hospital, courtesy of the Peterborough retailer.

You might remember I had complained about a repetitive, high-pitched noise from under the bonnet, which was less bothersome for the cabin occupants than for anyone outside the car (the A4's interior is certainly well-insulated!).

Fearful of complaints from neighbours and breaching environmental health regulations for noise, finally a mutually agreeable appointment time was made for the car to be inspected. 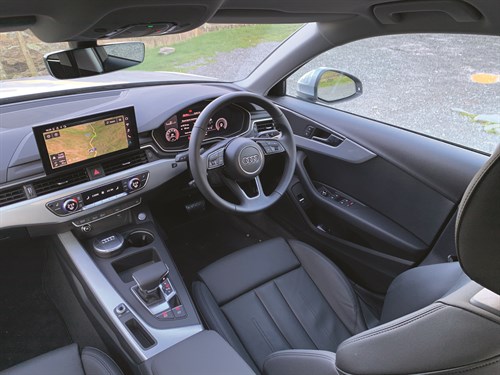 Peterborough Audi's diagnosis was relatively quick, pinpointing the noise to a tight spot on a tensioner for the ribbed belt, and they allowed me to take the car away for a weekend while replacement parts were ordered, and return it to them for the work to be done.

I was given the option of borrowing a courtesy car, but could manage my travel around the problem, so declined.

Both tensioner and belt were replaced under warranty, and since then the A4 has been purring away without incident. Peterborough Audi also had the car valeted both times it was left with them (for diagnosis and later for repair), which all helps with the premium experience. 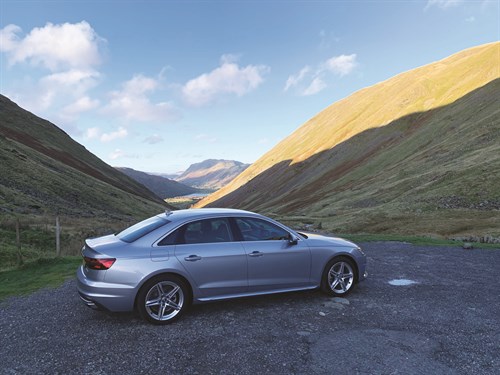 Although I wonder whether the cleansing is done before the work to ensure the pristine workshops (have you seen them these days?) aren't soiled by dirty cars.

The A4 got quickly back into its stride, and once again proved why it is a popular choice as a company car.

Our Sport derivative offers a less intense drive than an S Line on larger wheels and with firmer, lower suspension as standard, but it is a perfect all-rounder, agile enough to enjoy driving it on country roads, spacious enough to carry a family and their weekly shopping, or holiday luggage, and accomplished on those long motorway runs for meetings.

A recent stint in our BMW 320d (my first chance behind the wheel of our 2019 New Company Car of the Year) allowed me to evaluate one of the class benchmark models that the Audi A4 is aiming to beat.

Thinking of the latest versions of all the premium-badge saloons in this sector, perhaps the only one I have missed out on has been the Lexus IS 300h. 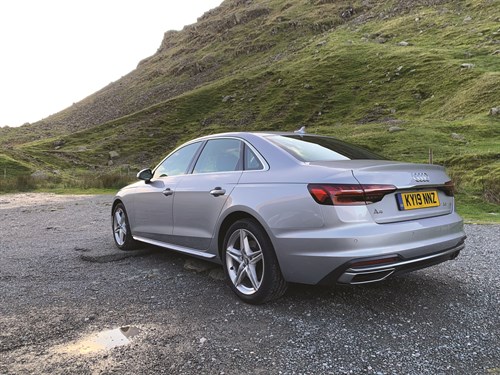 The BMW and Volvo have an advantage in terms of their point in the life cycle, with the opportunity for the manufacturer to change the car from the ground up.

With the Mercedes-Benz, Jaguar and Audi, nothing fundamental changes, although they contain some important updates.

The BMW 3 Series won the premium car category in the recent Business Car Awards, and you, our readers, voted it the overall winner of new cars introduced in 2019.

However, the more time I spend in the Audi A4, the more I feel it is not so far behind, despite being half a life cycle out of sync with the BMW.

Perhaps the 3 Series is more rewarding to drive with its rear-wheel drive balance and more even weight distribution over the front and rear axles, but the front-wheel drive A4 doesn't feel much less enjoyable when tackling a series of bends.

One irritant we reported on last month that hasn't yet been resolved is the persistent squeaking from under the bonnet, which is particularly noticeable when the engine is cold.

Although I had to wait two weeks for a convenient appointment at my local Audi dealer, I ended up cancelling because work got in the way. It is rescheduled and we should have news in the next issue.

The tiniest of problems has arisen with our A4, and it is perhaps testament to the leaps forward in noise suppression technology that I lived with it for a few weeks without the inclination to resolve it.

A high-pitched noise, not dissimilar to a bird chirping, occurs in the engine bay. It is probably more noticeable when cold, and when the engine is warm and at low revs - maybe a steady 65-70mph on the motorway in seventh gear - it disappears.

I have used a number of remedies to make the noise inaudible, including Spotify, Apple Music and the radio, and wouldn't have given it much more thought if a colleague hadn't pointed out how loud the noise was from outside the car. 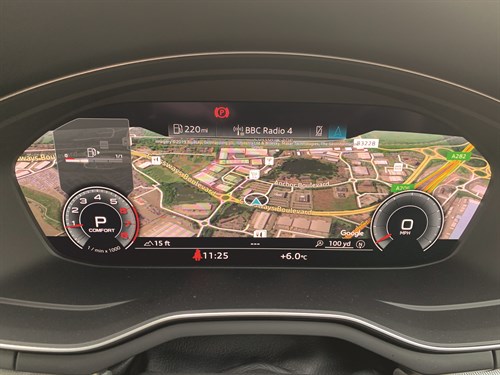 This is where Audi's noise, vibration and harshness experts have excelled, because after parking the car and lifting up the bonnet with the engine running, I agreed it needed attention.

The twittering is coming from one of the moving components in the pulley assembly around the fan belt, so we will book an appointment with an Audi Centre to see if they can rectify the problem, which, despite its volume, would still appear to be extremely minor.

We are getting used to some of the A4's functions - which have been enhanced compared with the pre-update model we ran earlier in the year - including more detailed map imagery in the navigation system, which can, of course, be displayed directly in front of the driver in the instrument binnacle.

Zooming in close gives the impression of being able to spy on activity in the gardens of nearby properties, were it not the case that the pictures were really taken too far away (and some time ago).

Not that the car's presence in the vicinity would have been particularly stealthy given the noise. Next time we update you, we hope to have been enjoying the experience of driving in silence once again.

Yes, this is a new Audi A4 (I am sure many of you would guess by looking), but our test car falls within a narrow window in the production cycle.

It is a 2.0 TFSI in mid-grade Sport specification. A reasonable assumption for a variant suited to a company car driver with an aversion to diesel. 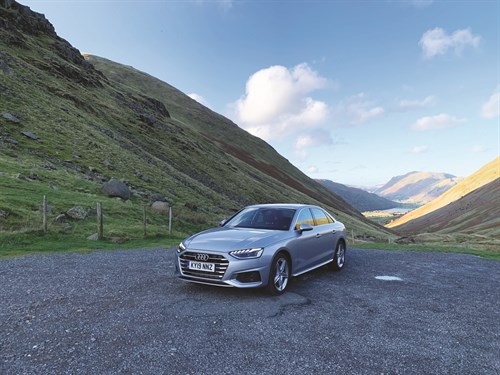 However, it is a 2019 model year car in the recently facelifted iteration, of which there are relatively few. These cars arrived in the UK in August ahead of the 2020 model year introduction just a few weeks later.

While it is ostensibly the same as the model you could take delivery of now, there are some specification quirks that are no longer available in the latest versions.

Its 18in, five-spoke 'star' design alloy wheels are no longer available on UK Sport models, as are the (optional on our car) S-Line high LED lights, and tow bar preparation.

We also have comfort suspension with damping control, which is now only offered on the high-end Vorsprung grade.

The Audi phonebox, with wireless charging, is a £260 option on our car, but for the 2020 model year it is only available as part of the 'comfort and sound pack'.

So there is a lot of detail to wade through to understand why this particular variant isn't quite like the cars available to order now.

One key factor that is particularly important to you and your drivers is that the 2020 model year cars are fitted with low-rolling-resistance tyres, bringing the CO2 emissions figure down from 135g/km on our 35 TFSI Sport S-tronic, to 127g/km.

That brings down the BIK tax band to 29% from 31%, with lower monthly payments for drivers and lower national insurance contributions for employers.

So we will treat this A4 as if we were driving a 2020 model year car. The 35 TFSI badge on the boot refers to its position in the range rather than any specific engine size or power output.

There are some changes to the interior, including the addition of Audi's Virtual Cockpit configurable instrument display as standard across the range.

Previously it would have been an option on some models costing the thick end of £500. Plus, the rotary controller from the centre console found in previous versions, which selected functions on the dashboard screen, is gone.

In its place is a small storage cubby, while the dashboard screen (now called Audi Touchscreen MMI) is larger. Some people will prefer the intuitiveness of a touchscreen, although it is more difficult to use when driving, and potentially hazardous.

In fact some functions are prohibited on the move, even preventing front-seat passengers using them.

I had got used to the rotary controller in the A4 I had been running up to the delivery of this car. But so far, overall, I am not unhappy with the change and, 2,000 miles in, the petrol engine is in its element on motorway cruises, regularly showing an indicated 50mpg-plus on the trip computer.