A change in the weather is hitting the Q4's range.

November saw us adjusting to the change of clocks, and the Audi to the start of autumnal frosts. This is my first winter in an EV, so I was interested to see if there were any more issues to getting it defrosted for early school runs. I usually rely on the engine to warm the cabin up and defrost the windows. Despite the lack of engine with the Q4 E-tron, I'm pleased to say the power of the heater more than makes up for this. The Q4 has a big front screen, but thankfully the heat cut through the ice on this and the side windows in minutes - with the back window taken care of by the heated rear window.

Elsewhere, the heated seats quickly warm up the always cold leatherette and the heated wing mirrors are the sharpest I've tried. So, to sum up, cold mornings are no more of an issue with the Audi Q4 E-tron than if I were driving a piston car.

Sadly, as expected the cold weather is having an effect on the Audi's electric range. We've gone from 250 mile charges (I've never seen the claimed 270 mile range) from my 7kW home charger in warmer September, to 220 miles charges now. I'm pleased to say that even with this range drop, I've not experienced any range anxiety issues - so far. However, I'm more likely now to take up the offer of a top up, if destination charging is available where I go. 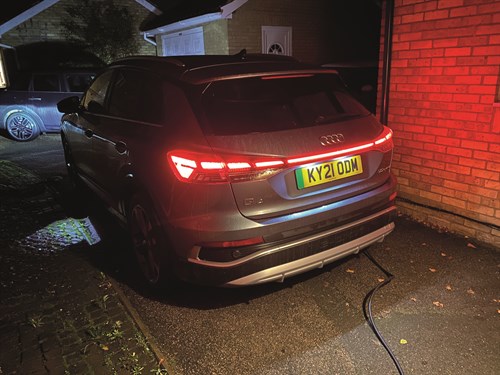 More time behind the wheel of this Audi has further crystallised what I like about this car. As I mentioned before, I really appreciate its refined drive thanks to its lack of engine, which I'm sure makes me feel less tired when I get to my destination. The stiff ride is least noticeable there and, at motorway speeds, all you're aware of is a bit of tyre noise and whatever music you've got coming out of the powerful stereo. Then there's the performance, which, even in regenerative 'B' mode, I've found the acceleration is instantaneous enough to put a smile on my face without denting the range too much. The handling is tidy too. Not sporty, but I'm already feeling the benefits of the extra motor and Quattro four-wheel drive, with welcome added grip in slippery corners and roundabouts.

I still like the way it looks too, and the Geyser Blue paint seems to be resisting the road muck well. The fact that the Q4 E-Tron is still a relatively scarse sight on UK roads means it gets more attention than you'd expect. I reckon the only bad angle is from the front, straight on, as the faux grill dominates and looks ungainly.

Then there's interior, which in my opinion is the most ICE car-like of the three Volkswagen Group EVs built on the MEB EV platform. The touch-screen infotainment and satnav are easy to use and I have buttons rather than sliders to control the ventilation - which are very welcome. Some of the plastics are harder than you might expect of an Audi, but they respond well to cleaning.

Thankfully, there aren't many things I don't like about the Q4 E-Tron. After a couple of months behind the wheel I'm getting more used to the Q4's dimensions, but I still think the general all-round visibility of this Audi is poor. I used to scoff at extras such as a rear camera on test cars, but in the Q4 E-tron's case, I do believe it should be fitted as standard across the range.

The infotainment hasn't been glitch-free either. So far, I've had two instances where the whole system has frozen, then more worryingly shut down completely. I'm pleased to say on both occasions it restarted quickly, but if it persists a trip to the dealer beckons. At the same time, I've experienced random warnings on the dashboard - so I wonder if the two are linked? Then there are the illuminated controls on the steering wheel, where the voice control is all too easily operated when all I wanted to do was adjust the volume. Although, it could be that these controls were not designed for my sausage-sized fingers!

Just weeks into my time with the Q4 E-Tron and the UK was plunged into a fuel crisis, with my local petrol stations dry for at least two weeks. So, it was a great relief to be running the Audi, as it certainly kept my family and I mobile during this time. It was a great comfort being able to plug the Audi into my home charger, rather than having to join a queue for petrol and be stuck there for hours.

As I mentioned in my last report, having lived with another EV with just 120 miles of range, my big worry during this time was having enough charge to get me where I needed to go. So far, I must admit I've been pleasantly surprised. As a full charge has proved to be more than enough for my daily schedule - although I've not quite seen the 295 mile quoted figure and more destination chargers would be welcome. Now it's a bit colder, it will be interesting to see if the range tails off. 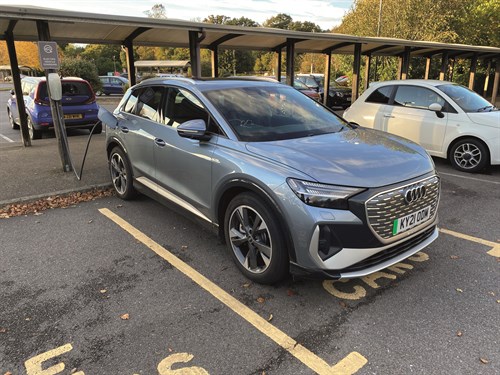 Longer drives have also made me appreciate what a refined and relaxing car the Q4 E-Tron is to drive. The driving position is comfortable, the seats supportive and with no engine noise, I'm able to fully appreciate other items of kit, such as the impressively punchy optional SONOS sound system. With almost 300hp, there's ample performance, but use it heavily and it does dent the range.

The only fly in the ointment, is the low-speed ride, which can feel unsettled and pitchy. Having also spent a decent amount of time in Hyundai's impressive Ioniq 5 EV recently, I've concluded that most of the current crop of EVs suffer the same problem. With the cause being the weight of the battery pack, affecting the dynamics - as the Hyundai felt much the same. I'm sure this is something that all the manufacturers are working hard to improve and as battery technology changes, dynamic shortfalls such as this, will be eradicated.

Audi has big plans for the Q4 E-Tron, as it said at the launch earlier this year. The German company is predicting that this small SUV will be its second-best seller in the UK after the A3, with 20,000 units forecasted for the first full year of sales.

It certainly gets off to a good start in the looks department. I really like the Q4's sculpted style, short overhangs and raked front windscreen. The shape also suits the optional (£575) Geyser Blue paint and 20in 5-Y-spoke wheels finished in graphite (£150). Overall, the Q4 is familiar enough to be recognisable as an Audi - but with a modern twist.

Built on the same VW Group MEB dedicated electric platform as the Volkswagen ID4 and the Skoda Enyaq, at 4,588mm long it fits between the Q3 and Q5. Although, it feels much bigger inside - thanks to clever packaging. Head and legroom are particularly impressive.

The 40 model is expected to be the top-seller, with its 304-mile range, but we have the range-topping 50 Quattro with 295hp and a 295-mile range. Ours is in popular 'S-Line' trim and is fitted with plenty of options, some of which - because this is an early car - wouldn't normally be fitted to this trim - or even be fitted to UK cars at all.

So far, I've only been short distances, but this I'm sure will quickly change as my diary fills up. However, I've found the Q4 E-Tron a potent and responsive drive, with tidy handling.

Having lived with another shorter-range electric car for six-months, the 260 miles claimed from the Audi seems a luxury and less likely to cause worry about range anxiety. However, so far charging has been limited to my 7kW wall box. The consensus is the public charging network is improving, so now is my chance to see if this is correct.

Already, there's plenty to impress. The headlights in particular are brilliant, the way the optional (£1,075) Matrix LED headlights can keep full beam on for longer is surely going to be an asset as we head into the darker winter weather.

Electric or not, interior quality seems a match for Audi's ICE engine models. Also, I'm pleased to report that the physical buttons for items, such as the ventilation work, so much better and are far less complicated to use than the touch-screen sliders seen in the other VW Group models.

Gripes so far are limited to the lack of rear-view camera, part of the expensive Comfort and Sound package (£1,295), which sadly our car doesn't have. Normally this wouldn't be a problem, but I've found the Q4's all-round visibility isn't great.

Also, I haven't seen a quartic steering wheel fitted to a car since the Austin Allegro in the 70s. The Q4's is taking a bit of time to get used to. It is nice to hold but is all too easy to catch the multi-function buttons - when you don't want to.

Still, I'm looking forward to learning more over the next few months and seeing how the Q4 E-Tron performs over the winter months.