This is going to sound weird coming from someone who writes about cars, but I don't drive much. Long story short, I am based in Bogota, Colombia, and I work remotely for the UK press. As a result, I tend to specialise in driving a desk, but a fortnight-long return to England, combined with the departure of former features ed Rachel Boagey to Canada (we are an international lot, us), left Business Car's long-term 3 Series at a conveniently loose end.

Something with a leggy diesel engine and a decent-sized boot is the tool for the inevitable mileage I rack up on such trips, and I am honestly not just saying this because I pilfered it for two weeks, but I genuinely can't see how they come much better than the 320d. 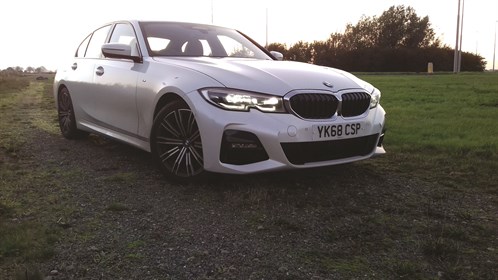 If the BMW's official claimed fuel economy figure is to be believed, I actually exceeded it by 0.3mpg, averaging 54.6mpg for the duration of the trip. It spent most of its time on the motorway, comfortably below 2,000rpm, which probably explains the spike, but I wasn't shy about flexing its 206hp legs, either. Ride, refinement and the automatic transmission were all top class.

I do have some gripes after two weeks of virtually living out of the thing, but they are minor. The lane-keep assist is a bit too keen and, really, needs turning off if you want to make a small and perfectly legitimate manoeuvre over a broken white line, while the nearside wing mirror's habit of angling down when you engage reverse actually makes it harder to see what is behind you. There is also a little too much going on within the instrument binnacle for one person to effectively take in while driving.

However, they are small potatoes in the context of what is, overall, an extraordinarily competent car, and it isn't in the least bit difficult to see why it is so coveted by fleets.

The BMW 3 Series is often perceived as the executive car that has it all. It is a big hit with friends, family, and even people in the industry who also get long-term test cars. My 320d usually prompts an "oh nice" around 100% of the time when I reveal what I drive for work.

Since the 320d joined our Business Car fleet a couple of months back, efficiency, high-speed ride and cruising refinement, plus in-car technology, are all things that affirm the 3 Series' position in the spotlight.

However, what friends and family also always comment on is whether a 'dirty' diesel can really pull through in the efficiency department.

After a recent long-ish journey to Silverstone for the BTCC, I was clearly feeling like a bit of a racer on the way home and popped it into Sport mode for most of the journey - and still managed 49.8mpg. 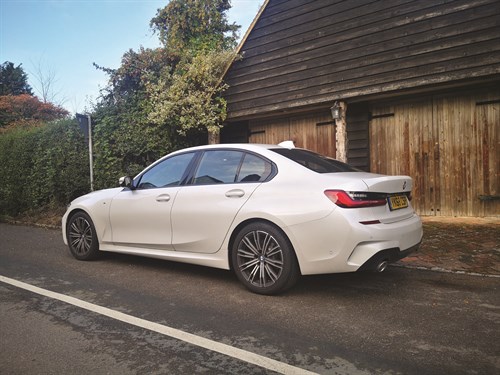 The 3 series claims an official fuel economy of 53.3mpg and CO2 emissions as low as 113g/km, with the latter making the all-important BIK company car tax band for a premium vehicle like this surprisingly low. And amazingly, we are matching that claimed economy in our daily use (when not assuming the role of a BTCC driver).

BMW offers a wide range of engines in the 3 Series. Petrol and diesel models make up the bulk, with a plug-in petrol hybrid also offered. The most efficient conventionally powered model in the range is the 318d in SE trim with a manual gearbox. However, thanks to the decent fuel economy figures stated above, this more powerful 320d doesn't lag too far behind, despite six cylinders and 260hp, making it a great cruiser for those motorway slogs.

So, dirty diesel or mpg master? I will leave that to you to decide.

I'm the kind of person who likes buttons. No, not the chocolate ones, although I wouldn't say no. I'm talking about physical, pressable, haptic, buttons.

Luckily, the 3 Series has an option of both touchscreen functionality and the more manual, old school buttons that I'd always opt for, which not only mean you don't often have to look away from the road while driving, but you also don't have to constantly wipe grubby fingerprints off the screen.

If you're on the move you want to be making the most of the rotary dial in the central console, which is classic I-Drive, and we're very glad that it's still there. It can be used to scroll up and down menus, which are brought up, by using the 'quick keys' surrounding the dial. Letters and numbers can be drawn onto the dial when searching an address or postcode, but it's not advisable to use this while driving, as it's far too difficult with the movement of the car. Despite the quick keys, there are lots of menus within menus, and sometimes I wish it could just be a little simpler to find what you're looking for. 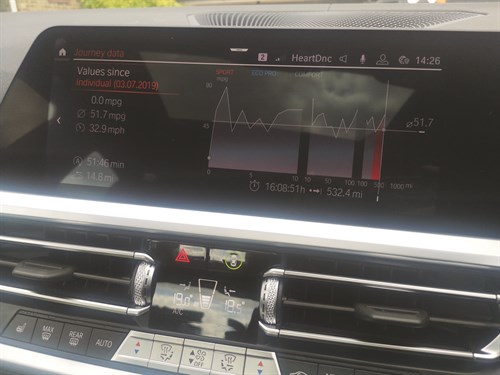 There is voice control available activated by saying "Hey BMW" but it takes a long time to learn what it responds to and how to structure what you ask. Asking to navigate to a particular address or POI, for example, hasn't worked very well, if at all yet, despite trying it almost every time I drive.

Thanks to the technology package added on to our test car, the 3 Series is also equipped with a head-up display, enhanced Bluetooth with wireless charging, and a WiFi hotspot package which we've since learnt is of no use in the UK, as it's used mainly on the continent where folk don't have the copious amounts of data that we normally do.

No, I don't think I've suddenly morphed into Hermione Granger, but the pack also includes BMW gesture control. I must admit that although quite a cool gimmick to show a passenger for about two minutes, it can only really control the music volume, and boy, does that take some getting used to. Whenever I try to show off my Expecto Patronum, it either lags terribly or doesn't respond at all, so I can't help but feel that until it works properly, it's unlikely to catch on or become more than a gimmick to show your mates, and I'll tell you something for free, it definitely wont pull me away from my love for buttons.

Since the 3 Series was launched in 1975, BMW has sold 50 million worldwide, so this seventh-generation version has a lot riding on it.

Much of its success has come from fleet and the 3 Series is already a staple in the company car favourite list, so we have welcomed the latest version onto the Business Car long-term fleet, in the 320d saloon M Sport guise.

This premium saloon, like many of its kind, is set to spend plenty of time trawling up and down the motorway, so there are a few areas that are absolutely key: efficiency, high-speed ride and cruising refinement, comfort, and in-car technology to make those journeys easier and more effortless.

In M Sport equipment grade, our test car has NEDC-correlated CO2 figures of 112g/km, but this will rise to 142g/km under the new WLTP official test procedure, which will apply if the car is registered after 6 April 2020. Due to its diesel engine and non-RDE2 compliance, the car also carries a 4% diesel supplement, taking it up to the 30% BIK bracket for company car tax.

As for fuel consumption, the car hits the 54.3mpg mark for the automatic version we have on test. This transmission also allows the car to accelerate from 0-62 in 6.8 seconds. The 2.0-litre diesel engine has a maximum output of 190hp, torque of 400Nm and a top speed of 149mph.

There are some changes in the latest version. Firstly, it is around 55kg lighter than the previous car and although the boot is the same size at 480 litres, due to the longer wheelbase there is more room in the back seats, meaning plenty of head and knee room.

The M Sport model places particular emphasis on making the driving experience engaging and interesting, due to the long-distance cruises it is likely to be used for, and features the new BMW Live Cockpit Professional with a 12.3in digital instrument cluster as standard, a 10.3in central instrument cluster and BMW's brand new Operating System 7.0 with Intelligent Personal Assistant.

On top of this, we have opted for the technology package, which adds the head-up display, enhanced Bluetooth with wireless charging (useless, as I just discovered my Huawei isn't equipped with wireless charging capabilities), BMW gesture control and Wi-Fi hotspot preparation (which I haven't figured out how to use yet). We also opted for the premium package, which equips the car with an electric glass sunroof, electric front seats and driver memory (handy as I am 5ft 1in and everyone else is taller), and lumbar support for the driver and front passenger, ideal for those long motorway slogs. A comfort package is also an option, which allows for things like a heated steering wheel and electric-powered boot lid operation.

Unfortunately, while the 3 Series offers Apple Carplay, it is lacking in Android Auto capabilities, meaning the user will have no choice but to use the built-in systems provided by BMW, making it more of a mobile marketing suite. More on that in a later report.

All options, including the parking assistant plus, which I will definitely be testing out in a future report, amount to £8,430, meaning the car's P11D reaches £44,620. Testing out the stiffer-than-standard M Sport suspension and gripping its chunky M Sport steering wheel, I will be putting the 3 Series to the test over the next six months to discover if it really is the ideal company car, offering everything in terms of efficiency, refinement and those all-important running costs.