As we settle into our C5 Aircross loan, it seems right to focus in on Citroën's well-known ride comfort as an early topic.

Unlike some brands with nebulous distinctive attributes or historic values, there are certain things a driver expects from a Citroën, and great ride comfort is one of them. Anyone lucky enough to have driven a classic DS will know what I'm referring to and Citroën engineers throughout the decades have followed this dignified pursuit.

Despite arguably losing its way somewhat on this core brand value in the late-1990s and early 2000s, current Citroën vehicles have reclaimed it and with some aplomb. Indeed, one of the first things I noticed after swapping out of our previous Volvo XC40 test car and into the Citroën C5 Aircross, is just how cosseting its ride is. Potholes and variably-sized speed bumps common to London's streets have instantly become much less of a problem (and the XC40 wasn't that bad). The C5's front McPherson strut and rear multilink suspension system with progressive hydraulic cushions are the reason why, even with big 19in alloys fitted, which can often make a car look good at the expense of ride. Not in this case, the 19in lend the C5's side profile a good proportional stance, while inside we glide along oblivious to the road's many imperfections. As Citroën's website explains: "While conventional suspension systems comprise of a shock absorber, a spring and a mechanical stop, the progressive hydraulic cushions system adds two hydraulic stops on either side, one for rebound and the other for compression. In cases of major compression and rebound, they gradually slow down movement to avoid sudden jolts. In cases of slight compression and rebound, they absorb dips and bumps in the road to deliver a 'magic carpet ride' effect." 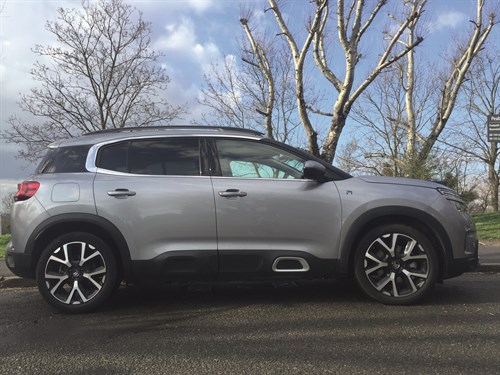 For once, the marketing blurb and catchphrase is spot-on. I'm not sure Aladdin would trade in his actual magic carpet, but the C5 is undoubtedly a safer (real-world) bet and more comfortable with it, courtesy of Citroën's Advanced Comfort technology, which combines high density foam in its seats and a 15mm thickened and textured foam on the surface for less sag while not feeling like an upholstered brick. In addition, front seats are height-adjustable and heatable, while the driver's seat on our model has a multipoint massage system with five programmes. We've tested the three-stage heated seats already and will report on the massaging function in due course.

One other small detail on the C5 that might normally be quite useful - an audible speed camera alert - we've sought to switch off for now. It's not only very noisy and unsettling, but also repetitive, making a loud beep that we can't easily turn down. It's partly situational. There's a speed camera on the corner of my road, so every time we get in the car and drive off, the alarm sounds and does so again when you drive through the speed camera's path. This was starting to drive us a bit potty as we tried to turn it off while out and about without success, until a phone call to a kind PR at Citroën UK HQ told us where, within the central infotainment system, the 'risk areas alert' could be found and un-ticked. In case you're similarly afflicted, it's four layers deep within the navigation system (Menu/Settings/Alerts/Risk Areas Alert). However, on our car's system this item still wouldn't untick unless you put in a destination, let the TomTom system fully load up and then go back through the layers and change it, which by anyone's standards is a little unwieldy. Now I just need to remember to keep to the speed limit. At least the driver display includes traffic signal recognition symbols, so there's little excuse.

It's rarely a worry taking on a Citroën test car. French flair and great ride comfort are usually givens, but quality is an area the marque has historically struggled with and is wanting to address in its newer models. So, with our newly arrived C5 Aircross plug-in hybrid (PHEV), we will be aiming to evaluate that and more for the next half-year.

Compared with our outgoing Volvo XC40 compact SUV, the C5 Aircross is a little longer (4,500 versus 4,425mm) and a bit taller (1,670 versus 1,658mm). These are different enough dimensions that all occupants should be able to feel inside and places the vehicle on the cusp of the compact and mid-size SUV sectors. Rivals vary from the smaller Kia Sportage (4,485mm) to the bigger VW Tiguan (4,509mm) and Ford Kuga (4,614mm).

As veterans of a Citroën Cactus just three years ago, we're well used to the slim, wraparound and joined-up lights and logo front-nose approach, albeit here supplemented with another set of bigger headlights and grille directly below and sat within a higher bonnet, and bigger and taller overall proportion. Inside, passenger space front and back feels generous, and the material quality is less pared back and more premium. Boot space measures up at 460 litres seats up and 1,510 litres with rear seats folded flat. Of particular note are the striking part-nappa leather, part-leather-effect cloth seats, whose brown rectangular-shaped seat-back and squab pads resemble huge rows of enticing chocolate chunk, but without the associated danger of sitting on an actual chocolate bar (especially with heated front seats and driver's seat massage function as part of the overall £1,770 option). This Hype Black Ambience pack is one of this test car's two cost options, the other being the Cumulus grey metallic paint (£545). On brief acquaintance, both seem worth it. 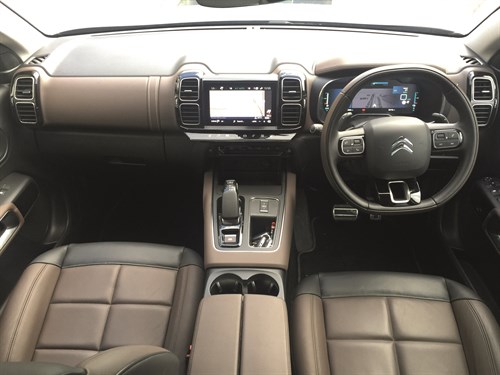 That pushes the original price for the C5 Aircross Shine Plus to £38,150 as tested. But its plug-in hybrid status, 32g/km official CO2 and 33 miles of electric range, means it still only attracts an 11% BIK band from April 2021 (which we're using as the start point of this test, given how few days of the current tax year are left). Beyond the useful fiscal incentive, plugging in as much as we can will of course affect our real-world mpg, but we're under no illusion of getting anywhere near the official 166mpg. We're almost more enthused by the four-cylinder, turbocharged 181hp 1.6-litre petrol engine's ability to drive the wheels and also feed power back into the battery by pressing the Harry Potter-style lighting bolt button to the left of the centre stack, just above the 8-speed auto gear shifter. Taking this approach straight after collection on a 60-70 mile trip has already gained us 23 electric miles to use back in the city without fuss. The B+ gear mode as default at other times gives good re-gen too.

That same engine, alongside the 81kW electric motor, combines to create a hybrid maximum power output of 228hp and a promised 8.7-second 0-62mph time. Although standing-start sprints aren't part of my usual driving road test MO, the C5 certainly does seem usefully sprightly and exceedingly comfortable too, suppressing potholes and speed bumps like few other cars.

Specification on our top-level Shine Plus trim is generous. Safety kit includes collision risk and driver attention alert and traffic sign recognition, while infotainment includes Apple Carplay mirror-linking, and front and rear parking sensors among its standard features (unlike our outgoing Volvo XC40, which charged for much of the latter). It's very early days of course, but we're really looking forward to stretching this C5's legs on some long missions as UK's Lockdown 3 restrictions hopefully keep easing. Fingers crossed.

Standard equipment on Shine Plus: