Although it's only been a month since our Cupra Formentor pitched up, I promised to keep schtum about the erratic aspects of its infotainment system until I was fully familiarised with its modus operandum. However, I find I am unable to contain myself.

In my defence, I feel somewhat justified in wading in on its idiosyncrasies at this early juncture, as I have spent lots of time with similar set ups in other VW Group products.

My first encounter came when VW showcased this all-new, all singing and dancing setup on an early drive of the MK8 Golf, and that didn't go particularly well.

The fact VW caveated that particular drive with 'the system is still undergoing final testing, so it might be prone to one or two glitches' seemed fair enough given the cars were pre-production examples. Still, that drive took place only a month or so before the car was due to go on sale, so my cynical eyebrow couldn't help but break out into a bit of a twitchy dance routine.

Sure enough, the responses of the touchscreen proved to be somewhat erratic and less than willing to play ball, especially when coupled to my iPhone. Things went from bad to worse a few miles into the drive when the screen suddenly decided to turn a delicate shade of fuchsia, the graphics became pixilated, and the screen then began to break up like a 1950's tube telly being buzzed by a low flying aircraft.

No problem, VW assured me, these were well-documented teething problems, and a fix would be sorted and installed long before the car's official on sale date.

Strange then, that some months later, I experienced exactly the same issues during the Golf GTI launch and almost two years after the Golf launch, the Formentor has decided to come over all pink and pixilated. 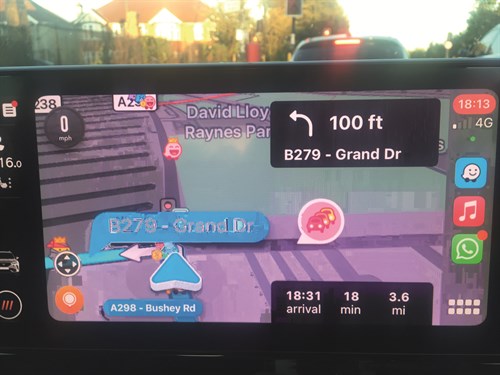 To be fair, a simple reboot following the tried and tested switch it off then back on, restored matters to working order and to date it has only happened once, although that experience did leave me with the distinct feeling that gremlins still lurk within.

Among other frustrations are two stand out protagonists. Firstly, the heater controls whose touch-sensitive temperature responses are so hit and miss I'm pretty sure I've rubbed the fingerprint clean off my index finger trying to get the cabin atmosphere to match my requirements. Granted, there are supplementary ways of adjusting the temperature, including accessing it via the touchscreen, but this requires a prod of the screen at least twice and manipulation of a slider to adjust the setting. The alternative approach is to use the voice activation by saying 'I am too hot' or 'I'm too cold', which brings a response of 'it will get warmer or cooler in a moment'. All well and good, but warmer or cooler is an undetermined condition, especially as one man's cool is another woman's blooming freezing. Worst of all, although the aforementioned touch sensitive adjusters are coloured blue and red, they are not backlit, so they are virtually invisible when driving at night. This seems all the more ironic when you can change the colour of ambient lighting by at least half a dozen different hues.

Given the frustrations of operating the screen, the foibles of the lane-centering system seem inconsequential but perfectly random and, for some unknown reason, this will begin to ping like a ship's bell and flash up an amber alert on the dash telling me to drive within the middle of the lane. Totally contradictory to what the system is telling me, I find the best way of silencing this unwarranted soliciting is to give the steering wheel a couple of sway inducing tugs.

Apart from these grievances, the Formentor is still an impressive bit of kit and, although it has started making a few unexpected groans and clunks relating to the electric drive overall, it remains in my good books; at least for the time being.

Although no explanation was necessary when one of my petrol head mates asked me what car I was running around in at the moment, the perplexed look on the face of one of my less well-informed buddies said it all.

That's because the car in question is a Cupra Formentor and, not belonging to the 'in gang', my friend implored me to tell him 'what on earth is a Cuppa Fermenting?'.

Explaining that it wasn't an exotic herbal tea and boiling it down to 'it's kind of a funkier version of the Seat Ateca,' even as the words were leaving my mouth I sensed my tongue turning black, because to dismiss the Formentor in such inarticulate terms, is doing it
a massive disservice.

For a start, the Formentor is the first Cupra model that isn't just a rebadged and retrimmed version of an existing Seat.

Yes, it shares much of the same hybrid running gear and mechanical componentry as other Seats and many of its VW Group contemporaries, but the Formentor is very much a stand-alone model, thanks not only to its exotic styling but also because of the way it drives.

It certainly turns heads wherever it goes and, granted, some of that attention may be down to its new model scarcity and the unfamiliar badging, but the mash-up of a rakish bonnet, razor-cut wheel arch extensions, fat boy alloys, lighting bolt LEDs and copper accents also give it
a certain 'check-me-out' street cred.

Personally, I love the four-square stance and hunkered down looks and normally, I might be inclined to say it looks more sophisticated and far more expensive than it actually is, were it not for the fact that at £38,000, it's not exactly a cheap car.

This is heady stuff when you consider for the same kind of dosh, you can get behind the wheel of a Range Rover Evoque or a Toyota Rav4 hybrid, or if you're feeling fully committed to the electric dream then a Kia Niro can be standing on your drive for quite a bit less. However, first impressions suggest the Formentor may be well worth its salt.

For a start, the hybrid system is an absolute gem. Blending a 1.4-litre four-cylinder engine to DSG automatic gearbox and a strident electric motor ensures it's a multitalented device.

Fully charged it will cover 30 miles powered solely by its batteries and, but for the odd whirr and unexplained clunk, the electric motor is pretty near silent in operation. Other than an initial flaring of revs when the petrol engine kicks in, it too, is a cultured device and together the two power sources deliver fairly zesty levels of performance.

As for economy, this is a bit of a tricky one. Running solely on electricity, the infotainment screen proudly beams out a steady 300mpg, but the long-term economy readout suggests I'm averaging closer to 50mpg.

To be fair, the Formentor is a victim of circumstance here, as I am bereft of anywhere to plug it in overnight. Consequently, I'm reduced to scavenging juice wherever and whenever I can, so I'm relying on the petrol engine a lot more than someone who has access to a home or office charger.

As I hinted earlier, the Formentor is a cracking drive. The chassis is essentially the same as you'll find under more expensive versions of the VW Golf, although it is tuned to reflect the Cupra ethos. As a result, the low-speed ride is a bit on the sharp side and the tyres do sing a bit when driving over coarser surfaces, but given its head down an undulating stretch of road, the combination of sweetly weighted steering, tenacious grip and speedy reactions really ramp up the grin quota.

On the sad emoji front, I confess I'm a bit disappointed by the amount of boot space the batteries consume, but this is coming from a bloke who carries around more tat than a rag and bone man, so I suppose I'll just have to get used to packing more in line with budget airline allocations than business class.

While the interior is smartly designed and lavishly trimmed, and the seats provide excellent comfort and support, when it comes to interacting with the infotainment system, let's just say at this moment in time discretion is the better part of valour. I will give it the benefit of the doubt for a month or so and hopefully, given that amount of grace, things will begin to click but, as it stands, I'm finding its unfathomable complexity trickier than a magician's hat.