2nd Report: All aboard

While Business Car contributors with families have obvious, regular opportunities for testing the practicality levels of long-term test cars when they are fully loaded, those of us without often have to improvise. It was fortunate, therefore, that a recent opportunity arose to fill the Puma with passengers, in the form of a friend's stag do, for which I assumed responsibility for driving to and from the planned (daytime, non-alcohol related) activities.

So, what were the observations of back seat passengers that I'd previously missed? Well, aside from three adult men being able to fit back there in reasonable comfort, they liked the panoramic roof, which I hadn't noticed before is divided into two sections, meaning those in the rear can pull back the blind and let light in, without disturbing those sitting up front (i.e. me) who might prefer less light coming from above to help them concentrate on the road (although only the front section can be opened). 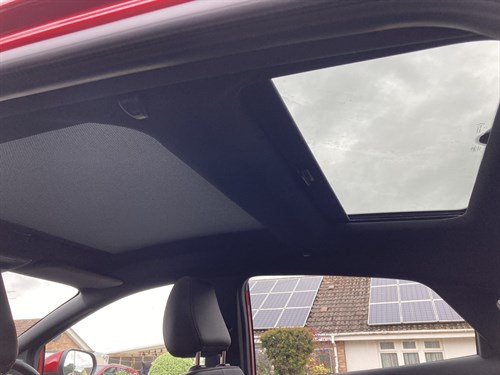 On the downside, they noticed a lack of grab handles back there, the provision of which might have made things a tad more comfortable as we bounced around on the heavily rutted lane to and from our campsite. From my point of view, having previously dismissed the instrument panel seat belt indicator, which appears on start-up, as a trivial annoyance, I realised how useful it was to have visual confirmation that everyone was strapped in before we set off, removing the need to ask - welcome enough for saving stag do cool points, never mind how helpful I imagine such a system must be for parents with kids in the back.

The hilly roads of Dorset did, however, reveal an apparent issue with the Puma, where having waited on an incline I found myself rolling backwards a couple of times when I tried to set off. Confused at having apparently forgotten how to drive, I ended up overcompensating and setting off with learner-style, needlessly high engine revs for the rest of the trip, until I could investigate what was going on. It turns out that the hill hold assist system, which I knew the car was fitted with, is governed by the footbrake, and will only apply for five seconds if the car is being held by the (manual) handbrake, meaning that if the car has been stationary for more than a moment, such as when waiting for a queue of traffic to pass on a narrow lane, the old art of proper clutch control is required when setting off again, rather than relying on the electronic helper. Although this did catch me out at the time, I'm more willing now to attribute the situation to my being spoiled by the electric handbrakes and automatic gearboxes that the majority of press test cars come with these days.

1st Report: In the red corner, the reigning champion...

When Ford introduced its new Puma, I was the first member of the Business Car team to drive it, having been lucky enough to attend the car's international launch in Spain over two days in January 2020. For very obvious reasons, that now seems like a very long time ago, but I do remember coming away highly impressed with a model that combined clever practical touches with being the best small SUV to drive on the market. It's an impression that was subsequently supported by my fellow judges for last year's Business Car Awards, where it picked up the overall New Company Car of the Year accolade. However, with the passing of time and the very different world in which we find ourselves now, it seems worth revisiting the model, to see if those extremely strong first impressions still endure now the glow of the initial launch has worn off - and also, having personally not driving the car in the UK before, to see if our rough home-grown road surfaces will reveal any flaws I missed in the Spanish sunshine.

To find out, we've added the car here to our long-term fleet, in attractive (if unsubtly named) Fantastic Red paint. It's an ST-Line X model, meaning it sits near the top of the range and gets equipment such as a 12.3in driver display, a ten-speaker B&O premium audio system, a wireless charging pad, and 18in alloy wheels. In addition, the ST-Line designation means it sits towards the sportier end of Ford's model line-up, and features elements such as a bodykit (including what Ford specifically bills as a 'large rear spoiler'), and also sports suspension. The latter feature in particular is one I'm keen to investigate, since while I already know the Puma is good in the bends, UK roads might leave it more susceptible to any related compromise in ride quality.

Our Puma comes with the most powerful engine option in the range short of the full ST performance model, a 155hp petrol mild hybrid, with the electrified system using a 48V battery to assist with acceleration and help reduce CO2 emissions. In our car, the engine is paired with a six-speed manual gearbox, rather than the seven-speed auto that's also available. The stick-shift should make for a more engaging drive, however it remains to be seen if I'll end up missing an auto on long journeys, especially since the manual means there's no stop-and-go function with the adaptive cruise control fitted as part of our car's optional Driver Assistance Pack.

One thing is for sure - with lockdown restrictions eased, and business and social travel diaries filling up rapidly, our Puma is sure to be covering plenty of miles over the next few months, meaning there'll be no hiding any weaknesses. However, having won us over so thoroughly at launch, it would be a major surprise if we uncovered many flaws.