Our Hyundai Ioniq hybrid may be benefitting from a favourable comparison with a previous-generation equivalent.

3rd report: Not so great expectations

My first experience of driving a hybrid car was a few years before I became a motoring journalist. As a local newspaper reporter, I borrowed a Mk2 Honda Insight (the more conventional follow up to the quirky coupe covered in a previous Business Car Trailblazers feature) pool car for an hour's drive up the motorway to a meeting at another office. I remember the driving experience being pretty lacklustre generally, but things got a lot worse when I encountered crosswinds, which, with the combination of skinny eco tyres and slab-sided design, had me twitching all over the road in a manner I had only previously experienced on a Playstation, driving down a simulated Mulsanne Straight at Le Mans in the pouring rain in a sports prototype racer.

Needless to say, this left an unfavourable impression, and until our long-term Hyundai Ioniq arrived, this was still my only experience of driving a dedicated hybrid vehicle, as opposed to a hybrid version of an existing petrol or diesel car. I therefore admit that my expectations for the driving experience were very low, and subsequently the Ioniq has proved a pleasant surprise.

It is still not brilliant - the ride could be more settled at speed, and it rolls quite a bit in corners, but in general it feels like a normal, if rather average, family car. A major advantage is the gearbox - where many hybrids have CVT units, notorious for a banding effect that sends revs soaring under acceleration, the Ioniq has a DSG unit as fitted to many petrol and diesel cars these days, and this works well, shifting smoothly and keeping the revs far more under control. 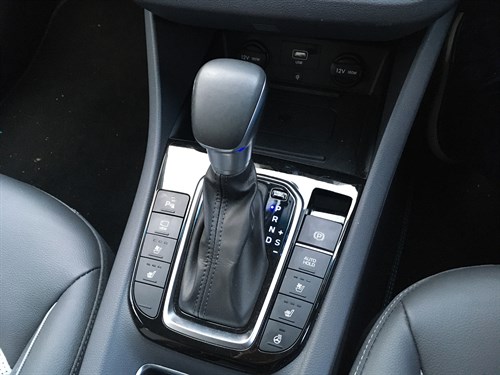 Admittedly, at first glance the steering wheel paddles allowing you to change gear yourself in 'sport' mode might seem a bit redundant in a car like this, but this is actually only an additional feature over their main function, which is to adjust the levels of regenerative braking from the hybrid drivetrain. There are three levels available of increasing severity, which use the car's kinetic energy to charge the battery, and at the more severe levels allow you to drive for much of the time without touching the brake pedal, instead using the resistance to slow you down. This is a good, potentially efficiency-boosting system - with two main drawbacks.

Firstly, it is turned off automatically after every trip, and I inevitably go some distance or indeed the whole way to my destination the next time I drive before remembering to turn it on again. And secondly, I find that in levels two and three the braking effect makes me start to feel nauseous, meaning I have to leave it in the less severe setting (although this is a personal issue that I imagine won't affect most).

Elsewhere, refinement from the engine is generally very good, and combined with the electric motor it produces plenty of power for regular motoring - although you don't get the rapid propulsion on offer from some of the latest wave of plug-in hybrids coming onto the market.

All in all then, I have not had too many complaints about the driving experience with the Ioniq, but at the same time there are not too many things to rave about. Given my low expectations, its modest capabilities have been enough to impress me, but more demanding drivers coming from better-driving petrol or diesel cars may be less satisfied.

I had planned for this second update on our Ioniq hybrid to be a wholly positive one, with an eye on the high standard of technology on offer. This is welcome, because if you want your fleet to go green, driver buy-in is critical, and whatever you tell them about fuel economy and CO2 emissions, they are unlikely to be too impressed if their previous highly specced petrol or diesel car is replaced by a bargain basement-looking hybrid.

Happily, in range-topping Premium SE spec our car has no such issues, and I have been enjoying using features such as the 7in digital instrument display, and the posh-looking 10.25in touchscreen with sat-nav and smartphone connectivity. I also like the regular Hyundai feature of displaying on the instrument screen  which setting you are in when you adjust the automatic wipers, saving a good deal of uncertainty and annoyance on a dark rainy motorway in rush-hour traffic. In these situations, the adaptive cruise control is also very good, slowing the car smoothly yet promptly when needed, and working well with the automatic gearbox. 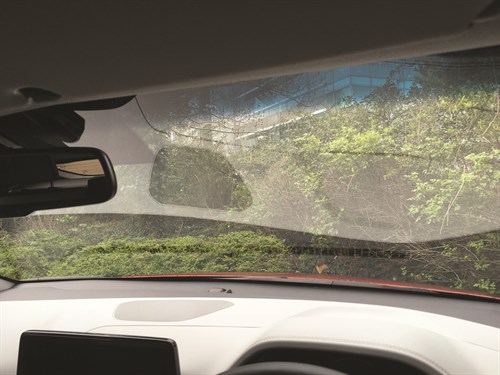 However, during this month my colleagues Simon and Illya have also spent time in the car, and both highlighted an issue with the top of its dashboard, which is light grey. This means it is reflected prominently in the windscreen, which both described as a major irritation - Illya said he initially believed the screen was fogging up, before working out what the issue was. It wasn't something I had personally noticed during my first weeks with the Ioniq, but having taken the keys back, now I am aware of it - and I'm afraid it is also irritating me. So to any readers who have a car in this spec and hadn't noticed, I apologise. The good news for the rest of you is this trim is part of the optional shale grey interior, so just make sure if you are ordering an Ioniq that the darker standard version is specced instead

With all the hype in the motor industry recently around plug-in cars - both hybrids and fully electric - you might wonder if the conventional hybrid is yesterday's news.

As a reminder, this is the powertrain first brought to prominence by the Toyota Prius around two decades ago. It uses both a petrol engine and an electric motor to power the car, with the petrol engine also functioning as the charger for the battery. It can run on electric power for brief periods, but no mains charging  is possible.

Compared with plug-in powertrains the disadvantage is obvious - all the energy used has to come from the car itself, meaning that on official fuel economy and CO2 emissions tests the systems can't hope to compete with those taking power from the grid.

However, there are still two major factors that suggest conventional hybrids are far from finished (pending 2035 new sales ban, alongside plug-in hybrids, notwithstanding).

The first is their continuing popularity - SMMT sales figures show that nearly 100,000 new conventional hybrids were registered in 2019, more than the total sales of plug-in hybrids and fully-electric cars combined. The second is that, despite talk of improving charging infrastructure, millions of UK drivers still have no facility to charge an electric or plug-in hybrid car at home.

I am one of them. I live in a first floor flat, with no street-level charging facility available - and if you think draping a charging cable out of an upstairs window would be bad enough, the fact that my test cars are often parked on the other side of a river will tell you that, for me, home charging is very definitely out of the question. There is a charger at the Business Car office, but a round-trip commute for me is further than the electric driving range of the vast majority of plug-in hybrids, meaning that while I could technically run one, I would have no chance of matching the official efficiency figures. So, for people like me who want to go green, is a conventional hybrid still the best option? 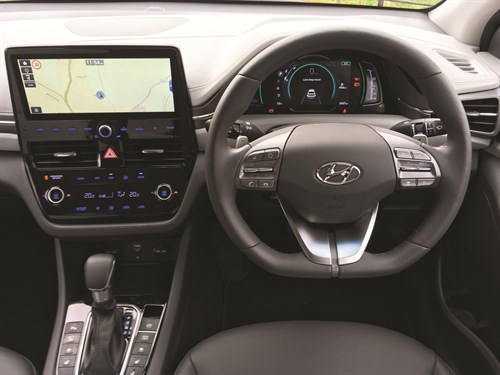 Well, that is what we are aiming to find out with this Hyundai Ioniq - and it is difficult to think of a more appropriate model with which to answer that question. This is because the Ioniq is the only car currently sold in the UK that is available as either a conventional hybrid, a plug-in hybrid or a fully electric car, allowing Hyundai to cater for all possible use cases.

The conventional hybrid I will be running arrived with just over 3,000 miles on the clock, and pairs a 105hp petrol engine with a 43hp electric motor, with a combined total output of 141hp. Official WLTP fuel economy is 62.8mpg, while NEDC-correlated CO2 emissions of 85g/km mean a 22% BIK liability in the current tax year.

It is not just the Ioniq's powertrain I am looking forward to trying out though, since with the range-topping Premium SE equipment grade our car gets an extensive array of standard equipment. Having taken delivery in winter I was pleased to see a heated steering wheel on the list, while there are also heated seats for the driver, and the front and outer-rear passengers (the front seats are also air conditioned for when the weather improves). A 10.25in central touchscreen and 7in driver's display mean the Ioniq's infotainment provision also looks bang up to date, while the list of safety systems on offer is extensive.

It is enough to help the car make a favourable first impression - the question now is whether the hybrid powertrain will match up to it in the months ahead, or just feel like the inferior choice compared with its plug-in counterparts.