A rugby hooker-sized mate of mine sat in the front passenger seat of the Lexus recently for a quick chat while waiting for our kids at a sporting event - and it is the first time it has felt a little tight for room in the car.

Otherwise, space hasn't been issue. My narrower, 5ft 10in-ish frame fits just fine, while not one of my three kids, not even the tall teenager in the back, has complained about feeling cramped on any journeys, even when sat with her 'annoying' siblings (although, she might be more vocal if there was a prop forward sat in front of her.). 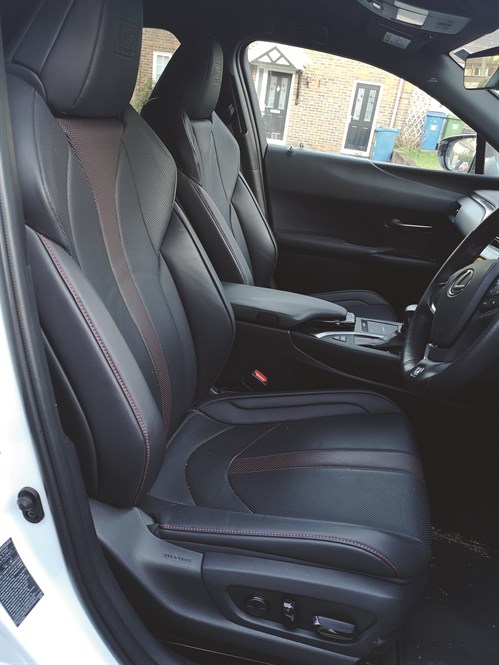 It should be quite a different story in the boot. Measuring 320 litres, it is small compared with the minimum rivals have to offer, with the Audi Q3 at 420 litres, the BMW X1 505 litres, the Jaguar E-Pace 425 litres, and Volvo's XC40 with 460 litres, but in reality we managed.

Yes, it wasn't perfect for a family of five for an overnight stay away, but with some squeezing and pushing we got everything in we needed. The eight-way, electrically adjustable F-Sport driver's seat is comfy (although I still use my own mesh back support as the lumbar support provision isn't enough for me - and usually isn't in any vehicle).

It (and the adjacent passenger seat) also reclines a long way, as I discovered in a 'who is the biggest idiot' contest, when me and my 11-year-old had a race using the electric reclining function to see who could go the furthest the fastest (we shared the prize). It reclines far enough to have a lie down.

The front seats are heated too on our model - nice at this time of year - as is the steering wheel, plus there is a button for demisting the side mirrors.

Other technology - part of the optional Tech & Safety Pack - that has proven its worth are the reversing camera, and front and rear parking sensors, plus the blind-spot monitoring system with rear cross-traffic alert.

On a couple of occasions the latter has usefully alerted me to cars speeding up residential road while I have been reversing off driveways. Less practical has been the fuel tank - it holds 43 litres, between five and 13 litres less than its rivals - which is why it feels like I am making frequent trips to the petrol station.

Whether you are a kid or an adult, playing games is one way of making dull car journeys more bearable.

One pastime I have used to manage my boredom is seeing for how far I can drive with the Lexus UX's green 'EV' light illuminated in the instrument panel, as this indicates when the electric motor is engaged, either on its own or in partnership with the 181hp 2.0-litre petrol engine.

It's an activity that is good for the planet and the pocket, and one I have since found is encouraged in the manufacturer's manual, which describes my technique as 'driving with the accelerator pedal slightly released'. 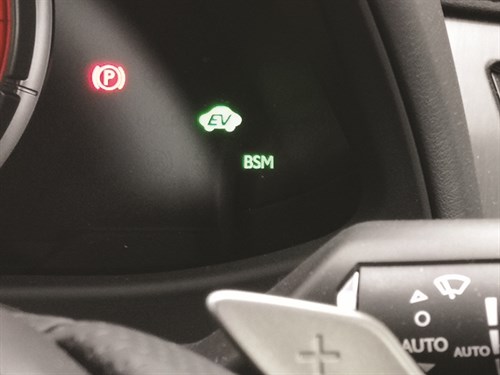 Other economy driving tips detailed in the manual include braking slowly over a longer distance to increase the amount of electrical energy stored for when EV power is applied.

Should you want to, it is possible to override the car's engine management system and switch to pure EV power - simply press the EV mode button located near the gear lever, and if enough energy is stored in the battery, you can, for example, drive silently in residential areas early in the morning or late at night without waking the neighbours with engine noise.

With my amateur-ish fuel efficiency skills and the driving mode selector knob - found on the side of the driver display cowl - turned to Normal (there are also Eco, Sport S and Sport S+ modes that will alter engine, transmission and suspension settings), the UX's fuel economy has returned figures ranging from a low of 48.1mpg for a tank to a high (so far) of 53.2mpg, compared with an official combined figure of 49.5mpg.

Some of the overall average of 50.7mpg can be attributed to the use of adaptive cruise control on the 50mph average speed-check section of the M4.

Other driver aid technologies that have proved similarly useful have been the blind-spot monitor, the rear-view camera and the all-round parking sensors (which have already reminded me to keep autumnal grime off as it effects their operation), and the Pre-Collision System, which as part of its suite of prang-prevention measures gives you a suitably alarming 'Brake' message in the instrument panel, even at crawling speed. Just don't ask how I know that.

Lexus has 10 hybrid models in its range, one of which is the UX. As a compact SUV it is the smallest of the brand's three-car SUV range and comes with three trim levels: UX, F Sport and Takumi.

We are driving the middle spec for the next few months. Power is provided by a 2.0-litre, four-cylinder petrol engine (under the bonnet) together with a nickel-metal hydride battery (below the rear seat), which, according to Lexus, is 'self-charging', so never needs to be plugged in.

Together, engine and battery deliver total power of 181hp and work in conjunction with a CVT automatic transmission. 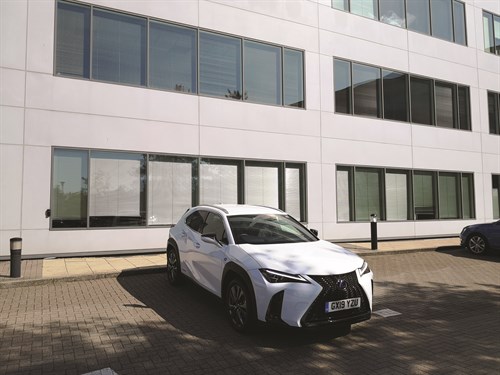 Our car has a top speed of 110mph and a 0-62mph time of 8.5 seconds, and CO2 emissions are quoted as 97g/km (NEDC correlated). The warranty, meanwhile, lasts for three years/60,000 miles, and also includes five-year/60,000-mile cover for both the hybrid battery and hybrid components, with 10,000-mile/annual servicing.

In terms of the vehicle's appearance, chief engineer Chika Kako says: "The aim for the new UX was not to conform to the established crossover look, but to break with convention and create something more distinctive and dynamic".

It certainly stands out, with at least one fan at a vehicle hill-climb event and exhibition grabbing a photo opportunity when I was caught up in the traffic heading to the annual show.

Our test car comes in the F Sport White metallic colour (for £570), which might have caught the photographer's eye, while two other options have been added. The first is the £1,800 Tech & Safety Pack, which includes the likes of a blind-spot monitor system with rear-cross traffic alert, head-up display, wireless smartphone charger, and front and rear parking sensors. The second is the Premium Plus Pack.

It includes a powered tailgate, a 10.25in screen (which replaces the standard 7in one), and keyless entry. All that kit goes alongside standard equipment such as Lexus Safety System+ (with Pre-collision System with pedestrian protection, adaptive cruise control, lane-keep assist, road sign assist and auto/adaptive high-beam), which contributes to the car achieving a five-star Euro NCAP safety rating.

The UX went on sale in the spring of this year and is expected to become Lexus's bestseller. It will also be sold alongside the ageing CT hatchback, despite initially being rumoured to be a replacement.

I drove a CT several years ago and was reminded of that upon sitting inside the UX and seeing a remote touchpad for the infotainment screen - a relative of the Remote Touch system I tried without much joy all those years ago.

The technology will have improved a great deal since then, of course, so I'll be interested to see how I get on with an updated version. The UX name is derived from the Lexus term 'urban crossover', which gives you more than a clue as to which environment the manufacturer believes the vehicle will be best-suited.

The car will be based at the mid-point between two large towns, and while the location where it will spend most time can hardly be described as urban, it will be subjected to more congested journeys too. It will also have to cope with transporting a family of five around. I will see you again this time next month to let you how it settles into the task.