I wrote a bit last month about how the fuel consumption of the A4 has impressed, and diesel still having its place on a fleet.

The A4's 150hp diesel engine seems to have taken it as a challenge and has been even more parsimonious since then, with the trip computer showing close to 67mpg at one point.

We're relieved that we opted for the larger fuel tank - the standard tank on diesel A4s is just 40 litres - as well as the larger Adblue fluid tank. 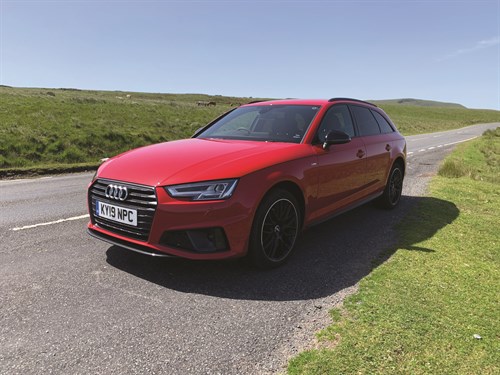 Having said that, with more than 9,000 miles on the odometer now, and with 55mpg-plus easily attainable, I don't imagine we'll get an Adblue warning before the car is returned to Audi next month.

Five months in, and the A4 has been remarkably trouble free, and very easy to live with.

The engine isn't the most powerful diesel available in the A4, but it's been a capable companion on my thousands of motorway miles, and fleets would probably discourage drivers from choosing quicker versions because of the payback in lower fuel and SMR costs - the front tyres look barely worn at this stage in their life too.

The A4 offers a number of shortcut buttons on the centre console, to help make frequently used tasks (navigate to the office, favourite radio station, etc) easily accessible without going through various menus using the rotary selector.

But I haven't found that an arduous task - growing familiarity with the car has made it relatively simple - although if it had multiple drivers, it might be worth doing to return to the main driver's preferred settings It might be a four-year old design, but the as the recently revised models now appear on the roads, the current car is still tough to beat.

I am probably preaching to the converted, but diesel cars are without doubt best suited to high-mileage driving, and will remain on fleet shopping lists for some time to come.

The engine in our A4 Avant, mysteriously badged 35 TDI but actually a 2.0-litre diesel producing 150hp, has been returning impressive fuel economy on long motorway runs, and even around town I have never seen it drop below 45mpg.

Diesel has gained a bad reputation over the last few years, partly caused by the emissions scandal that originated at Volkswagen, but resulted in suspicion of many other manufacturers, and with older diesels being tarred with the same brush as those meeting the latest requirements on exhaust gases. 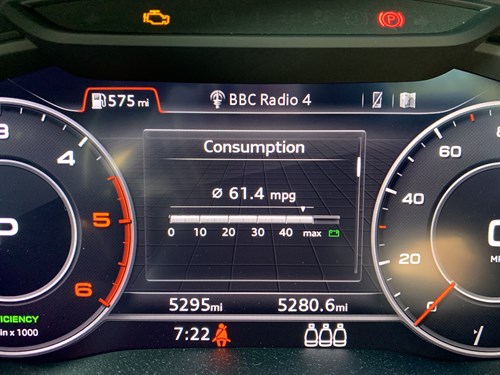 It means criticism of most of the latest diesel cars is unjustified, but many people have already decided to abandon diesel in favour of petrol.

But modern petrol engines - especially those smaller, downsized turbocharged models - are not capable of achieving high fuel economy with regularity in the same way as the best diesel engines.

I imagine no one driving a petrol car this size is typically achieving 60mpg and more on long journeys, and if anyone has switched to a petrol SUV, they probably should have offset the fuel costs by securing shares in an oil company.

One negative thing worthy of note during my recent drives is the pessimistic traffic delay calculation when using the car's sat-nav.

Of course, these systems can only calculate delays in the programmed route based on what is currently happening, and not by the time you reach the snarl-up.

But invariably, it is never as bad as the delay on the screen suggests, and map providers in my smartphone seem to give a more reliable estimate of journey time.

I've seen a predicted delay more more than an hour decline to less than half that during a journey, without resorting to the rerouting option. It always results in relief, but doesn't make it that easy to communicate ahead an arrival time.

3rd Report: Moving with the times

Our A4 has been on routine duties since its trip to the Netherlands (reported on last month), which means long runs to meetings, airports and the office.

One of the airport runs was for a trip to Italy to try the updated version of the A4, due to arrive in the UK this autumn, so it was useful to have the current model fresh in my mind to see what has changed for the better in the update.

Apart from the styling changes, which will bring the car in line with the latest A6 and A7 introduced in 2018, the most obvious transformation concerns the extra standard features on the entry-level car. 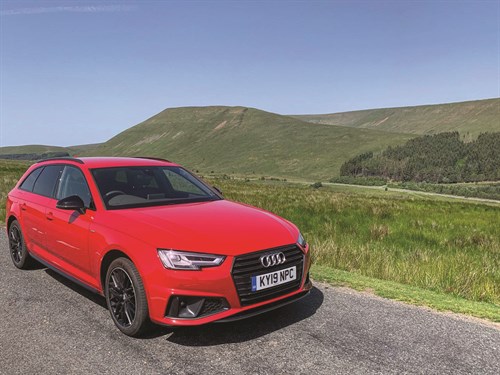 All A4s will soon have the 'virtual cockpit' configurable digital instrument display as standard (part of the optional technology pack on our test car), while the dashboard screen has grown slightly and become a touchscreen display.

This dispenses with Audi's multimedia interface found ahead of the gear selector in our car. The large rotary dial/touchpad and switches are gone, with all their functions now found within the dashboard screen.

Touchscreens are not without dissenters, especially as they require the driver to momentarily take their eyes off the road to focus on the parts of the display they need to touch.

During my few months with the A4, it has been possible to learn the position of the rotary controller and buttons quickly.

Using the functions on a touchscreen while moving might not be so easy, especially as the car's body moves with variations in the road surface.

The other significant change with this version of the car is that the '35 TDI' engine, currently producing 150hp, gets an upgrade to 163hp.

This leaves room in the A4 range to introduce a 30 TDI offering 136hp, putting it on a par with entry-level diesel models of its main rivals.

So, while the new A4 has added appeal, the current version still has a great deal of life left in it.

I needed to get past my doubts about the pros and cons of deleting the A4's standard lowered S Line suspension pretty quickly, as the Volvo V60 I had been running was in need of some TLC.

The A4 had a 7.30am wake-up call from our office and headed for the channel tunnel at Folkestone, with my travelling abroad pack transferred from the V60 to the A4, with V5C and insurance authorisation letter requested (and delivered by email) en route.

It is purely a coincidence that we chose to run the A4 Avant with a short overlap alongside us running the V60, but the cars compete in the same sector, and Volvo will be hoping to steal some fleet customers from Audi. 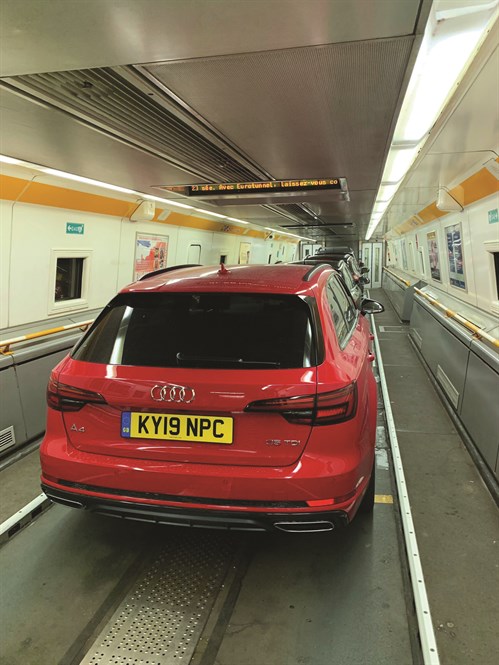 But, as expected, while some of the technology on both cars is similar, there is a different ambience and feel. Audi's S-tronic seven-speed dual-clutch gearbox is usually keener than the eight-speed torque converter auto in the V60, and the interior of the A4 feels a little more driver-focused.

No doubt, if we had gone for the standard Black Edition 19in wheels and S Line chassis settings, the driving experience would be even more acute. Perhaps not so sympathetic towards passengers, though.

However, the car feels sharp enough for me as it is, and as 80% of my driving time is spent on motorways, I don't really yearn for a more engaging drive than the A4 delivers already.

I would say that the Audi's noise intrusion from the engine is a bit better suppressed than in the V60, and although we are 40hp down on the Volvo, fuel economy is substantially improved, regularly exceeding Audi's pessimistic 47.6mpg.

Maybe the smaller wheels (we downsized from the Black edition's standard 19in wheels to 18in as a no-cost option) really do make a difference.

The A4 was well prepared for overseas travel. The technology pack (a £1,395 option) adds Audi's 'virtual cockpit' configurable instrument display screen, which could be switched between mph and kmh via the car's settings.

The camera that picks up speed limits and other warning signs on the road displayed speed limits in the higher numerical value of kmh over mph, but also understands that the car's speed is now shown in kmh, and ensures warnings for exceeding them correspond.

It is easy to search for addresses in other countries using the car's navigation system, and should you prefer one of your smartphone's map apps, Android Auto and Apple Carplay compatibility will also permit this to be displayed on the car's dashboard screen.

The LED headlights (standard on our Black Edition) can also be switched for right-hand traffic to avoid dazzling any oncoming drivers while driving on the right.

So the A4 took its last-minute trip to the Netherlands in its stride and was certainly as comfortable a travelling companion as the V60 would have been.

Late last year Audi offered us an A4 TDI on long-term test. Since the current model is on a run-out strategy before an updated version arrives in the autumn, we were looking at the higher grades, which might have offers supported by Audi to make the car more attractive and ensure that none of the earlier model are left in stock when the revised A4 is in production.

We chose an A4 Avant, with estates becoming increasingly popular in this sector, and went for the 150hp version of the 2.0-litre diesel.

We also looked at the Black Edition based on the most popular S Line version, but with colour-coded black trim, especially where there might otherwise have been chrome trim. 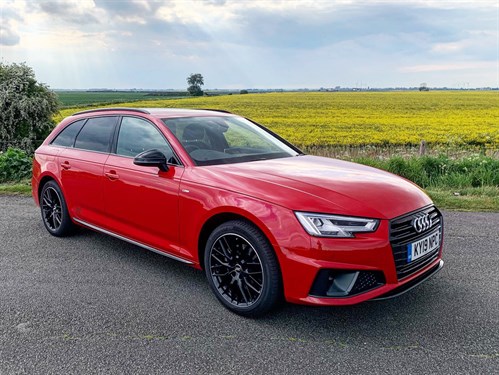 The car isn't black - we chose bright Tango Red metallic paint, which contrasts well with the black parts. Standing out in a subtle way, if that makes sense.

I am a high-mileage driver, probably covering around 40,000 miles a year, so I selected the S-tronic automatic transmission, as around two hours of my commute round trip is in slow-moving motorway traffic.

I also saw the opportunity to downsize the Black Edition wheels from 19in to 18in. Thinking of comfort during my many miles on the road, I felt the ride on the standard 19in wheels might become a little tedious by the end of my journeys, particularly on the uneven fenland roads close to home.

There was also the option of deleting the S Line suspension, which is lowered compared with standard suspension, as well as being firmer. Regarding options, we chose the comfort and sound pack (£1,295), which adds Bang & Olufsen audio, keyless entry, rear-view camera for reversing and a hill-hold assistant.

The technology pack (£1,395) was added at the insistance of Audi UK (they add it to all press demonstrators when optional) and includes a more advanced navigation system, Audi virtual cockpit configurable instrument display and Audi phone box for wireless charging of compatible smartphones.

It all seemed the perfect recipe: a combination of performance, practicality, fuel economy, comfort and sharp looks. It all seemed fine at handover, and the car feels pretty good. It is exactly what I need for my commute, and invariably long trips to work meetings and airports.

It feels relaxed and comfortable, and fuel consumption on my mainly motorway journeys is typically around 50mpg.

But looking at the A4 Avant from a distance, something doesn't seem quite right. Are those wheels too small? How can they be too small? They are 18in, which should be plenty on a car this size.

Perhaps it is the effect of selecting standard suspension, meaning the car is sitting slightly higher on the wheels, which, because they are painted black rather than a standard alloy, seem buried beneath the profile of the car. Please tell me I am wrong.