If I'm honest, the original Juke's kaleidoscope of kinky body panels, bonkers wing-top lighting stack, and motorcycle-inspired interior always felt a bit wacky for my taste. Even so, I know plenty of folks who would vehemently disagree with my aesthetic assessment.

Having driven quite a few Jukes, I was never convinced by an underwhelming driving experience, panel-van noise, vibration and harshness levels, and comparable over-the-shoulder blind spots.

Ultimately, though, my protestations counted for nothing, as the same hordes who dismissed my visual assessments as folly were prepared to put their money where the mouths were, turning the Juke into a stellar seller for Nissan.

Pandemic permitting, that sales success looks likely to continue with the introduction of an all-new Juke, one of which I'll be running for the next six months or so. Buoyed by historic sales success but under increasing pressure from newer rivals such as the Ford Puma and Volkswagen T-Cross, this new Juke will certainly have to be a lot more than just a pretty face.

Obviously, it's easy to recognise the new Juke's heritage, but to my eye, the fresher styling is far more cohesive than the quirky original, and this new design also brings tangible benefits. As well as feeling more spacious overall and generally airier inside, forward visibility is improved thanks to slimmer A-pillars and relocated door-mounted rear-view mirrors. That said, the view through the pillar box slot-sized rear screen remains somewhat sub-optimal, so it's as well that the Tekna+ spec comes with a rear-view camera, which also projects a 360° overhead view to help when parking in tight spaces. 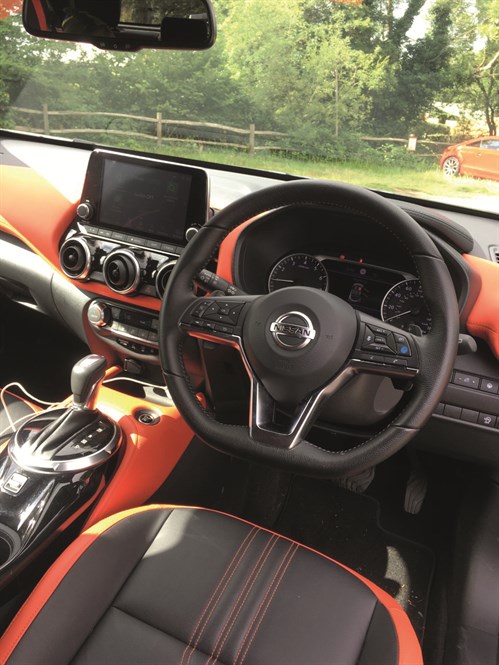 There have also been many detail changes, such as the steering column, which now goes in and out as well as up and down, and resculpted seats to enable more people to find the ideal driving position. Undoubtedly, though, the things that will do most to boost showroom appeal are the improvements in interior quality along with a more sophisticated dashboard design that features bullseye air conditioning vents and Nissan's latest infotainment screen.

The Juke has also received a boost in rear legroom, although the seat cushions are still set quite low, so it remains difficult for little ones to see out through the dinky rear windows. Boot space has grown too, and although it is still more baby buggy friendly than golf club accommodating, there is an adjustable boot floor board, so articles like brollies and wellies can be stored underneath with shopping stacked on top.

On reflection, optioning the acid orange interior trim may have been a bit of an error, but in my defence I specified it before I'd signed up for school run duties. With two fully fledged members of the under-fives wrecking crew inhabiting the rear pews it'll be interesting see just how well the various bits of trim stand up to systematic seat back kicking, torrid toy-tossing, and a general inability to direct food and drink into the requisite orifices.

Power for our Juke comes from Nissan's latest 115hp 1.0-litre three-cylinder. Obviously, it's no ball of fire, but it feels willing, and its official 44.1mpg fuel economy and 116g/km CO2 output place it into a 26% BIK band.

While the latest twin-clutch automatic gearbox linked to the engine is reasonably adept at delivering the performance it does suffer from the odd shunt on upshifts, but that is far from its worst trait. Selecting drive, especially from cold, is a particularly imprecise experience, as there is a prolonged delay before first gear is engaged - if you happen to be parked on an incline the car will start to roll backwards - followed by a significant lurch forward as drive is established. No doubt I will learn to cope with this by employing a dab of left foot braking, but I fear things will be a bit more hit than miss when it comes to swapping from forward to reverse drive while parking. Watch this space.