We take the Skoda Enyaq on a cross-country trip to see just how far its electric range will stretch.

Range anxiety is a term that gets thrown around a lot with electric vehicles. And I will admit that while on our 210-mile journey from Liverpool to York, I probably looked at the remaining miles clock on our Skoda Enyaq every five minutes. But I need not have worried.

The night before our trip, I ensured we had 100% charge in the tank, which equated to 266 miles on the clock. Between myself, my wife, the baby and a few overnight bags there was not much cargo to weigh us down, so I was optimistic that that figure was fairly accurate.

Around 30 minutes into our journey, which included a mix of urban and motorway routes, the battery charge fell by around 10%. This is quite common with electric cars - and even things like your mobile phone. After that, the rate of battery decrease noticeably normalised and I was rather impressed with what we were left with after our first stint. Google Maps put our outward journey at 97 miles. The Enyaq's range fell by 98 miles - which is pretty bang on. It is worth noting that this first 100 miles was achieved through normal, not-so-eco-conscious driving - which is to say that it included 70mph motorway cruising, overtaking and junction darting. The Enyaq's adaptive cruise with traffic sign recognition helped massively here, automatically accelerating and decelerating between speed limit zones to avoid unnecessary surges of battery loss.

Our return journey resulted in slightly different range results. Our 92-mile return journey took 127 miles off the clock - which is quite a big difference. The reason behind this might have been due to leaving York during rush hour traffic - and the surprising amount of uphill driving on the way out of the city. That, combined with the Enyaq's initial 30-minute charge drop-off, perhaps skewed the figures slightly. 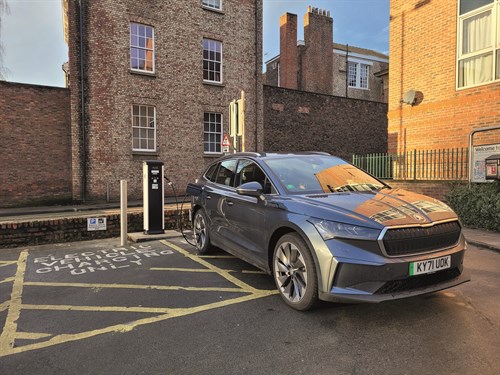 But, aside from a few hills and a bit of stop/start traffic, it was all smooth sailing, right? Not quite. To ensure we had surplus charge for our onward journey the next day, I wanted to plug in at a public charging station for a boost. This proved rather difficult. To my surprise, the actual number of public charging stations was not the issue - we encountered at least two in every single one of the five car parks we used. The issue was that each of them was either in use or broken, the latter being the most frequent issue. Usually, this can be rectified with a quick call to the number printed on the charging station, but not always.

There is also the headache of having to seemingly download a new smartphone app at every charging station you visit, then subsequently create an account and add necessary funds to it.

However, the public charger system is capable of working well. On our second day, we found a 7kW public charger with a low 15p/kWh rate within a car park in the centre of York. While using this charger parking was free, which was a relief given the steep car park fees York infamously carries. So, for five hours of parking it cost us £1.20 in charging fees, instead of costing us £13.50 in parking fees - plus we left with a full battery.

After a long (ish) journey in the Enyaq, I am certainly finding myself looking at the remaining battery less and less, confident in the Enyaq's abilities to stay true to its promised range. However, I feel less confident in the public charger system, and I will certainly make sure that for any future long distance drives I have a plan A, B and C before setting off.

When asked by friends and family what it's like to make the switch to electric vehicle ownership, I likened it to that of first time dog ownership. Before you get to enjoy the fun stuff, there's a lot of careful planning required. Do I get a wallbox charger? Should I reassess my electricity tariff? Do I have to plan daily trips out more strategically?

For that reason, my first write-up on the Enyaq is less about what it's like on the road, and more about its driveway implications.

The Enyaq we are driving is the iV 80, which claims a range of 330 miles, a fairly significant bump up when compared with the 255 mile range of the iV 60 model. In real world driving, however, the iV 80 is expected to return closer to the iV 60's top-end figure of 255 miles.

The initial plan was to drive the Enyaq for a week and plug it in a few times via the included three-pin charging cable to see whether relying on 3kW charging was feasible. After my first seven hour charge recouped just 17% battery capacity, the decision to pull the trigger on buying a 7.3kW wallbox charger was a swift one. And off down the rabbit hole of different wallbox chargers I went.

I ultimately settled on the Project EV Pro Earth charger and opted against the EVHS government grant. This was purely due to the lengthy back and forth involved in obtaining the grant, and the fact that many electricians - who are the ones that have to wait for the grant payment, not you - wouldn't entertain the job. Regardless, this government grant expires March 31 2022. 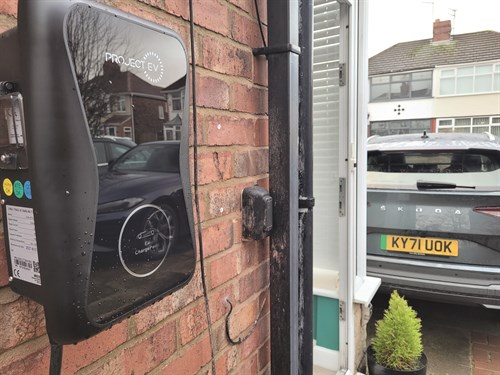 The second big decision I had to make was whether to reevaluate my electricity tariff and hop onto an Economy 7 rate that allows for lower tariffs between the times of 12-7am. The idea here is that you schedule your car charging during said time slot and save money on charging sessions. The caveat, however, is that your standard kWh charge outside of those hours will increase.

After crunching the figures - based on the idea that I would likely require a 40-50% battery top-up twice a week on average - I decided not to go down the Economy 7 route. If you're planning on recouping 50-80% battery charge daily, however - perhaps if you're back and forth to work - I'm almost certain an Economy 7 rating would
be worthwhile.

In terms of experiencing the Enyaq out on the road, after a few trips to the shops, its comfort and spaciousness is what jumps out, with a decent amount of meat to the steering, to match its muscular stance, and you get nice progressive, but strong, acceleration when you put your foot down - unlike some EVs that throw you back in
your seat.

Rear passenger and boot space has instantly impressed too, with lots of legroom for the baby when in his car seat, and a huge boot that excels thanks to its no-nonsense square shape. And I'm glad to say that it's deep enough to swallow the pram lengthways.

Now that I've overcome the necessary set-up period, I'm looking forward to seeing just how far a full charge will get me, how much it will cost me, and how the Enyaq is going to manage on a 300 mile round trip, cross country.