Moving house provides ideal opportunities for getting used to our S-Cross.

When we take on long-term test cars, the basic idea is that we get to find out what they are like away from the road testing environment, dealing with more everyday life tasks. Therefore, the fact I moved house a week after taking delivery of the S-Cross seemed like ideal timing.

From that intro, you might expect this report to be all about practicality, and I can discuss it a bit, since the S-Cross was pressed into service to carry some items that didn't go in the moving van. The model's 430 litre boot is both usefully spacious and well thought-out, and by moving the adjustable boot floor to its lower setting I was able to trade a flat loading lip for the maximum available space. Moving the floor in this way doesn't affect the small divided-off areas either side of the boot either, allowing these to carry small or fragile items and protecting them from the risk of being crushed by larger items in the main load. I didn't need to fold the rear seats down on this occasion, but if I had needed to do this it's a straightforward 60/40 arrangement, although there's no handy remote fold switch by the tailgate like you get in some SUVs and estates, such as Suzuki's own Swace. 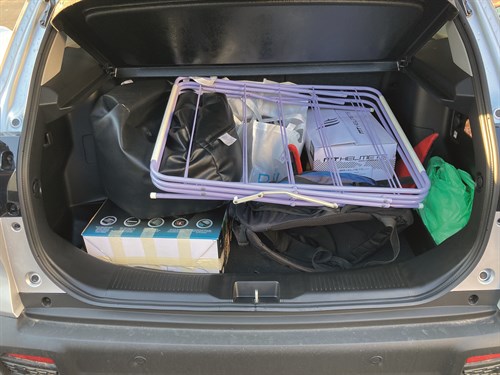 There's also an old-school rigid parcel shelf to grapple with if necessary, rather than a retractable roller arrangement. The S-Cross does however feature two-position rear-seat reclining, meaning if just a smidge of extra boot space is needed they can be popped further upright, at the possible slight expense of comfort for any rear seat passengers.

So, what other elements of a house move play into a long-term report besides the boot? Well, much of the moving experience is not the move itself, but all the little errands and shopping trips around town in the days that follow as a new home gets properly set up. And on that front, I have to report that the S-Cross has been surprisingly joyful to use. Its manner almost puts me in mind of an old Italian supermini - it's not what you'd call a sporty handler, and can roll a bit in corners, but for a family SUV it feels nippy, willing and agile, and more eager than I'd expected at whizzing around industrial estates and supermarket car parks, with the 48V mild hybrid system helping to assist the petrol engine when accelerating. And of course, once you get there, that boot comes into play again to ensure there's plenty of space for your shopping.

One other issue I've had with the S-Cross is possibly not its fault at all, but mine. I've found myself stalling the engine quite regularly, particularly when reversing into uphill parking spaces. It could be that I'm just used to driving my own more powerful manual car and am letting the revs drop too much, but it's not something I've really noticed with other test cars, so I'll be interested to see if I can overcome the problem with more experience of the Suzuki as the test goes on, or if it persists as an annoyance

If one was asked to make a list of car brands with a strong heritage in SUVs, dating from before the explosion in road-biased family car models over the past decade or so, it would be easy to come up with the likes of Land Rover and Jeep. But don't forget about Suzuki. The Japanese manufacturer has been making SUVs since the 1970s, meaning that unlike other manufacturers who have recently jumped on the bandwagon, the brand has a strong heritage in the market, including a big track record in four-wheel drive and therefore proper off-road ability. Top Gear fans may remember a second-hand example being driven across the Amazon rainforest alongside a Range Rover and Toyota Land Cruiser.

Now, don't be confused into thinking the S-Cross, the latest member of our long-term fleet, is the brand's latest full-blown mud plugger - it's very much of the modern family SUV mould. But unlike many of its contemporaries, the S-Cross - the second generation of the model, introduced earlier this year - does retain four-wheel drive availability, meaning there's a bit of substance to go with the chunky styling.

One thing Suzuki certainly can't be accused of is overburdening S-Cross customers with choice. Only one engine is available, a 1.4L, 129hp petrol mild hybrid, and there are only two basic equipment grade and drivetrain combinations - the lower-spec Motion grade comes with front-wheel drive, while the higher-spec Ultra grade specced with our test car gets the aforementioned four-wheel drive system (both also come with a choice of manual or automatic transmission - we have the former).

As well as four-wheel drive, Ultra spec comes with an impressive looking list of standard equipment. Highlights include a 360° camera system, which as well as helping with parking also provides a sweeping look around the vehicle when the ignition is turned on, which while primarily a safety feature also lends a bit of a sense of theatre to proceedings. Other safety systems include blind spot monitoring, lane departure warning and prevention, and rear cross traffic alert. Adaptive cruise control is also standard, while the interior benefits from features such as leather seats and a 9in touchscreen. The only notable omission compared with rivals is a digital instrument cluster, though you do get a fun video game-style live mpg bar on the 4.2in LCD info panel as compensation. Metallic paint is the only option specced, and indeed the only one available.

All in all, it seems like the S-Cross will be a good tool to use for my next six months of motoring, and I'm looking forward to it. There is one note of concern, however. While four-wheel drive is an advantage in off-road or low-traction situations, it does normally have a negative effect on fuel consumption - a major concern for fleets at the best of times, and with prices rising daily at the time of writing, now so more than ever. I'll therefore be very interested to see what sort of real-world mpg figures I record as the miles rack up.