We hit the road on a family holiday and crammed as much luggage as possible into the Suzuki Swace's sizeable boot.

The problem with holidaying in a car is the irresistible urge to take your entire house with you - kitchen sink and all. Thankfully, our Suzuki Swace long term test car was happy to oblige my obsessive compulsive packing.

Although the Swace is very much a hatchback in estate clothing, it definitely exudes estate functionality, with a boot that's deep and has a low load lip. Between topped-off tote bags, prams, camera satchels and holdalls, the Swace was more than accommodating with our luggage. The square footwells in the rear also allowed for a chunky cooler bag or two. And while lifting our one year old in-and-out of his child seat was a little tricky - due to the Swace's low-slung rear seats - there are wide opening rear doors and plenty of space to manoeuvre said child and seat in the back. All in all, the Swace passed the packing test with flying colours.

Our destination was a 250 mile round trip to Center Parcs, with a mix of motorways and B roads. And the Swace's relaxed character was a perfect companion for long journeys. Overall road and wind noise refinement is excellent, the ride is smooth and its sharp steering makes quick lane changes - as well as winding country roads - effortless.

The CVT automatic gearbox, which sits alongside the Swace's 1.8-litre petrol hybrid system, is most at home when sitting in higher gears, and there's plenty of poke when you need to squeeze the accelerator for an overtake. Like a lot of other autos, however, the CVT will bounce the revs under firm braking, leading to the engine letting out an almighty roar. It's nothing to be concerned about, but it's definitely worth keeping in mind if you or a family member is a nervous driver. 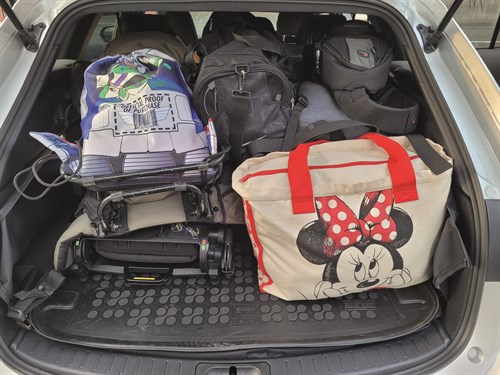 Considering we packed the Swace to the rafters, I was fairly impressed by the average fuel economy we achieved. Our journey was predominantly filled with steady 70mph motorway stints, with no uber-efficient 50mph zones to be found. Yet with what was likely equivalent to a car full of passengers, we achieved a very impressive 58mpg over the entire 250 mile trip. When you consider that the Swace's official consumption figure is quoted at 64.2mpg - 58mpg is pretty astonishing.

To accompany its efficient drive, the Swace has an atttractive interior, which is a pleasure to spend extended periods of time in. There are comfortable, high-backed heated front seats - and a heated steering wheel - great all-round visibility, a straightforward infotainment system, tinted windows to keep the baby sheltered, and arguably most important of all, seamless Android Auto integration.

The Google Maps I ran from my smartphone via USB worked excellently on the Swace's 7in LCD screen, offering all the convenient quirks you get when in handheld mode - like traffic alerts and fastest route updates. The only slight hiccup was my phone's tendency to lose GPS signal and leave us in the lurch for a few miles - and the fact that a passenger can't input a destination on the phone itself, it has to be done via the screen when your phone is connected.

The Swace's hatchback DNA does start to creep in when it comes to cabin practicality. While you do get wireless phone charging built into the centre console, this takes the place of a dedicated storage cubby, leaving you stuffing the two central cup holders with your wallet, keys and loose change. The door bins are a little awkward to use as well, being well-shaped for tall bottles, but not much else. These are relatively small things, however, and something I would be more than willing to put up with in the long run.

1st Report: A Swace up its sleeve

Toyota has been smashing it out of the park in the hybrid arena for some time now, so you can understand Suzuki's enthusiasm for collaborating with them to create some new hybrid-infused family cars - first with the Suzuki Across and now with the Suzuki Swace.

The Swace is essentially a rebadged Toyota Corolla Touring Sports - albeit in an arguably better looking, sleeker package. And while the Corolla is offered in numerous body styles, engines and trims, the Swace is only available in an estate variant, with one engine and two trims.

We've got the plusher of the two Swace variants - the SZ5 - which houses a 1.8-litre petrol hybrid, claiming average economy figures of 64mpg. Within five minutes of driving the Swace, its Toyota influence is fairly obvious, in terms of driving characteristics if nothing else. The Swace is the epitome of an A-to-B family car. It's not particularly exciting, nor does it offer much in the way of personality, but for a hybrid commuter, that's absolutely fine. You'll likely find your driving style stooping to match its sensible demeanour, which tends to be the case when getting behind the wheel of any hybrid.

With my one year old in the back seat and a dog in the boot, I don't mind doddering about. It's a cliche, but the Swace simply wafts along, comfortably, quietly (for the most part) and with a surprising amount of feel through the steering wheel. And while the CVT automatic gearbox vocally alerts you of its presence under harsh acceleration, it's smooth and composed enough when you gently squeeze the accelerator.

So far, after a dozen urban work runs in rush hour, we've managed to get an average of 47mpg, with minimal effort actually, which isn't too shabby.

Of course, with Suzuki's penchant for affordability and hardiness, there is a whiff of cheapness in certain areas of the Swace. It's nothing major, but hollow exterior door handles and a few scratchy interior plastics - hidden among soft touch areas - are some of the first things I noticed. It's certainly more upmarket than budget inside, however, with just the right splashes of sophistication.

After running a Mk8 Volkswagen Golf for six months, and having to wrestle with its temperamental touchscreen, the biggest thing that caught my attention when jumping behind the wheel of the Swace for the first time was its fairly rudimentary, but solid infotainment system.

Typical of a lot of Toyotas, the system in the Swace looks a little dated, with less than exuberant graphics, but it's easy to navigate and just works. The Bluetooth connects instantly, the DAB radio stations are easy to scroll through - as is the phone book - and the built-in Android Auto is faultless. It's too soon to give a verdict on its overall functionality, but first impressions are good.

One clear omission from the Swace's 7in system, however, is a sat-nav, which its Toyota counterpart has, possibly as a flex to differentiate the two. As mentioned, the Android Auto system works great, but when you forget your USB cable or run out of mobile data, having a built-in satnav is always a nice option.

We've got jaunts up and down the country to come in the next few months, so I'm looking forward to seeing what kind of fuel economy the Swace can achieve with some motorway miles, and just how flexible its estate boot really is.