In our second report, we take a good poke around the cabin of our long-term Vauxhall.

2nd Report: Are you sitting comfortably?

Vauxhall describes the SRi trim of the Corsa as a "sporty number". Being one level up from the ground floor that is SE, that means the interior gets a few showy-off touches like alloy-effect sports pedals; a Sport mode button, which is found in front of the gear stick and alters how the steering wheel and accelerator pedal responds, making the car drive in a sporty fashion; and "sports-style" front seats, as opposed to the "comfort" seating offered in the trim below.

Finding a comfortable sitting position won't be a problem for most drivers, as the seat is adjustable for height, can be reclined, and slides backwards and forwards. However, there's no lumbar support, something this occasional sufferer of lower back discomfort would find beneficial. Also, the passenger seat can't be adjusted for height at this trim level - for that extra flexibility you have to specify at least the next trim up, which is Elite Nav. Of course, costs have to be cut somewhere on lower trim levels to justify the step up to the next one, something Vauxhall is not alone in doing in this sector of the market, but not having the same adjustment for both front seats seems unnecessarily mean to me.

I don't feel at all cramped in the front, but I do tend to drive with the seat pushed quite a long way back, which is unfortunate for anyone sat behind me as that really impacts their space - so much so that even my eight-year-old has pointed out how little room she has on the morning school run. However, that particular problem is easily solved, if only I could remember to shift her seat over to the left before the race to the school gates starts. Despite my daughter's opinions, there is room for her and her two siblings to squeeze in the back, or space for two adults to sit comfortably - if I compromise my own legroom. 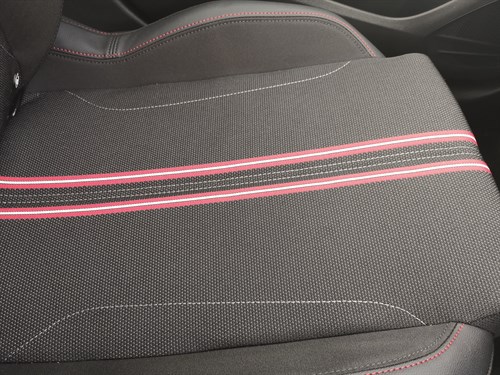 Like the rest of the interior, the seat fabric is largely dark, bar the, for example, red and white stripes and the "Signal Red and Dark Titanium" stitching. That red ties in with a segment of the dashboard that is rather fancily described as a "Liquid Palladium facia with Hot Red accents''. For those wondering what that means, my dictionary tells me that palladium is a rare silvery-white metal resembling platinum and has the chemical element of atomic number 46. In non-scientific terms, the dash is partly silvery grey.

Which brings us to the Corsa cabin in general. We've written before, in a first drive, that the quality "is decent, albeit with a lot of the hard-plastic surfaces that are still found in many small cars", and that "some of the interior fabric designs help inject a little more character". So as well as the streak of horizontal red running along the dash, there are chrome-effect touches dotted around, such as the door handles, while the prevailing black comes in various textures: as perforated speakers, as high gloss around the screens, as cloth roof-lining, in the patterned effect on the top of the dash. Some say that this attempt to make the cabin appear more upmarket is superficial - but in my opinion so is Sydney, and that's still a fun place to hang out.

There are enough storage bins and hollows around the front. They include a glovebox, door bins, small slots in the doors, plus, three mouldings between the seats - two for drinks and one possibly to rest a mobile phone at an angle. There's also a larger space - beneath the 12V power supply, USB slot and aircon controls - where our family currently keeps the hand sanitiser.

Finally, returning to the sporty theme, the SRi model features tinted rear windows and a sporty-looking flat-bottomed leather steering wheel, although the latter is actually standard throughout the range.

1st Report: Corsa comes on board

The Corsa, Vauxhall's biggest-selling car, has joined the Business Car fleet. The latest model went on sale at the end of 2019, and having been subject to one of our First Drive reports at the start of the year it's now time for an extended run.

As the Vauxhall Grandland X/Peugeot 3008 and Crossland X/2008 were signed off before the PSA acquisition of Vauxhall/Opel was completed, it's actually the first all-new model to come out since the takeover. It has also been built on the same platform as the new Peugeot 208, and as such is a close relative (the forthcoming new Vauxhall Mokka/Peugeot 2008 are on the same platform too, as well as the Citroën C4 lower-medium hatchback that's due soon).

We've got the SRi Nav Premium model. The 'SRi' part of that name is the trim, and there are four of those, the others being SE (followed by our sporty SRi), Elite Nav and Ultimate Nav (the latter two, to me at least, sounding like the names you might give to a first-person shooter Xbox games with a military theme). Within the SRi spec, there are four packs available: SRi, SRi Nav, SRi Premium and, at the top, our model, SRi Nav Premium. A similar arrangement is repeated for the SE-spec cars. The more luxurious Elite Nav also comes with an Elite Nav Premium pack, while the Ultimate Nav trim sits alone at the top of the specification pile. 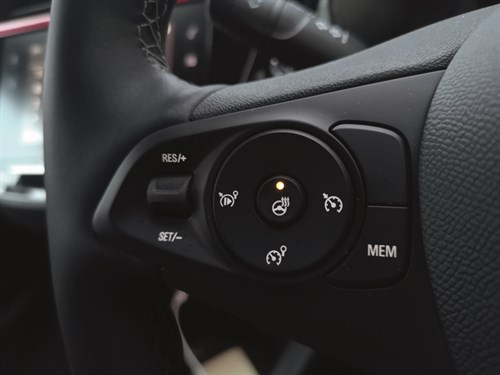 On the outside, the Power Orange two-coat premium paintwork is a £650 option.

Worryingly, we were affected by a couple of electrical glitches very soon after the Corsa's arrival. First up, the vehicle would occasionally fail to respond to the door-opening command from its own key fob, and would only unlock after the boot was lifted and closed again (a fault that I think occurred after not shutting the boot fully on one occasion). Secondly, after clumsily folding in the door mirrors by accident when adjusting the angle via the control, it would take a little while before they could be tilted again once back in their normal position. Thankfully, both glitches seem to have resolved themselves, and the Corsa is functioning as it should - particularly those heated seats and the heated steering wheel, which have just started to come into their own.