The recent petrol and diesel shortages make the full-electric Mokka-E feel like the smartest option more than ever.

It's a topsy-turvy world as I write, when EV drivers can sit relatively pretty while those driving petrol and diesel vehicles suffer range anxiety - wondering where their next fill-up will come from - as UK petrol stations run dry through a lack of HGV drivers to deliver fuel to forecourts. I sincerely hope that by the time of publication, the current fuel shortage will have been resolved - by the army or some other means - but the whole debacle has shone a worrying light on how fragile the UK's fuel distribution network seems to be in late 2021.

And, while right now having a fully-electric vehicle appears to be a better choice than ever, I am resisting feelings of smugness. Because those without off-street parking like me still have to forage for fuel sometimes. Indeed, given the diversity of local charging options available, I've long learned to be strategic and focused when locating chargers and timing plug-ins. My nearest charger is less than 50 metres from my front door, but it is of the lamp-post variety without a designated EV bay marked on the road surface. That means it's effectively just another free parking space, so a car-sized position either in front or behind the lamp post must be secured - which is no easy task on a well-populated residential London street. When you catch the location empty - or sometimes ask a friendly neighbour to swap your vehicle for theirs - the 5kW charging can take a very long time (18-19 hours) to ensure a full charge from almost empty. Still, if you know you're not going to need the car from late afternoon to early the next day - a scenario that is often the case for me as I don't have a daily commute - that length of charge is fine. And it's great to have a plug-in so local with a decent for public charging, 24p per kilowatt/hour via Ubitricity. My last fill-up cost £8.37. 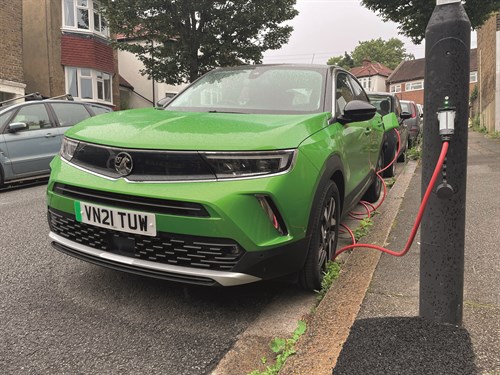 Failing that, two 50kW chargers and one 43kW version, all from the same post, are available within half a mile of my house and do a much quicker job, although that provider (ESB) charges more for the privilege, at 29p per kWh. This site usefully has a designated EV parking bay - but there is only one - and it is well-used by minicabs, and more and limited to a one-hour stay, so depending on how much charge is left before you start, getting to 80% within that 60 minutes is likely to be the max result. Again, timing your run is crucial, but with almost real-time info from Zap-Map's website or indeed the ESB app, it's quite achievable.

One really helpful - but perhaps not always considered - spec detail of the Mokka-E is its generously long recharging cable. Unlike other recent test cars - notably the past two PHEVs I've driven long-term from Citroen and Volvo - the Mokka-E's six-metre-plus cable makes it refreshingly easy to plug in, even if you can't park in the optimal position of fuel flap kerbside and close to the lamp-post charger. To avoid trip hazards, any spare cable length can be tucked between the car's wheelbase while charging and wound into its own carry case when done. The latter process can be a bit fiddly as the case only just swallows the huge and curly cable and the case itself does impinge on the modest 310-litre luggage space somewhat. But, as already mentioned, the boot floor has two height options, so you can either lower the floor for more load height and sit the case on top, or set the floor higher and hide the case underneath for neatness. Either way, the Mokka-E isn't for major load-lugging, Vauxhall has bigger cars and vans for that. And right now, we're super glad it's fully-electric.

First things first: I believe the Mokka-E is quite possibly the most desirable Vauxhall in decades. From its strong design - with that great-looking, visor-like slim face and well-proportioned flanks - to its full-electric powertrain, it's a very appealing package, and one which has much to commend it to businesses too. These strong twin starting assets should translate to a) greater used demand and, therefore, improved higher residual values and lease rates for the fleet manager and b) super-low BIK (1% this tax year, 2% next) plus good-value running costs for the business driver.

At 4,151mm long, 1,791mm wide and 1,531mm high, the Mokka-E sits firmly in the small crossover segment. To give some perspective, that's 41mm longer than the petrol-powered VW T-Cross (4,110mm) and 44mm shorter than the all-electric Kia e-Soul (4,195mm). The Mokka-E's modest length translates to easy city street parking, but its narrower width and lower height also mean a slightly pokey rear passenger space, especially for the head and elbows, which my tall, 5ft 8in road-testing teenage daughters have already vocalised. Still, that is far from a deal breaker for our family of four's normally short-haul needs and quite suitable for those with younger (and shorter) kids, young couples, empty-nesters, or solo business drivers. Boot space ranges from a fairly small 310 litres with seats up to a decent 1,060 litres seats down. The boot floor also has two height options - we've already moved to the lower one.

In metallic Mamba green with a gloss black roof, this particular Mokka-E feels like a real statement to drive too. You rarely lose it in a car park and recently I've found myself waving at other bright green cars on the road - when safe to do so - and have had a 100% positive response rate so far. I don't do that in other cars. Weird habit-forming aside, that green colour is also apposite given the Mokka-E's zero-emission-in-use, eco-aiming, full-electric powertrain. The 136hp (100kW) motor affords instant and linear power from its single-gear automatic transmission. This can be fun and often helpful too, when needing to get away from bunched-up traffic situations for instance. The official 0-60mph is 8.7 seconds, but it feels faster. Using that power is simple. Just put the 'toggle-switch' gear lever into D and go, and if you want more regenerative braking to divert power back into the 50kWh battery, press the separate B button too, situated just behind. For city driving, having the B button pressed down and drive mode set to Eco feels like the best standard option. That way the 201-mile range can be well preserved, and encourages one-pedal, anticipatory cruising mode driving, rather than accelerating fast between traffic lights.

Recharging has been fine so far, and so much more rewarding after each plug-in manoeuvre than with a PHEV's limited returns. No range anxiety has yet been experienced, despite an early 120-mile round trip to Brighton, where the greater concern was the keen neighbourhood parking wardens patrolling the seaside city. Finally, standard kit on the Elite Nav Premium trim is good, with a strong set of safety items (see separate box) and little extra kit specified. Just Premium metallic paint (£650) and IntelliLux Matrix LED headlights with advanced forward lighting (£700) are extras on our model. In summary, I'm genuinely excited at the prospect of driving this Mokka-E in the coming months and looking forward to explaining more about its attributes.