We wonder whether Volkswagen's infotainment system wants to do too much.

Over the past ten years or so, carmakers have been hastily developing in-car entertainment systems to accommodate barrages of new, sophisticated tech. But things seem to have reached a bit of a plateau, with even secondary market competitors able to offer feature-packed touchscreens with seamless active safety features, satnav and Wi-Fi operation. That's why the system in the Mk8 Golf is such a crushing disappointment, as it fails to deliver on the fundamentals, let alone the fanciful.

The latest Golf's pitfalls are well documented, and it's not a stretch to say that the infotainment system in the Mk8 simply wasn't ready to be sent out of the factory. What we get is something that feels like it's still in beta testing. And, unfortunately, it's not just the advanced features that suffer from an unfinished feel.

But let's take a step back for a second - it's not all doom and gloom. The look of the 10in touchscreen matches the Golf's trim and uncomplicated cabin design perfectly. The icons are crisp, clear and smartphone-like, and many of the menus offer a pleasingly simple layout - including the phone and driver data menus. Having visual representations for the driver assist and interior/exterior functions within the settings menu is a nice touch too; clicking a picture of road markings adjusts the lane keep assist and a floating coffee shop button is used to toggle the fatigue monitor. These are both great examples of making nuanced tech easy to understand. 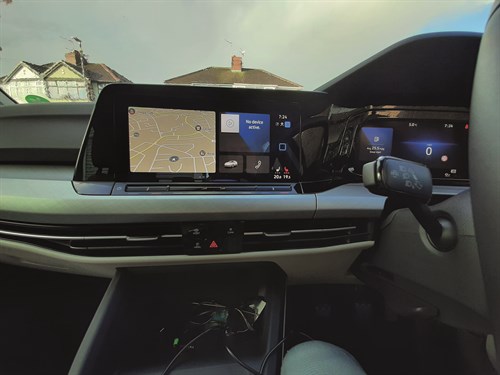 Aside from that, the overarching theme is one of frustration and what seems like general lack of common sense from a development point of view. The screen's menus feel as though they were designed to be used on desktop, with three, four or sometimes five clicks required to achieve what would otherwise be accomplished via a button press or knob turn.

You'll likely find yourself relying on Google to locate certain features hidden within the system - and that includes some of the most basic things, like where the main menu button is (no, I'm not kidding) and how to access the core settings menu to adjust the clock (this took me the best part of a month, and I still had to YouTube it). These features aren't hidden as such, their locations just aren't glaringly obvious. Finding the settings menu, for example, required me to simply swipe down on the main menu in order to access icons I didn't even know existed.

I found myself constantly questioning whether I was overthinking things and wondered whether my previous test car knowhow was hindering me.

A few other nuisances that arise day-to-day is the Bluetooth not connecting properly, the satnav displaying all locations as "off-road", the touch-sensitive temperature and volume controls getting accidentally pressed due to being positioned underneath the screen, and the touchscreen in general taking several seconds to register clicks and swipes.

There are certain menus and personalisation features I'm yet to explore in the Golf, but to be honest, I'm hesitant to. Using the Golf's top level menus is akin to navigating an undomesticated hedge maze, delving deeper would surely present me with multiple dead ends.

I have no doubt that all the features you're ever going to need exist within the Golf's touchscreen. The problem is, no matter how much you attempt to learn its idiosyncrasies, you'll never trump its tendency to just go wobbly. Its software simply isn't good enough.

The humble hatchback has long been an essential part of the new family starter kit, with the word hatchback itself seemingly carrying some sort of limitless, mystical, does-a-bit-everything connotations. But how does that play in the real world?

With an eight-month old baby, a Beagle that constantly needs walking and an activity limiting global pandemic, the past few months has been a constant cycle of supermarket visits and National Trust walks. And to be fair, it's been pretty ideal testing conditions for a hatchback's family credentials. So how has the Golf served us?

Up front, we never seem to be wanting for cubby space. Finding a place for fists full of receipts, chocolate bar wrappers and bottles of water is always easy, thanks to large, strategically-shaped door bins. The door bins are carpet-lined too, which stops things knocking about. The glovebox has enough space for a glasses case or two, and a packet of baby wipes, but you'll likely find yourself solely using the door bins more often than not - or the wide cubby in front of the gearstick.

The two centrally situated grippy cup holders on offer vary in size, with one of them featuring a fancy, flip-out surround to accommodate a variety of different vessels - although it only really tailors to small or large cups and bottles, not medium.

At the rear, the doors open to almost 90 degrees, which is great. The low-ish roofline can make it difficult when it comes to loading and strapping the baby into his car seat, although this is a general inconvenience of pretty much every hatchback, and isn't helped by the fact that our current car seat sits on a booster-like base. 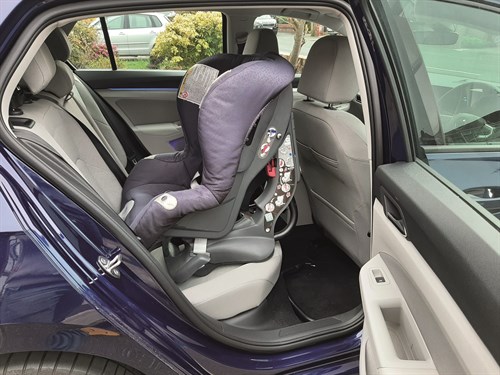 With the car seat in place, there's very little space between it and the front seats, so if you're a six footer, keep this in mind, especially as you'll likely opt for the baby to sit behind the driver so the front passenger can lean back and attend if need be.

The rear of the front seats come with handy pockets in the back of them - one large pocket and two, higher-mounted smaller ones. These are great if you have a forward-facing child seat, as they can be used to store toys.

A quick note on Isofix anchors. I used to think these were absolute essentials when it came to securing a child seat. They're not. While the Golf has Isofix fittings on both rear seats - and indeed some child seats can be secured with said fastenings -we're on our third child seat (one of which had a separating base) and are yet to even look at them. Instead, we strap the seat in via the seat belt, which is quick, easy and secure.

Space and convenience is impressive all-round in the rear of the Golf. There's easily enough head, leg and elbow room for adults. The footwells have enough space for a few shopping bags too. I particularly like the fact that the rear windows stretch slightly past your shoulders, giving a light and airy feel for both adults and kids. Also, while the light upholstery makes for a cosy interior, we've already started to feel the stress of muddy paw prints. Conversely, it hides beige baby food stains quite well.

The 400-litre boot in the Golf swallows most things - including the dog. The main thing you'll have to debate is whether to have the floor lowered or not. When it's flush with the load lip, you get a smooth, unintrusive base. This is particularly handy when loading a pram. However, when you lower it, you get an extra six inches of vertical space, but a bit of a drop. Personally, the lowered floor makes more sense for us - it stops the shopping falling out when unloading and the dog craning her neck when sat upright.

At the moment, the Golf is managing very well. But I can certainly sense its limits. Introduce a flailing toddler and a few bikes into the mix, and I'd be thinking of upgrading to the SUV club.

You don't need us to tell you how popular the Volkswagen Golf is. It's one of those rare things that manages to be ubiquitous and yet cult at the same time. It used to be the only go-to family hatchback that offered brand prestige, solid reliability and Germanic-style luxury at an affordable price. That isn't the case anymore, with everyone from Peugeot to Kia fighting for the same piece of the pie. So, in the modern day adapt or die hatchback market, is the Golf still relevant?

Having recently become a dad, I was excited at the prospect of running the staple family car for an extended period of time. And as our test car came specced in the entry-level Life trim, I was curious to see what a 'cheap' Golf actually has to offer.

The Storm Grey upholstery was a shock - but a welcome one. In my mind's eye, every hatchback has a dark interior with varying amounts of chrome and scratchy plastics. The grey interior of this Golf makes for a much warmer, cosier cabin and it's a wonder why lighter interiors aren't the norm. It works for Volvo.

Volkswagen hasn't pulled any punches on the tech front with the eight-generation Golf. Every example gets an almost buttonless dashboard, with a centrally-mounted 10in touchscreen and a 10in display behind the steering wheel. Between these two screens, the average driver won't want for anything - with a 3D map satnav system, DAB radio, Apple Carplay and Android Auto, parking sensors and adaptive cruise control all included. You even get luxury features like keyless start and 10-colour ambient lighting. Five years ago, you'd have assumed we were talking about an Audi with those specs.

While we do have the Life version of the Golf, there's also a few optional extras fitted, which mostly add to the function rather than the fit of the car. The main attractions are the winter pack and driver's assistance pack. These give the likes of heated seats (and steering wheel) as well as lane keep assist and lane departure warning.

So the Golf has lots of kit to offer, even without the optional extras. Navigating the screen's menus and options, however, is another story. It's far too early to deliver a verdict on the functionality of the touchscreen, but let's just say it's a learning curve, even for a fairly well-versed techy like me.

Those looking for a foot in the door of Golf ownership can choose between either a 1.0-litre TSI or 1.5-litre TSI petrol - each offering six-speed manual and DSG automatic options, as well as mild-hybrid eTSI variants. Our car comes fitted with the 130hp 1.5-litre four-cylinder turbocharged petrol mated to a six-speed manual gearbox. This 1.5 feels a lot like the good ol' 1.2 turbo of yesteryear, with just enough power and smooth, effortless acceleration - although it does require you to rev it if you want to do anything but mosey along.

The mild-mannered 1.5 suits the Golf's persona well though. Like many other small VW-Group cars, the Golf very much feels like it drives itself, which when you're nipping to the shops or checking on the baby in the back seat, isn't such a bad thing at all.

I'm looking forward to seeing how it handles family life in the coming months, especially considering that my son is edging towards the end of his grab-everything, multiple car-seat-requiring first year. But, so far, so Golf.