Our Passat is specified with the illuminating matrix LED headlights option.

LED headlights are becoming increasingly common as standard fitment in cars. Looking back 20 years ago, halogen bulbs were still prevalent, while xenon headlamps were mostly optional on high-end cars. They had a blue tinge, rather than the yellow glow of the halogen bulbs, and were significantly brighter.

I remember going on the media launch of the Vauxhall Vectra estate in 2003, which included a stint of night driving to show off the new bi-xenon headlights, which had xenon bulbs for main beam as well as the dipped headlights. They were extremely bright, and, of course, improved safety when driving on unlit roads at night.

Xenon headlights are now going out of fashion, and are being replaced gradually by LEDs. Due to multiple LEDs within a headlight it's possible to produce illumination even brighter than xenon lamps while using much less energy. That can help contribute to cutting a vehicle's CO2 emissions. In these times of reducing carbon footprints it's one of the reasons why LED has become popular.

A downside of LEDs, though, is that, unlike their lower-tech predecessors, they can't melt the snow that might collect on the headlights because they don't emit any heat.

However, overall, the safety benefits of a brighter beam should outweigh any small problems. 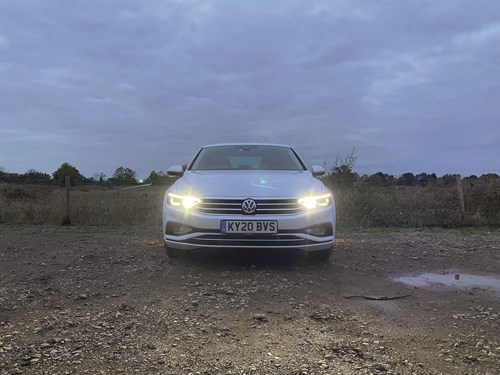 Our Passat has LED headlights as standard, and when choosing the specification we selected the IQ.Light LED Matrix option at a fairly steep £1,700, not forgetting that any increase in a car's P11D value through factory-fitted options also has an impact on BIK tax liability.

But as it's new technology to the Passat, we thought it was worth investigating the benefits, and as the nights have been drawing in during recent weeks we have been able to spend more time using them.

The LED set-up includes front and rear lamps - but at the front it is highly sophisticated when the headlights are in the automatic setting. This enables the automatic function of the main beam, and when selected it reverts to dipped headlights at low speeds - because at low speeds you don't need to see so far ahead - while at higher speeds a new, brighter illumination seems to be unveiled as curtains on a stage reveal a star performer.

The LED main beam shines well ahead, but a sensitive camera located at the top of the windscreen is on the lookout for lights from other road users ahead. Even rear lights several hundred metres away are enough to register, and then something special happens: the main beam remains on, apart from in the immediate vicinity of the vehicle ahead - and this shaded area is dynamic, able to move with oncoming traffic.

It means once the main beam is on at night, in the automatic headlights setting, it never really needs intervention from the driver to cancel it.

You might argue that it reduces the vigilance of the driver if he or she doesn't have to monitor the road ahead for other traffic and ensure the lights are dipped until it passes. But it's surely better that the driver isn't fumbling for the stalk at night and hoping to dip the headlights correctly the first time.

A few weeks into more frequent night driving, I'm quite used to them, and they have been effective enough not to incur the wrath of oncoming drivers with an angry flash of their lights to prompt action to stop dazzling them.

When we chose our Passat, we had the option of going for the more expensive PHEV version, and it's something we did consider for a while before plumping for the diesel.

That disappeared a couple of years ago, and while the SMMT was initially concerned that it might put a dent in the sales of alternative-fuel vehicles in the UK, the more favourable company car tax status of plug-in hybrids and the latest battery technology are driving extra sales.

However, our 150hp diesel Passat saloon has a P11D value of £31,435 for the standard SEL with optional DSG auto transmission. The entry-level Passat GTE plug-in hybrid is priced at £36,735 for the same 2020 model-year car as ours, so for it to be cheaper for a fleet to run that £5,000 price premium needs to be offset through lower running costs.

The plug-in hybrid has a higher residual value percentage, according to our data from KeeResources, at 32.6% compared with 30.5% for the diesel.

However, that higher P11D value still means the GTE loses more cash to depreciation over three years/60,000 miles, at 41.3p per mile compared with 36.4p per mile for the diesel. 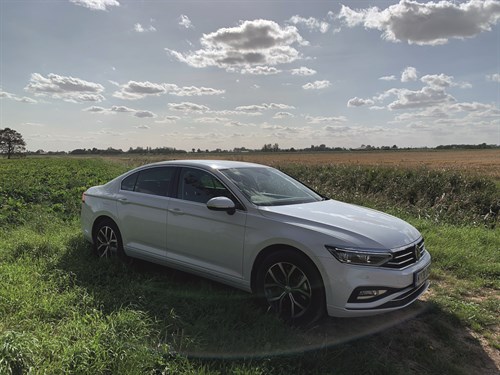 The three running cost figures combined give the diesel a 2.5p per mile advantage over the GTE, although the fuel element is a variable. The official combined fuel consumption figure for the Passat is 53.3mpg and I'm routinely achieving 15% better than this, and even more on long motorway journeys. And I haven't even deployed the 'eco' driving setting yet.

Likewise for the GTE. If it's charged regularly and used mainly on short journeys its fuel costs will be even less than quoted. But if the driver has chosen it purely to avoid company car tax, and doesn't really care about plugging it in, then fuel will cost significantly higher than for the diesel.

The Passat TDI attracts Class 1A National Insurance of £1,432 in 2020-21, thanks to its 33% BIK tax bracket (Volkswagen is now rolling out RDE2-compliant diesel versions of the Passat that would see this go down a little), while the GTE is just £507.

Company car tax for a higher-rate taxpayer in the diesel is around £346 a month for 2020-21, compared with around £122 a month for the GTE. So we can see the appeal of the plug-in hybrid to the driver.

But so far I have enjoyed the convenience of the diesel and the exceptional fuel consumption. With 2,500 miles on the clock I'll be taking the Passat this evening for only its third refuelling stop in seven weeks. No plugs and no waiting.

The upper-medium sector was once the heart of the fleet arena. In the era of the Ford Cortina and Vauxhall Cavalier, this was how company sales reps were put on the road, and one-upmanship could be found in engine size and the length of the equipment grade badge.

Now, in the era of the Ford Mondeo and Vauxhall Insignia, these cars have annual sales typically in four figures rather than five, but while the names might have changed for two of the biggest brands in the fleet sector, Volkswagen's Passat is a mainstay.

The Passat was launched in 1973, before the iconic Volkswagen Golf, and the name must resonate in a way that the Cortina or Cavalier didn't because it's still here.

The reason sales in the upper-medium segment, or D-sector, have diminished is because of the increased appeal of SUVs and premium-badge models. Even within the Volkswagen range, there is a model above the Passat - the Arteon - to try to compete with premium-badge rivals such as the BMW 4 Series Gran Coupé and Audi A5 Sportback.

And Volkswagen has decided to offer the more upmarket sibling in an estate as well as the four-door fastback from the soon-to-be-launched facelifted version.

While the upper-medium sector has lost some of its importance to user-choosers, it's a shrinking pool of talented cars.

The Skoda Superb has been a winner in this category in the Business Car Awards for the past few years, and, sharing much of its technology with the Volkswagen, the Passat must have its work cut out for recognition. 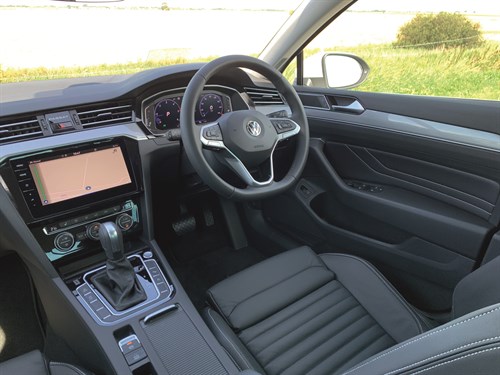 So why did we choose it? The Passat is still a strong seller in this sector - with sales similar to the Vauxhall Insignia, and dwarfing the volume of rivals such as the Ford Mondeo, Peugeot 508, Mazda6 and the Skoda Superb.

And we chose the latest version of Volkswagen's 2.0-litre diesel engine, despite all the negative associations with diesel in the mainstream media, which seems to be rubbing off on the behaviour of private car buyers.

With 150hp, and the DSG automatic, the Passat saloon just hits 130g/km, which is still a threshold for many fleets choosing ICE vehicles.

The Passat GTE would offer lower BIK tax, but policing charging is still difficult for fleet operators, and drivers still need the discipline to ensure they don't rely only on the vehicle's petrol engine.

Out Passat's official fuel consumption figure of 62.8mpg might impress under WLTP, but I've achieved as high as 76.0mpg according to the trip computer so far, and I'll verify what it's capable of at the next round of refuelling.

Our SEL might lack some of the presence of the R-Line, but it has smaller wheels and a more compliant suspension. Leather seats come as standard, as does satellite navigation and adaptive cruise control.

We've ticked a few extra boxes that perhaps show a user-chooser in a premium-badge car what they are missing for the money.