In contrast to a segment defined by a car that went wild with its design - the mk1 Nissan Juke in case you wondered - and which spawned many followers created with similarly 'busy' aesthetics (Hyundai Kona, DS3 Crossback), the designers of the late-coming T-Cross opted for pleasingly chunky proportions and uncomplicated details.

How so? Well, compared to its own bigger VW SUV siblings the T-Cross has a shorter nose, less glass in relation to its body and a more upright (although still forward-angled) thick rear pillar, all of which contribute to the Tonka Toy 4x4 vibes (despite the T-Cross's front-wheel drive reality). 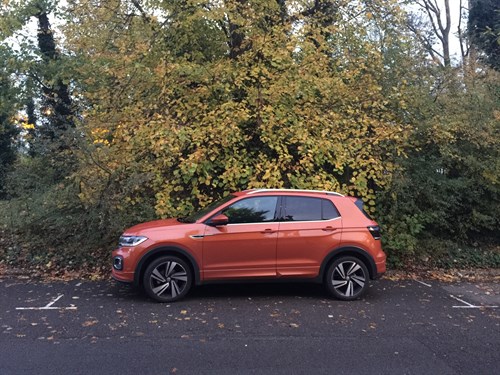 The few horizontal lines that break up that large body side visually pull the car together from the chrome arrow detail behind the front wheel right back to the rear light. 18" alloy wheels fill their arches suitably and the whole ensemble coheres.

In simple terms it doesn't look weird or jar from any angle. It's a restrained design - as VW's best cars historically have been - but far from dull or humdrum, as arguably its bigger SUVs in their later generations have become (Tiguan and Touareg we're looking at you).

The only practical design downside of this chunky exterior is a restricted rear three-quarter view from the inside caused by the wide rear pillar, which can make some reversing manoeuvres trickier, or joining bigger roads from diagonally-attached smaller ones slightly harder. But overall it's no safety deal-breaker, just something to be aware of and adjust to.

The 'Energetic Orange' paint job on our car - a £575 option we'd be happy to pay - complements the T-Cross's bodywork well and is a left-field and much less obvious choice than silver, navy or black. So far, we've only seen one other T-Cross so attired on the road, but even when alongside each other in dual-lane static traffic, the other driver steadfastly refused to make eye contact.

Like two people at a ball ending up shoulder to shoulder in the same outfit, maybe that's understandable. No worries, I still feel special driving it.


The massive waft of fresh air and roar of road noise as our T-Cross traversed a section of adverse camber told me something serious was up a split-second before the sight of the front passenger side door swinging open on the move confirmed as much.

On several occasions - and something I've experienced as both driver and passenger - the front door on the passenger side has appeared to shut and hold in the shut position long enough to falsely reassure, only to fly open rather unsettlingly on the move, usually when the angle of the road was working with the natural gravity of the door's hinge mechanism. 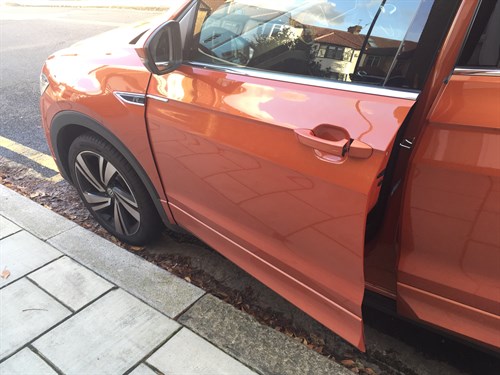 All the passengers involved have managed to grab the door handle before it opened fully and threatened to hit anything else we were passing, but it's fair to say the situation was not ideal.

Having established that their was a knack to closing the knacked door, we then asked future passengers to make sure the exterior door handle was fully pushed back into the door before pulling the door itself shut from the inside.

Ringing up VW's press fleet to resolve we quickly gained a similarly orange and 1.0-litre petrol-powered T-Cross while our main car was fixed.

The replacement car was a slightly lower-spec SEL but its pricier seven-speed 'DSG' direct-shift gearbox brought it to within £30 of our manual in plusher R Line, so was interesting to compare. Although the auto takes the chore of manually changing gears away and registers a slightly lower CO2 and BIK band rating (112 and 25% vs 116g/km and 27%) its mpg range is lower (36.1-44.7 vs. 37.3-45.6) and it didn't appear so much smoother as to warrant a trim downgrade to absorb its extra cost over the manual.

A week later the old manual car is back, and handle fixed. The problem? "Caused by movement in the outer handle, which in turn was causing it to catch on the stop and therefore preventing it from returning fully," said the workshop via the official spokesperson, although they couldn't ascertain what caused it to happen in the first place. Either way, the door now shuts like a dream. Case (and door) hopefully closed.

In the world of pint-pot sized supermini SUVs, the VW T-Cross is one of the most pleasingly rational and uncomplicated.

Well-proportioned, and chunky in stance, it looks and feels like a Tonka toy truck ready for action and 50% of its sales will likely find business-related homes, thus its inclusion on our fleet for the next half a year or so.

Joining the segment started by the Nissan Juke - but which in its latest iteration is nearer to the market occupied by the VW T-Roc one SUV size up - closer rivals for the 4108mm long, 1756mm wide and 1559mm high T-Cross now include the DS3 Crossback, Kia Stonic and Citroen C3 Aircross. 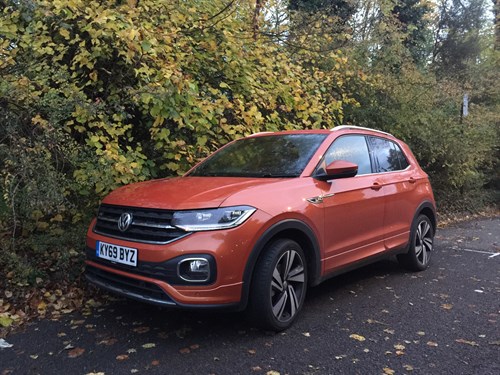 The T-Cross is a practical little car for its size, able to carry four people easily and five for shorter journeys and it's simple to slot into small city parking spaces. 385-455 litres of boot space is available 'seats up' due to its slidable rear bench and that space is easily accessed via a wide and large-aperture hatch.

Need more space again and the rear seats fold flat to create 1281 litres and allow the T-Cross to swallow surprisingly large loads. Already an array of bulky furniture has been moved around without fuss in a way which would have been impossible in our previous Honda Civic four-door saloon test car.
Our T-Cross has a 1.0 TSI 115hp petrol version under its bonnet mated to a six-speed manual gearbox offering an official combined consumption of 45.6mpg and a 116g/km CO2 rating, equating to a 27% BIK band.

The unit has a typical signature three-cylinder thrum and revs need to be kept up to make progress - especially when starting from cold and on inclines - but it's absolutely fine once the mental adjustment has been made.

Remaining mainly in the city in these early days it's not had a chance to stretch its legs much and our first fill has recorded a strictly urban 32.4mpg (although that compares closely enough to the now more realistic WLTP official 'low' figure of 37.3mpg).
The best-selling trim in the UK is expected to be the mid-range SE, but we're in a top-end R-Line version which has a great amount of kit for such a small car, including a colour TFT digital driver display (which can show maps as well) plus Apple Carplay and a host of safety features.

Most of the latter are very helpful, except lane assist which gets upset too often by minor excursions across the central dotted lines on narrow roads (we've turned it off) and city emergency braking which gets too easily spooked by centrally-located bollards, parked cars and more.

Beyond that, our test vehicle has about £1,600 of extras added - including the fetching Energetic Orange paint (£575) which is fitting in nicely with the autumnal leaves and a Beats sound pack inc. 8-channel digital amplifier, subwoofer, 300 watt output and six speakers (£430) which we've yet to fully crank up.

That makes the car a £25k vehicle, and so far, just one month in, first impressions are mainly good. The only blot on its copy book is a passenger-side door which sometimes pretends to be shut but isn't.

On several occasions it has swung open on the move rather unsettlingly. We'll be seeking to get that resolved very soon and will divulge our results in next month's report.