We're enjoying driving the Volvo XC40 a lot, but getting it regularly juiced in the city can be a hassle.

Obtaining an electric charge without off-street parking was always going to be one of the big challenges of this six-month test, but as I said in my previous report a valid one, given how electric and part-electric motoring is being pushed to city dwellers as a way of reducing local air pollution. The process should be more straightforward than in previous years because two on-street chargers have been installed close to my London house, one with a proper designated bay and the other within a street lamp post.

The latter option is much nearer and avoids major main roads, and although it does not have its own electric vehicle bay markings outlined on the street, I'm already organising parking place swaps when I need to recharge as I happen to know most of my neighbours and the cars they drive. Longer-term, as these lamp post chargers proliferate - because they are cheaper and easier to install and require less planning and street disruption - seizing such spots should hopefully become easier. Right now, they're anything but.

Maybe it's partly because of lockdown-related restrictions - many more roads are temporarily being narrowed or closed to through traffic - or indeed less work meaning fewer reasons to drive, but people seem to be driving less in the capital, and when they need to, they're finding it harder to do so. On my empirical evidence only there seem to be a lot of semi-abandoned cars in my area left by people from elsewhere. Not permanently - they're not old bangers. I've checked a few number plates online and they're taxed - for now. Consequently, my nearest charging space has been occupied by a non-moving Ford Focus for at least a month. The few times I've managed to swap with a neighbour to the car space nearest to that bay, I have just about got the cable to stretch diagonally across to the front passenger side of the XC40 where the car's socket resides (see picture, below). But that's a lot of trouble for circa 25 miles of electric range compared to hundreds of petrol miles in minutes from a regular fuel station. 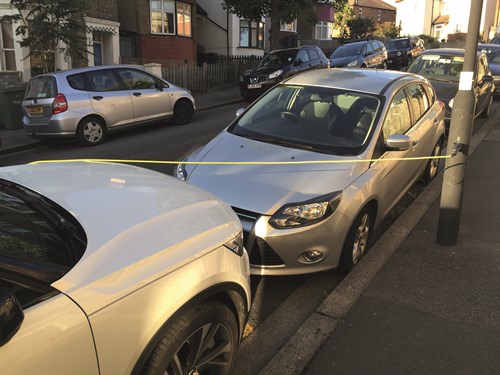 Further afield, the lamp post charging story is similar. Non-EV or PHEV cars are almost always parked in the EV charging spaces. To be fair to those drivers, there's often no signage on the lamp post to indicate it's available for EV charging or only a tiny sign if there is. And with no bay markings on the floor and in a city where free on-street parking is at a premium, who can blame them? It's just frustrating and gives the lie to the seemingly bountiful inner-city free charging options, indicated as available by the likes of Zap-Map, but in reality inaccessible. On other occasions further afield, half a dozen notional charging stations were listed just where I wanted to be, but ended up variously within an expensive car park, inaccessible due to a closed road, or on a part of the street restricted to buses, taxis and cycles. After 30 minutes going round in circles, I ended up finding none I could actually plug into. So I parked on a single yellow line, as it was a bank holiday (and carried on using petrol).

On longer drives - and I've done plenty of them too - leaving the gear selector in B+ rather then D to boost regenerative braking, up to 10 electric 'bonus miles' can be gained over 100 miles or so of driving. That's good and has allowed me to adopt a 'one-pedal' EV approach for much of the time, coasting up to traffic lights and junctions and barely having to dab the actual brake pedal. It still feels great to silently start journeys in electric mode, but I'd like to make more of my miles electric ones. I'm going to redouble my efforts.

In the world of compact SUVs almost every mainstream and premium brand is now represented. But among the two dozen-plus models available the Volvo XC40 is still one of the standout designs on account of its chunky and angular creases, most recognisable at a glance in the diagonal section of the rear door window line. At 4,425mm long, 1,910mm wide and 1,658mm high, the XC40 is longer than the Jaguar E-Pace (4,411mm) and shorter than the BMW X1 (4,447mm).

There's Swedish design rationalism evident in the solid and safe-looking exterior shapes, plus restrained sophistication in the simple minimal-button interior accented by the concave-shaped and metallic rectangular-pattern filets running through the dashboard and interior door panels. The car does have shiny bits but they aren't too big or numerous. They don't shout 'look at me' but they're noticeable. Passenger space front and back feels decent and  materials are quietly upmarket, while the boot space ranges from an OK 460 litres with the seats up to a large 1,336 litres seats down, when luggage is packed up to the ceiling.

Offering a plug-in hybrid variant reduces the competition further. The front-wheel drive XC40's T5 Recharge only employs a three-cylinder 1.5-litre petrol engine but offers 180hp plus another 82hp from the electric motor, which is plenty enough for smooth sailing. When swifter getaways are required it can also record 0-62mph in 7.3 seconds. That calm feeling of progress starts from start-up. There's no diesel rattle or petrol thrum - just a slight electric 'wheee' sound once the automatic gearbox selector is put into Drive. Volvo claims 26-28 miles of electric-only range (based on the WLTP cycle) but from the few plug-ins we've done so far no more than 24 miles have been obtained in any one session, which usually takes about 2.5 to three hours. 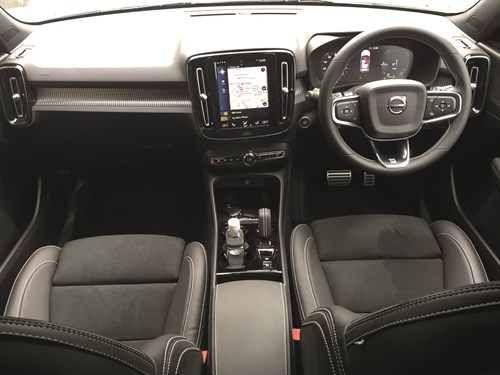 Obtaining those electric miles without off-street parking is going to be one of the challenges of this six-month test, but a valid one given how electric and part-electric motoring is being promoted to city dwellers as a way of reducing local air pollution. The process should at least be more straightforward than in previous years. Case in point: within the past 12 months two on-street chargers have been installed within a few hundred yards of my house, which is in London - one with a proper designated bay (and rapid-charge options for full EVs) and the other a quick-fix lamp post plug type. On longer drives - and by leaving the car in B rather then simply D, regenerative braking is greater and can gain up to 10 electric 'bonus miles' over 100 miles of driving.

Tax is a significant factor in any PHEV purchase and the XC40 Recharge records an official combined consumption of 118-135mpg and a 47-55g/km CO2 rating, equating to a usefully low 12% BIK band. How many times we manage to recharge will determine how close we get to that mpg range figure of course, but the BIK band is in the bag for this year and only rises to 13% next tax year and 14% in 2022/23.

Standard safety kit is well above average, as you'd hope for a brand so associated with avoiding or mitigating crashes, but a lot of other items are extra, even on our middle-to-top trim R-Design Pro, from Apple Carplay integration to a rear parking camera. Our test vehicle has a significant £3,825 of extras added - including more great safety features and some convenience ones too, like an electric-closing rear hatch - but still no front parking sensors. All in all though, the XC40 PHEV feels like a lot of car to talk about. We'll be looking forward to doing just that over the next half-year.