Frequent charging of the XC60 means the petrol engine has had some time off.

In March, I bit the bullet and had an electric car charging point installed. I don't own a plug-in car - my own cars to date have been very much from an analogue age - but with using cars like the plug-in hybrid Volvo, as well as the frequency of having cars such as the Mustang Mach-E and Polestar 2 on test at home, I wouldn't really be doing our readers justice if I didn't utilise the cars as an owner might and a company car user should.

Now, when the Volvo is parked outside and I know the charge is depleted - easy to check the charge status using the Volvo On Call app - I plug it in for a few hours so I know there'll be around 20-25 miles of zero-emissions running available for its next journey.

I had a business journey at the end of March that was considerably longer than a full charge. The drive was close to 50 miles and I sent the directions from the map in the Volvo app to the car.

There was an on-screen alert for the destination when I switched on the ignition and I selected the route. As 'hybrid' mode is the default setting, the XC60 then deployed its electricity as it saw fit throughout the route.

Passing through towns and villages en route, the electric motor was usually working alone. The engine worked in harmony with it on some of the faster roads, and by the time I arrived in Leicester, my destination, there was still around four miles of battery range left to keep running on zero emissions while in the city.

Since then, I have been mostly doing local journeys and remembering to keep the XC60 charged. For the past seven days, at the time of writing, I've covered around 58 miles, including its first full refuelling trip, and managed to spend more than two-thirds of the time running on electric.

It has meant that after a lacklustre start when the car spent its first 600 or so miles being run in by Volvo before delivery to us, and was typically showing 32mpg as the average fuel consumption, it's creeping ever closer to the official figure set on the WLTP.

The only problem is, it will be difficult to calculate the actual cost. The petrol will be no problem, working out the cost of the fuel used over the mileage between refills, but the additional costs on my domestic electricity bill during the same period will be harder to determine.

Of course, fleets can rely on running cost providers to give them a ballpark pence-per-mile figure based on WLTP, but any variance from that - and most users will not achieve the official figure - makes costs less predictable.

I will most likely reevaluate my domestic electricity provider in any case, as taking significant power every few days to charge the car's battery will mount up over a quarterly bill period, offset, of course, by fewer refuelling visits. Charging is still cheaper than refuelling.

But the best advice I can give for now is charge as much as you can from a domestic or office supply, and that should result in lower costs than petrol or diesel alternatives.

1st Report: A Volvo for vegetarians?

Sustainability is a buzzword for many organisations. Almost all businesses have it high on the agenda, whether it's our own internal policies or even making a difference to which tenders we select, there is a general acceptance that we need to do more to reduce our impact on the planet.

Following a vegetarian lifestyle - and especially a vegan lifestyle - is said to be a major factor in improving sustainability, as instead of growing huge volume of grain to feed the animals farmed for human consumption, we use the space (and it would be far less space in this scenario) to grow food for humans.

Of course, we couldn't have leather shoes, belts and other clothing without farming cattle and using the hides. But there is a growing interest in alternatives that don't involve slaughtering animals, and many can be found in the premium automotive brands.

Mercedes-Benz has long offered Artico synthetic leather, initially as a less expensive alternative to leather seat trim, but increasingly as a lifestyle choice.

Jaguar Land Rover has also invested a great deal of money in developing suitable alternatives to leather and the number of non-leather options is growing.

Years ago, it would have been much harder to sell a used example of a premium car without leather seat trim specified, so much so that it appeared as standard on the majority of derivatives.

But now the lines are more blurred. There is a niche in the market for those who don't want genuine leather trim and the alternatives are desirable. 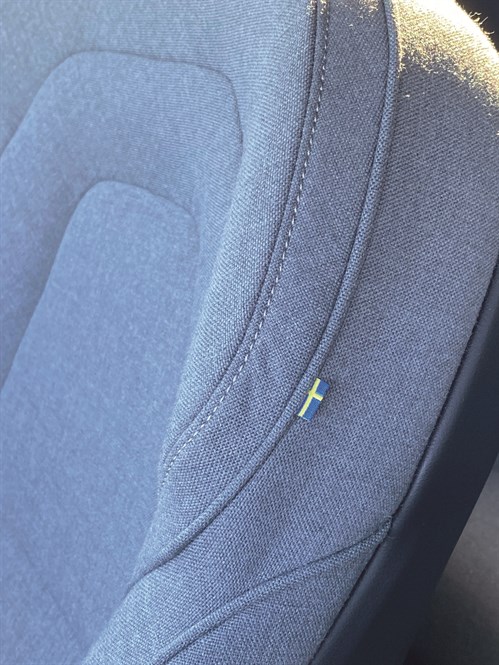 We chose this option on our Volvo XC60 long-term test car, which offered wool blend cloth seats as well as a synthetic leather-wrapped steering wheel. Not a vegan-approved choice, but a step into vegetarian territory.

The sculpted seats in our Inscription grade XC60 look super and provide the level of comfort we have come to expect from Volvo.

We've also chosen a few option packs to help with comfort, safety and convenience, as well as the electronically controlled air suspension.

The Recharge T6 is new for the 2021 model year, and offers a less expensive and less powerful alternative to the Recharge T8 plug-in hybrid.

It has a 253hp turbocharged 2.0-litre petrol engine with an 87hp boost from an electric motor. It also comes with all-wheel drive.

As the XC60 is now in the twilight years of its life cycle, the CO2 emissions and range are not enough to give it best-in class status. But it's certainly a more tax-efficient option than the diesel version for company car drivers, and given that the pandemic has changed our behaviour and reduced average business mileage, I'll be keen to see how many fully electric miles I can travel in it over the next few months.