The Vauxhall Insignia has long been a fleet stalwart. Richard Bush finds out how the latest version stacks up. 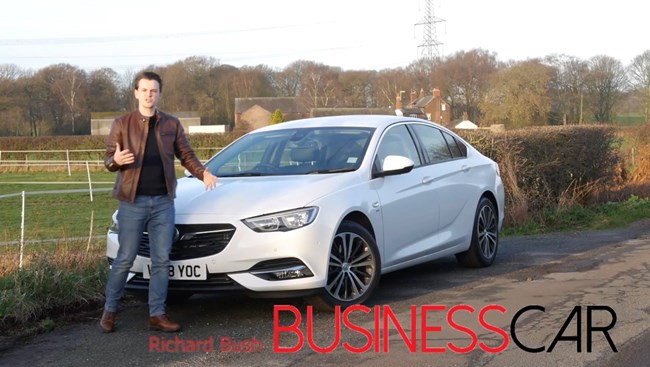 With the Insignia, Vauxhall has already nailed the formula for an attractive motorway cruiser. But for the latest iteration of the family hatch, Vauxhall hopes to broaden its appeal, with a greater focus on interior quality and luxury, which will hopefully make fans of the Ford Mondeo, Skoda Superb - and possibly even the Audi A4 - think twice.

A much improved interior

The cabin of the previous Insignia was somewhat plagued by a clutter of buttons and switches, but thankfully, that has been fixed. Gone is the confusing layout, and instead the dashboard is dominated by a slick touchscreen system with but a few vital controls below it. As with the previous model, there is tons of adjustment in the driver's seat.

As standard, a 7in screen is fitted, but sat nav variants get a larger 8in screen. Other standard kit featured on entry-level Design models includes Bluetooth, DAB radio, cruise control with a speed limiter, air con, Apple CarPlay and Android Auto.

Vauxhall's OnStar system comes fitted as standard too, allowing for in-car wifi hotspot and a series of advice-focussed features. For example, you can call an OnStar representative and have them programme directions into your sat-nav.

Another huge interior improvement is the quality of the materials used, with soft touch finishes now littered around the cabin. They're not as spongy as the ones you'd find in a BMW 3 Series, but they easily match similar models from the likes of Skoda.

The SRi Nav model we tested adds a few luxuries like sat-nav (and the subsequent larger eight-inch screen), sports seats and two USB charging ports in the rear. Realistically, if you want to retain the Insignia's value for money, you'll stick to the lower trims - with even the second kit level up, Design Nav, delivering plentiful equipment.

In the rear, the Insignia continues to offer masses of legroom, which makes it feel more like a car in the segment above. However, headroom is still a little sparse, due to the steep sloping roof, so six footers will find themselves slouching to avoid ruining their hair.

Boot space is still a little behind the leaders of the pack, and its large load lip and lack of an adjustable boot floor mean it's not as intuitive. But with 590 litres with the seats in place and 1,580 litres with the seats down, it's still a huge space to play around with. And even standard models get the lever-activated, auto-folding seats - something omitted from many of its larger, more expensive rivals.

Grand Sport by name, not by nature

As with many fleet-focussed vehicles, the Insignia has several attractive engine variants on offer. We tested the 2.0-litre 170hp Turbo D diesel, which has plenty of low down pull and cruises effortlessly on the motorway. However, with CO2 of 141g/km, it's respective tax bracket isn't as appealing as those offered by the 1.6-litre diesels in the range - of which offer more than adequate performance.

Regardless of which engine you choose, the Insignia feels at home on the motorway, with minimal wind noise, responsive steering and a very comfortable driving position. The latest Insignia is slightly more adept on country roads, too. It's not what we'd call fun, but grip is plentiful and the steering is responsive enough to give you confidence in the bends.

The Vauxhall Insignia Grand Sport - when choosing the right specification - could be the perfect car for a high-mileage driver, with enough comfort and spec to while away the long journeys, and with attractive running costs for fleets.

Data correct at the time of evaluation.