We try the front-wheel drive version of the Vauxhall Grandland X, which is more tax-efficient than the 4WD variant. 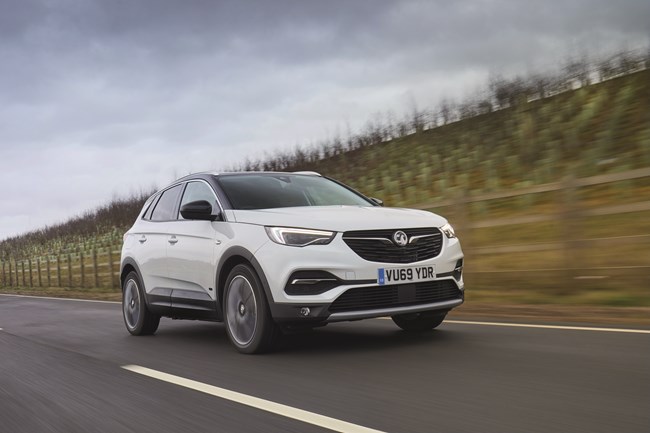 Some Vauxhall models are now subject to French influence, following deals struck to use PSA architecture as a base for several new cars a few years ago, which was then followed by PSA's acquisition of Opel and Vauxhall.

But if Peugeot's and Citroen's latest releases are anything to go by, that's a big positive. Take the excellent Peugeot 3008 - the epitome of a solid, nice to drive, nice to look at, practical family car. Why is that important? Well, with fresh bodywork and an Opel/Vauxhall interior, you've got the Grandland X. Sort of.

The Hybrid version is mechanically identical to the 3008 and Citroën C5 Aircross with electrified power.

Vauxhall interiors have tended to be clear and uncluttered in recent years, lacking in showboating digital gimmicks, and the Grandland X Hybrid is no different. In other words, it's happy days if you're after a familiar Vauxhall feel. If you're seeking an alternative avenue into funky, concept styling, you may be disappointed.

In our Business Edition Nav model an 8in touchscreen takes centre stage and houses all the key functions, with a thin strip of climate control buttons underneath. The Intellilink touchscreen system can be a little laggy at times, but its simple, logically laid out menus make up for it.

The equipment grades can be a bit confusing in the Grandland X, but there is a clear signal to company car drivers that Vauxhall knows this audience.

The Business Edition version of the Grandland X Hybrid offers kit comparable to that of the much pricier SRi Nav grade, so you essentially get the same car with a post-discount price, and a lower P11D value contributing to lower BIK tax.

The Grandland X doesn't disappoint when it comes to practicality, and while it might not bowl anyone over when it comes to storage, it ticks most of the key boxes up front, in the rear and in the boot.

Rear passenger space is excellent when it comes to head and legroom, provided you're not in the middle. The concave roof provides a nice pocket of head space and there's enough knee room to slouch back in your seat. The middle seat is better reserved for kids due to the slightly intrusive centre console that stretches back, but moving around in the back is still relatively easy to do.

The boot is by no means the biggest in class on paper (in part because it's hiding the hybrid hardware beneath), offering 390 and 1,528 litres of space with the seats up and down respectively, but it certainly doesn't feel like it's lacking. Its square layout, power-folding rear
seats (folded via levers in the boot) and tiny load lip make lifting and storing prams, heavy shopping bags and long objects like camera tripods, a breeze.

The seats don't fold down completely flat, but one thing we were really impressed with was the accommodating powered tailgate, which requires a very small amount of space behind the car (about a foot) to open.

Whether it's short urban cruising or motorway jaunts, the Grandland X is lovely to drive. It's quiet, comfortable and enjoyable in its own way. It can be a little fidgety over potholed roads, and the steering is on the light side, but if you're driving your family around, do you really care?

The characteristics of the hybrid variant align perfectly with its nonchalant persona. The plug-in hybrid we tested was a 1.6-litre petrol engine mated to an eight-speed automatic gearbox, with a total power output of 225hp. The eight- speed auto is incredibly smooth-shifting, even under harsh acceleration, and the hybrid's switch between electric and petrol power is one of the most seamless we've ever seen/heard/felt.

Vauxhall says that when fully charged the Grandland X plug-in hybrid should deliver more than 30 miles of all-electric range. This is replenished - partially - by the petrol engine via systems like regenerative braking; just ensure you have the right box ticked on the car's menu so that the switch between petrol and electric is optimised, otherwise the car will prioritise electric power until the charged battery is empty.

Speaking of which, the battery takes about an hour and 45 minutes to charge up from flat when using a wall box charger, or around three and a half hours when using a standard three-pin socket.